Diner Pour Hiver with Wine and a Surprise

The dinner had been planned for months. It was the first time in 20 years that we’d joined friends for a co-op dinner. Each course would be prepared by a different person. The food would be French and so would most of the wines.

It was a cold night and we all sat close to the fireplace to keep warm and ate Dâtes Rouges de l’Egypte and  Figues Sêches de L Italie, both stuffed with Foie Gras.  We had discovered this taste sensation this summer in the Perigord and found it to be a perfect combination with Champagne.  The Dom Perignon 1999 was smooth with good bubbles and citrus and fruity aroma. The Bollinger 1999 Rose made from 63% Pinot Noir and 37% Chardonnay had a light pink color, with red fruit flavors and aromas and hints of cherry. 1999 was a good year, and these wines should last.  Both, however, were drinking very well now.

Our first course at table was a Tarte aux Legumes( Vegetable Tart) in a perfect pastry shell that melted in our mouths. The accompanying wine was a Chinon 2006 Bonaventure made from Cabernet Franc grapes in the Loire Valley. The wine was medium bodied with a lot of red fruit.  I have become a big fan of Chinon. They are very well priced and can age.

The main course was perfect for a cold winter’s night, a Cassoulet Toulousien, cooked to perfection and a perfect match with the Cahors 1995 Chateau Lagrezette made from Malbec, Merlot and Tannat grapes in Southwest France.  The wine was big and dark with black fruit, coffee and a hint of spice. (1995 was a very good year.) Another good complement with the cassoulet was the Chateauneuf du Pape 2001 Elizabeth Chamberlin. 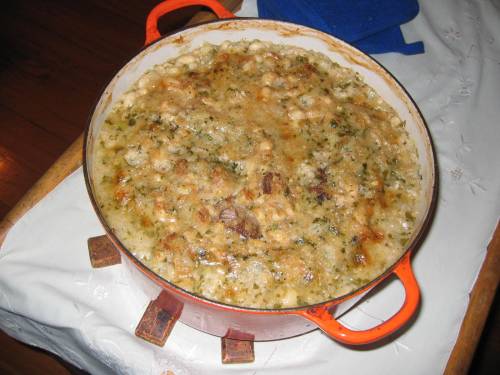 Tom had a 1989 Freisa from G.D. Vajra. I have never had a Freisa (a grape from Piedmont) that old. They are usually drunk young and are often sparkling. This one was dry and, to our disappointment, corked. Then we remembered a recent article in The New York Times, “Fix Corked Wine with a Bowl and Plastic Wrap”. Diane poured the wine into a bowl lined with a sheet of plastic wrap, making sure that all the wine came in contact with the plastic wrap.  After about ten minutes, she poured the wine from the bowl, and, to our surprise and delight, the corked odor and taste were gone.  We had not poured all of the wine into the bowl, so that we could make a comparison between the treated and untreated wine. The difference was amazing. The explanation – Infected corks have the molecule 2, 4, 6, Trichloroanisole, which is chemically similar to polyethylene and sticks to the plastic, according to Andrew Waterhouse, professor of wine chemistry at the University of California. Once treated, the wine went very well with our Plâteau de Fromages.

For dessert, there was a  Gâteau Mont St. Michel (apple crepe cake), accompanied by a Monbazillac 2005 Château Belingaed ( 2005 was a very good year).  It is made from the Semillon, Sauvignon and Moscadelle grapes in Southwest France. The grapes cannot be picked until they are “attacked” by Botrytis (the “noble rot”).  The wine was very rich, elegant and intense with hints of apricot, honey, peaches and oranges. When we were in the Perigord we found that it went very well with foie gras.

Last week at La Pizza Fresca, we had a bottle of Amarone that was corked. The odors were less apparent in this wine because there are so many different flavors. We tried the plastic wrap trick, and, again, it worked.  The difference in the smell and taste of the wine from the bottle and the bowl was very clear.   I think the waiter believed it was magic.

Let me know if anyone else has tried the plastic wrap, and if it worked.

On Mastroberardino Taurasi and Bollito Misto

When we invited friends for dinner yesterday, we had not realized that it was the day of the Super Bowl. Since it had taken a long time to get this group together, Michele, who was doing the cooking, and Ernie, who was bringing most of the wine, did not want to change the date. Needless to say, everyone showed up.

We began with a bottle of non vintage Krug Champagne, my favorite. It was big, luscious, and toasty.

The wine theme of the dinner was Taurasi, made from the aglianico grape, from the Azienda Vinicola Michele Mastroberardino located in the town of Atripalda in the province of Avellino in Campania. The first bottle opened was the 1985 Riserva. It had a very low shoulder which made us wonder if it would be good.  Fortunately, it tasted fine, with hints of leather and smoke. The next bottle, a 1977 Riserva was off.  The aroma reminded me of  bad cigar smoke.  The smell would not go away, or so we believed.   It was disappointing because 1977 was a good year and I have had this vintage before and enjoyed it.  I guess we do not drink great wines but rather great bottles. 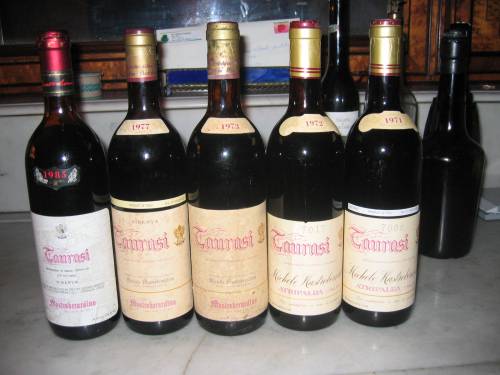 The Wines at the Dinner

Fortunately, I kept what was left of the bottle. We tried it with dinner tonight and the wine was great. It was not showing its age after being open for 24 hours. All of the off aromas were gone.  My conclusion is that we should have decanted it and given it more time to breath.

Bollito misto (literally, boiled meats) is a variety of different cuts and meats simmered in broth until tender. It is a specialty of Northern Italy and is at its best in Piedmont and Emilia-Romagna. The broth is served with cooked homemade pasta as a first course.  The meats follow with mostarda–which I love– fruits in a sweet and spicy mustard flavored syrup,  and green sauce (for more on the food go to www.michelescicolone.com).   The bollito misto was a good combination with the wine. 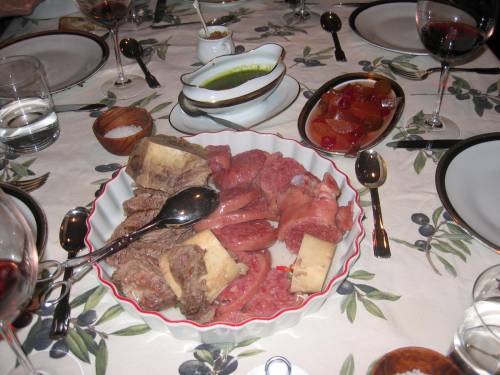 With the meats, we drank the 1973 and 1972 vintages of Taurasi which were both showing very well.  The last bottle was the1971. It was the oldest wine but still had plenty of life. We enjoyed it with cheese, an aged Piave and mild young Pecorino Toscano.
A few months ago I drank the 1969 and 1961 vintages of Taurasi.  Before that, the oldest I had ever drunk was the legendary 1968 which I was lucky to have on a number of occasions.  The 1961 was drinking as good as any of the 1968’s that I have tasted.

I have always been a big fan of the Mastroberardino Taurasi. The 1995 Taurasi “Radici” is a great wine and will last a long time.
Unfortunately starting with the 2001 vintage they have changed their style and the wine has become more modern. It is still a very well made wine but I wish they would have left it alone.