The Wine Media Guild had another of its very special tasting luncheons at Felidia restaurant in the spring. One of our members, Mark Golodetz, brought together for the first time two of the great Bordeaux Chateaus for a vertical tasting:  Longueville au Baron de Pichon-Longueville and Pichon-Longueville, Comtesse de Lalande. The vintages, 2000, 2001, 2002, 2003, 2004, 2005 and 2006, were tasted side by side. As if that was not enough, with lunch we enjoyed the 1985 Lalande,1989 Lalande,1990 Baron, and, last but not least, a guest of one of our members brought a 1975 Pichon-Lalande in a Double Magnum.

Some of the Wines

The speakers were M. Christian Seely, Manager of all AXA-Millesimes properties including Pichon- Baron, and M. Gildas d’ Ollone, Managing Director of Pichon-Lalande.

As I tasted the wines I noticed immediately that they are very different though they are across the road from each other and at one time both were owned by Pierre de Rauzan. The Lalande always seemed more developed, with deeper richer fruit and riper tannins. These are very elegant wines and one takes to them right away. M. Gildas d’Ollone said that the wines had a greater proportion of merlot which may be one of the reasons that they tasted this way. Someone asked him what the difference was between the wines of today and those of the past.  He replied that there is less Cabernet Franc grown in the Medoc today and more work is being done in the vineyards so the grapes are healthier and riper with riper tannins. He went on to say that it is very important to plant the right grapes in the right part in the vineyard.

These were wines that you do not take to immediately but have to spend time with, possibly due to the fact that they contain more cabernet sauvignon. Mr. Seely said that the wine must be an expression of the vineyard. Each individual parcel of land is set aside for a specific grape. Over the last ten years they kept down the yields and did away with everything that was not perfect in the vineyard.

The 1990 Baron and the 1989 Lalande in my opinion needed more time. Having wine with food changed everything and the Baron seemed to go better with the meal.

The wine of the tasting was the 1985 Lalande. One of the reasons for this was because it was at its peak. Of all the wines it was the only one that was really ready to drink. It was one of those wines which make you believe that Bordeaux is worth all that money.

The Wine of the Tasting -1985 Pichon-Lalande

When the 1975 Bordeaux first came out it was rated as a great vintage but many said that the wines were too tannic and would never be ready to drink. The 1975 Lalande was almost ready to drink and having it with lunch made a big difference. 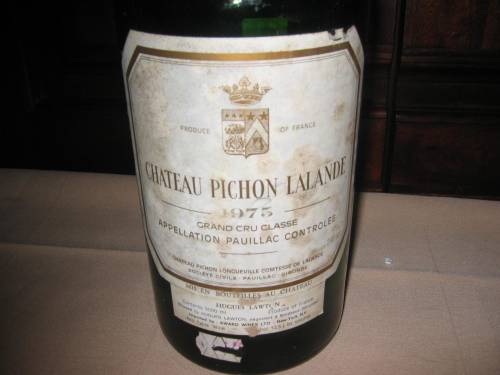 Most of the people at the tasting preferred the Lalande wines, though there was a small group that liked the Baron better. I did not really prefer one to the other. One was not better than the other; they were just different. For me it was amazing that in this day and age when many wines seem to taste the same we have a small miracle here. Two great wines across the road from each other, made from the same grapes, share the same climate and soil yet are so different that one could not be mistaken for the other. Viva La Difference!