I had just finished tasting all of the wine and was standing with a few other members of the Wine Media Guild when Olivier Bernard, the owner of Domaine de Chevalier stopped to join us. He is a very personable, charming man with a great sense of humor. We spoke about the differences in the wine and food when you move from one area of France to another and how the people in the area around Paris, the coast and the interior all have very different attitudes. 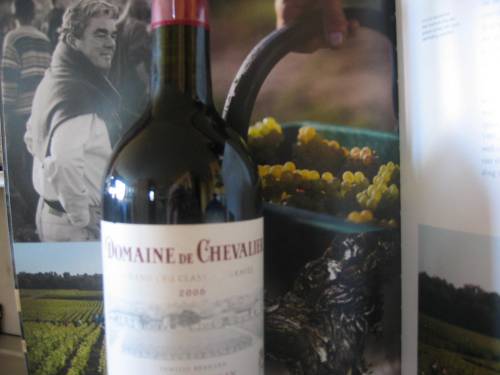 Later when he was speaking about wine, he caught my attention when he said that he had great respect for the terroir. Wine must be an expression of the soil and the wine maker must always keep this in mind. He went on to say that concentration in wine making is natural but extraction is human interference. It is easy to make big wine but difficult to make fine wine.

At the lunch that followed I was sitting next to Gabriel Vialard the Cellar Master for Ch. Haut-Bailly.  Mr. Vialard said that both properties are very close to each other but I could taste a difference in the wines. He said that part of the reason for this was the soil. At Domaine de Chevalier it is manily gravelly black sand, a subsoil of clay and gravel mixed with iron rich sandstone. At Haut-Bailly the makeup of the soil is different. There is a mosaic of soils, the best being a compact clay-based subsoil with gravel on top. 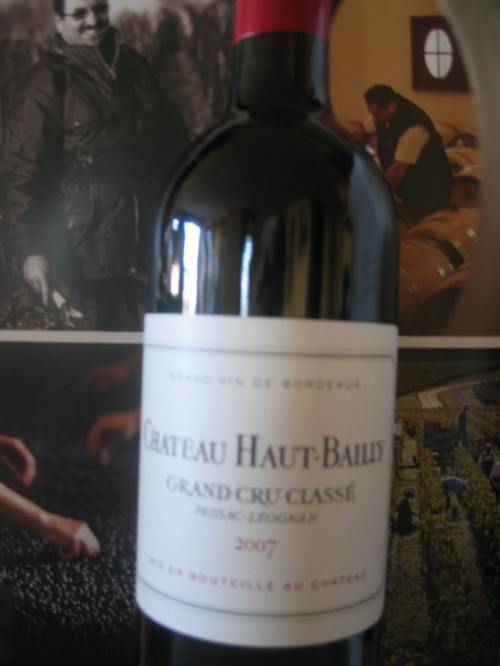 He also made it clear that they only make red wine. Of the vines planted 64% is cabernet sauvignon, 30% merlot and 6% Cabernet Franc.  What was unique was a 100 year old parcel of mixed vines: malbec, carmenere, and petit verdot and it represented 20% of the blend each year.

We tasted three whites from Domaine de Chevalier: 2007, 2005 and 2001. They all had a very pleasant grass aroma and flavors with a mineral quality and, good acidity .The 2001 was still very fresh and also complex.

Oliver Bernard said that his winery produced white wine made from 70% sauvignon blanc and 30% semillon. There is a very careful selection process in the vineyard, the juice is cold settled and fermented in oak barrels, 35 % of which are new. The wine spends 18 months in barrel, longer than any other dry white in Bordeaux.

The reds are made from 64% cabernet sauvignon, 30% merlot, 3% cabernet franc and 3% petit verdot.

We tasted the red wine side by side from 2007-2000.I asked Mr.Vialard about the vintages. He said that the 2001, 2004 and 2006 would last a long time. The 2005 is one of those great vintages that do not come along often. 2002 was a good value and 2003 lacked acidity; both were good buys but would not age well. 2000 was a wine with good tannin and 2007 was a light vintage and he put more cabernet sauvignon than usual in the blend. This wine would be bought by the restaurants in France because it will be ready to drink sooner.  He also believed that Americans made too much of the idea of “vintage”.

With lunch we had the 1990 Domaine de Chevalier which was a perfect match with the main course. Some of the members of the Wine Media Guild were kind enough to bring older bottles of Domaine de Chevalier. I was able to taste the 1985 and the 1982 which proved to me the wines can age. The 1979 seemed a bit vegetative but I only had a small taste.

The main difference in the wines was that the Domaine de Chevalier seemed more fruit forward with softer tannins. The Haut-Bailly seemed to be less forward, tighter and more tannic. When I mentioned this to Mr. Vialard he said he agreed, and then if I understood him correctly, he said that 15 years ago it would have been the reverse!

There was also a discussion by the speakers dealing with the Bordeaux market in this country. The biggest importer of Bordeaux in the United States has stopped bringing in the wine. They are trying to get rid of their inventory by “dumping” the wine (selling it for less). The speakers agreed that this was a problem but no one seemed to know if this would lower the price of Bordeaux  to the consumer.

The League of Gentle Men Drink and Dine at Restaurant Nizza

The League of Gentle Men Drink and Dine at Restaurant Nizza

Our first meeting of the year was held at Nizza restaurant, one of our favorite places.   Chef Andy D’Amico prepared a tasting menu, matching the food with our wine. Each member brought a bottle of either champagne, white, red or dessert wine. The results were: one bottle of champagne, two bottles of white, four bottles of red and two dessert wines. This made it easier for the chef to pair the food and wine.

The champagne was the  Krug 1996. I cannot say enough about how good this was. 1996 was a great year for champagne and this had all the best qualities that Krug has to offer.

The first white was the Trebbiano d’Abruzzo 2005 from Edoardo Valentini I decided the wine had to be decanted and that it needed to “warm up”.  It was a very cold night . This wine can age for 15 years or more and, like a great white burgundy; it should be served only slightly chilled to bring out all of its flavors and aromas. This is my favorite Italian white wine and in my opinion may be the best white wine produced in Italy. 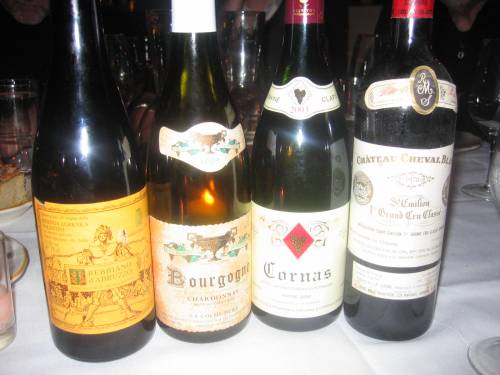 Some of the Wine

Bourgogne Blanc 1999 from Domaine Jean Francas  Coche and Dury- it is very difficult to find wine from this producer on the market. This is his least expensive white wine and it reminded me of a very good Meursault

Cornas 2003 Domaine Clap 100% Syrah. We decanted this wine also. It was a big wine and could have used five or six years more before it would be ready to drink. 2003 was a very hot year in France but this wine had very good fruit flavors, but was not jammy.

Chateauneuf du Pape 1995 Lucien Barrot et Fils.  This wine is so traditional that the grape bunches are not destemmed before crushing and is fermented in concrete vats.

Aging takes place in large barrles for about 1-3 years depending on when room is needed for the next vintage. Over the last 20 years there has been no fining or filtration. Here is a wine that gives new meaning to the term terroir and to the true flavor of the grapes. We also decanted it but it could have used a few more years of age. It was my kind of wine.

Chateau Mouton-Rothschild (Pauillac) 1982. Mostly Cabernet Sauvignon with lesser amounts of Merlot, Cabernet Franc,and Petit Verdot. This is a great wine in a great year and it lived up to all our expectations

Chateau Cheval Blanc 1978.(Saint Emilion) Made from Cabernet Franc and Merlot. The Mouton was a difficult act to follow but the Chevel Blanc was also right on the money.

Chateau d’Yquem 1991 Made mostly from Semillon with some Sauvignon Blanc. 1991 was not a great year for d’Yquem but it was a very good year. The wine was showing very well and still had many years left. 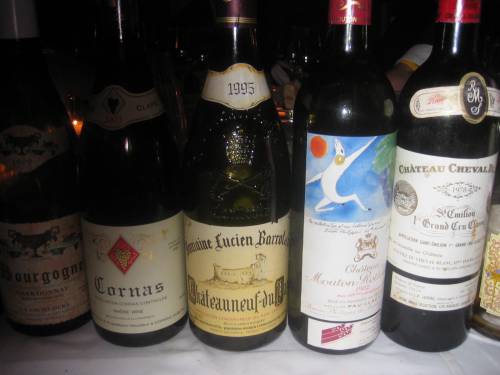 More of the Wine

Tokaji  1993  Aszu Essencia Disznoko  It is made from the Aszu grape. The grapes are late harvested and some are “attacked” by botrytis. The wines of Hungary are becoming more and more popular as the quality has improved since the fall of communism.  Tokaji has always been a great dessert wine but suffered in those years. They are now back in top form. The Essencia is the rarest and the process in very complicated.

We drank the d’Yquem and the Tokji side by side and both were great but I gave the edge this night to the Essencia.

We always dine well at Nizza and tonight was no exception. I especially enjoyed the mortadella, eggplant involtini, calamari fritti, the porchetta and the veal scallopine. Last time I was there with Michele we did not like the pizza but this time it was terrific and we tried a number of different ones!

The League of Gentle Men had its last official wine dinner of the year at Gramercy Tavern.  We decided to do French wines: Champagne, Burgundy, and Bordeaux .Michael Anthony, the executive chef, matched each wine with a different course. There were six members at the dinner.

We started as we always do with champagne. This time it was the Dom Perignon 1996 Rose’. 1996 was a great year for Champagne and this wine proved it. There were aromas of pink grapefruit and pomegranate and it was fresh and fruity. The second champagne was Krug 1982, also a great year for champagne. 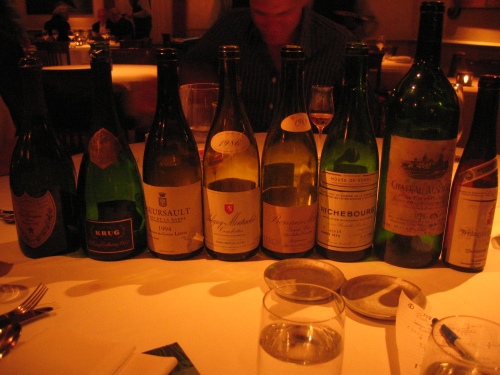 One of our members always brings Krug. The 1982 was elegant with good fruit but still had that Krug structure and body. It was a great food wine. These were two of the best champagnes I had last year!

Meursault Clos de la Barre 1994- Domaine des Comtes Lafon (Cote de Beaune)-This wine was a complete surprise for me. It is difficult to explain because to me it tasted so good that it would be very difficult to put it in words. I just sat back and enjoyed it.

Bonnes Mares 1969- Leroy (Cote de Nuits)-This is the third time that I have been lucky enough to taste this wine in the last three months. It is everything a great Burgundy should be.

Richebourg 1972- Domaine de la Romanee Conti (Cote de Nuits)–it was showing its age a bit but still a great wine in what some might say was not a great year.

Ausone (magnum) 1988 (Saint Emilion) 50% Merlot and 50% Cabernet Franc–I believe that it is one of the few red wines that do not undergo malalactic fermentation. It could not have been better.

One of our members always brings a dessert wine but does not tell us in advance the name of the wine or the producer. He always waits until we are finished with all the other wines before he brings it out .I believed that I had copied down the name. The wine was a 76er(year) from Germany, but when I tried to look up the name on-line, I kept on getting the German phone book white pages. No one seems to remember the name, but it was very good and I will try to find the name of the producer. The wine was a 76er BA Weingut Gernot Gysher- next time I will write down the names of all the wines before I begin to drink