Fiorano Rosso ” The Noblest Roman of Them All”

Fiorano Rosso: Wine Made by a Prince Fit for a King 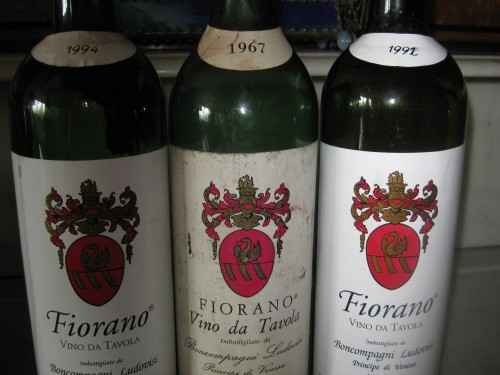 When in Rome, I go to wine stores looking for a very rare and special wine, Fiorano Rosso.  I make the rounds of stores like Trimani, Enoteca Cavour, etc., and ask if they have any.  The answer is always the same, “not any more”.

About ten years ago I got lucky and found the 1991 vintage at Trimani. I brought as much as I could carry. One of my favorite restaurants, Checchino dal 1887, had vintages going back to 1961 but I guess I drank them all!  For a very brief time, the 1982 was imported into the United States.

Once I found three cases of the 1971 at auction. I do not have any more 1971 or 1982 left. However I gave a 1971 away because it was the wedding anniversary year of very good friends. They still have the bottle and I am trying to get them to open it for me. I will be in Rome again in September but have little hope of finding any more Fiorano Rosso.

Every two weeks for the last few years I would go to the internet and type in the word Fiorano. The response would always be the same.  Two Fiorano Bianco’s were available, one made from Malvasa Candia and the other from Semillon.  They are easy to get — but the red that was a different story. I kept on searching  and to my amazement found a store that listed the Fiorano Rosso ,the 1992 and 1994 vintages.  I called the wine store and the salesperson gave me the third degree, wanting to know if I was familiar with the wine because it was “very particular”?   I told her that I have been drinking the Fiorano Rosso since 1981 and was familiar with vintages as old as 1961.  I asked how many bottles were available and said I would take all of them. However there was a problem, they did not know when the wines would arrive. Finally six months later they called and said the wine had arrived. For some reason I only could purchase 14 bottles. 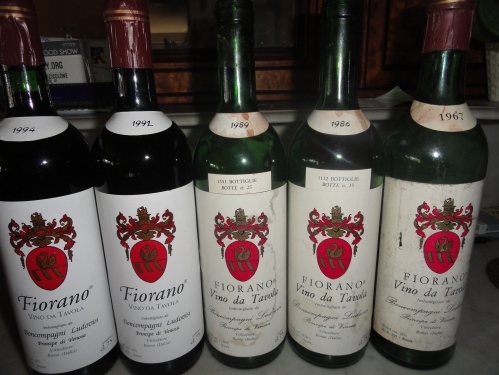 Often I am asked if I have a favorite wine. This is a very difficult question to answer, because with different foods and at different times I like different wines. However if I really had to name one it would be Fiorano Rosso. It is a wine made by a prince and fit for a king. This is a full bodied wine with great depth. The flavors and aromas of leather and cherry dominate making it a unique drinking experience.

The wine was made by Alberigo Boncompagni Ludovisi, Principe di Venosa with merlot and cabernet sauvignon grapes.  Burton Anderson, in his landmark Italian wine book Vino, called Fiorano Rosso “the noblest Roman of them all”.  The Prince’s few aces of vines are planted along the Appian Way about 20 kilometers southwest of the center of Rome and almost right next to Roman’s second airport, Ciampino. It is the best cabernet/merlot blend made it Italy and one of the best in the world!  In my opinion–and I am in the minority here–one of the best places in the world to grow Cabernet Sauvignon and Merlot is in Lazio close to Rome.

The Boncompagni Ludovisi family is one of the oldest in Rome and includes a pope (Gregorio X111 who was born Ugo Boncompagni).  When it comes to wine the Prince goes his own way.  He is a traditionalist and may have been one of the first to practice organic farming.  Marchese Piero Antnori of Tuscan wine fame is the Prince’s son-in-law, but unfortunately, they not get along.  The Prince said he would destroy all his vines rather than see Piero get hold of them.  I do not think he likes the modern methods that Piero uses to make Antinori wine.  When the Prince was asked if he would save the vines for his grandchildren, he said that they learned about wine from their father, Piero, and not from him.  The prince’s wine consultant was the late Tancredi Biondi-Santi, also a traditionalist, of Brunello fame.   The Prince has a passion for his vines and his wines and does not give interviews.  Even the late Luigi Veronelli, the dean or Italian wine writers, had a very difficult time with him.

Eric Asimov, The New York Times wine columnist, went to Rome and tasted the Fiorano white wines, which he liked very much.  He wrote an article about them, “An Italian Prince and His Magic Cellar” (Dec. 22 2004).   I enjoyed reading the article and also like the white wines.  Not long after the article was printed, I was invited to taste wines at The Times with Mr. Asimov.  I told him that I had three vintages of the red Fiorano from 1991, 1989 and 1986. He was very interested so I invited him for dinner.  It took four years and finally  he came to dinner. Michele made lasagna from the town of Anagni just south of Rome; followed by lamb shanks (The recipe is available in her book, The Italian Slow Cooker.)  We also drank the 1990 Torre Ercolana from Cantina Colacicchi in Anagni, made with Cabernet Sauvignon, Merlot and a local grape, Affilan Cesanese.  This wine is only available at the Trimani wine store in Rome.  The main course was a simple roast lamb, a perfect combination with the Fiorano. This was the first of three dinners over the next two years.

Fiornao Rosso and "friends" at the dinner in March 2010

Sadly, the prince stopped making wine commercially in 1995 because of his age and that of the vines. When I ask friends in the wine business in Rome about what has happened, they tell me that the property is so close to Rome that there might be pressure to build condos.

Some wine writers have compared Fiorano Rosso to Bordeaux and others to Sassicaia.  I can see the comparison to great old style Bordeaux but not to Sassicaia. Fiorano Rosso was made with great passion and with no concern for the opinion of wine writers, the wine market, or economics.  It is a traditional wine which brings out the terroir and the true character of the Cabernet Sauvignon and Merlot grapes.

There is mixed opinion on which is the better wine the white or the red.  A few years ago, the prince sold off 14,000 bottles of his white wine but none of his red. When he pulled out his vines he only left a small amount of Cabernet and Merlot. Which wines do you think the prince preferred!?

Fiorano and "friends" and the first dinner

Last year I was invited to Montefalco for a tasting of Sagrantino.  Wine writers and buyers from all over the world attended the event. At dinner the first night, I was talking to a gentleman from Holland and he mentioned Fiorano Rosso and was surprised when he heard that I know about it. He had never tasted it but had read Sheldon Wasserman’s book Italy’s Noble Red Wines.  After a long discussion he mentioned that he had two bottles and would send me one. I could not believe my ears. The difficult was that he could not send it to the United States. I told him I would be in Italy in Dec. and he could send it to the hotel. He was as good as his word and a bottle of 1967 Fiorano Rosso showed up at the hotel.

A few months ago I was in La Pizza Fresca in Manhattan and I began talking to a man and his wife who were customers of a wine store where I had once worked. He said that he read my articles and that he had a few bottles of Fiorano Rosso. I said we should have dinner together and asked him for his card. He did not have any with him, so I gave him mine and told him to contact me. So far he has not. So if you read this, please contact me so we can have dinner and drink Fiorano Rosso together.

28 responses to “Fiorano Rosso ” The Noblest Roman of Them All””