Stirred not Shaken: The Perfect Martini

The first night of the cruise aboard the Crystal Serenity I ordered a Martini made with Beefeater Gin and olives.  I did not watch while it was being made and it was fine.

The next night, Tony Abou-Ganim who calls himself “the Modern Mixologist”, was behind the bar making the drinks.  I asked for a Martini and he said “let me make it for you the way I like it”.  He said that a Martini should be 4 parts gin to 1 part dry white vermouth and to contrary to what James Bond preferred, it should be stirred, not shaken.  Tony said that shaking aerates the drink, which destroys the texture. Only foamy drinks such as a whiskey sour should be shaken.  Shaking also causes the ice to melt and the drink to become watered down.  Water is an important part of the drink, but should be no more than 20%.  Tony feels that a twist of lemon is needed and either two or three green olives, which should be cold.  The entire drink should be poured into the glass, which should be chilled.  If any of the drink is delivered in a container or held in a container on the side it will become watery.

Tony said that he only drinks gin Martinis. Vodka, he feels, does not mix well with vermouth. He likes vodka but not in a Martini. 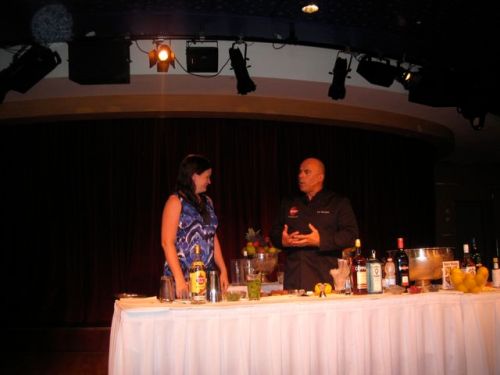 Tony talking during his class

Most people drink their Martinis too dry, Tony said, and they do not understand the drink.  Only buy vermouth in a small bottle because after a month, an open bottle becomes stale and it should be discarded. The ice should be fresh, the olives should be cold, and the lemon peel twisted over the drink to release the lemon oils. He made my Martini with Beefeater, which is my favorite gin for a Martini.  It was the best that I have ever had. There was a silky quality to it with great balance and flavor!

One day at sea, Tony did a very interesting demonstration and class on mixed drinks and started off by giving everyone a glass of a Champagne-based drink I think he called “The French 1875” to put everyone in the right mood. It was also a participation class and Tony invited people to join him to make the drinks.  He is known for creating a drink called the Cable Car and Michele liked the way he made her Negroni.  Here is his website: www.themodernmixologist.com

2 responses to “Stirred not Shaken: The Perfect Martini”