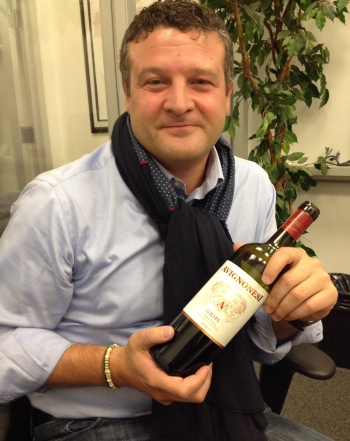 The speaker was Giuseppe Santarelli, North American Manger for Avignonesi.  He said that the winery was founded in 1974 and remained in the same family until 2009 when Virginie Saverys purchased it.  Ms. Saverys is a believer in organic and biodynamic viticulture and hopes to get organic certification for the winery by 2016.  She also wants the wines to express the terroir and is using fewer new barriques.  This was evident when I tasted the wines.  All the grapes are estate grown.

Rosso di Montepulciano DOC 2011  made from 90% Sangiovese and 6% local red varieties. The grapes come from five different vineyards. The soil is sub-alkaline to alkaline, with layers of clay, sand and silt.  The vineyards are at 279 to 330 meters. The vines are bush and cordon-spur trained and are between 10 and 35 years old. In the older vineyards there are 3,300 vines per hectare and in the younger ones 7,158. Harvesting took place between September 10 and 20. The grapes were selected berry by berry by use of the optical technology of Vistalys (sorting the grapes by machine). The grapes were lightly crushed and transferred to temperature controlled stainless steel tanks for a 3-day-prefermentation maceration. The alcoholic fermentation proceeds naturally with indigenous yeast.  A combination of delestrage (two step rack and return process) and remontage (pumping over) is used to manage extraction from the cap.  Malolactic fermentation takes place in oak. The wine was aged for 6 months in barriques (second and third passage) and large oak casks of 150hl. This is an easy drinking wine with a nutty character and hints of cherries and violets. It is a good food wine.   $19 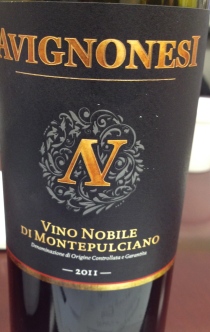 Vino Nobile di Montepulciano 2011 DOCG made from 100% Sangiovese. The fermentation is like the Rosso but with longer skin contact. The wine spends 18 months in oak, 70% in barriques (30% new) and the rest in large oak casks 150hl. The wine is aged in bottle for a minimum of 7 months before release. Giuseppe said that up to 30% of other grape varieties can be used in Vino Nobile but they chose not to do so. This is a wine with hints of wild cherries red currants, rosemary and a touch of spice. $30

Merlot “Desiderio” DOC 2010 made from 85% Merlot and 15% Cabernet Sauvignon. The Merlot comes from the Paggino vineyard of La Selva estate and the Cabernet from the Selva Nuova and Selva Vecchia of the La Selva estate, which is located in the Cortona DOC appellation.  Giuseppe said that the soil is different here than in Montepulciano. In Cortona there is more clay and limestone, and is better for Merlot and Cabernet. The vines are at 250 to 300 meters and the exposure is south, southwest. The vines are 12 to 22 years old, they are bush trained and there are 7,158 vines per hectare. The Merlot was picked on September 27th and the Cabernet on October 10 and 11. There is four weeks of temperature controlled alcoholic fermentation with maceration on the skins in stainless steel tanks.  Malolactic fermentation was completed in French barriques. The wine is aged for 16 months in French barriques, 35% new and 65% second passage. This is a complex full bodied wine with hints of blueberries and strawberries and nice acidity.  $57

When I saw the Grifi being poured I said to Giuseppe, “I thought that they stopped producing this wine.”  He said yes, they had stopped producing it in 1997 because the demand for the Sangiovese for the Vino Nobile was so great that had to use it there. However, with the recent purchase of new vineyards they were able to bring it back into production and the 2010 is the first vintage. 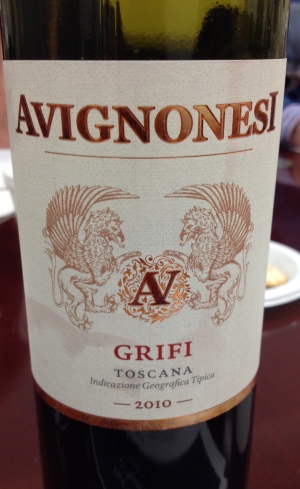 Toscana IGT “GRIFI” 2010. Made from 60% Sagiovese and 40% Cabernet Sauvignon. The Sangiovese comes from the vineyard parcel “Poggetto di Sopra” of I Poggetti Estate and the Cabernet from the parcels “Selva Nova” and “Selva Vecchia” of the La Selva Estate. The La Selva has a north-south exposure and the I Poggetti Estate western. There are fluial origin clay and sand layers at the La Selva Estate and a matrix of clay sand and silt at the I Pggetti Estate.  The vines are 8 to 12 years old and bush trained (7,158 vines/hectare) at the La Selva Estate and 39 years old and guyot trained (2,564 vines /hectare) at I Poggetti. The vines are at 270 to 300 meters. The Sangiovese is hand harvested on September 29 and 30 and the Cabernet is machine harvested on October 10 and 11. Separate fermentation for each in stainless steel tanks with indigenous yeasts. Alcoholic fermentation and maceration on the skins lasts from 20 to 24 days, depending on the vintage. The malolactic fermentation was completed in French barriques. The wine is aged for 16 months in French barriques, new oak for the Cabernet and second and third passage for the Sangiovese. The wine has aromas of fresh red fruit, a hints of cherry, raspberry and spice with a long finish and pleasing aftertaste- it was as good as I remembered it! $57

Giuseppe said that the La Stella parcel of one of the vineyards is in front of the old Le Capezzine winery and is very unique. What makes this parcel unique is that the bush trained (alberello) vines are planted in the settonce system, hexagon shaped. Ancient Roman military engineers invented this system to give the vines maximum exposure to the sun and circulation of air.  Each vine is in the center of a hexagon surrounded by six other plants, equidistant from each other. None of the vines cast a shadow on another vine. I have seen the settocne system in Southern Italy but never in Tuscany. Giuseppe said that they are the only producer to use this system in Tuscany.