Recently La Pizza Fresca Ristorante in NYC celebrated its 20th anniversary. The restaurant was one of the very first in the city to serve genuine Neapolitan style pizzas and it has one of the best wine lists in the city. Brad Bonnewell, the owner, created the list and he often hosts wine dinners at the restaurant. 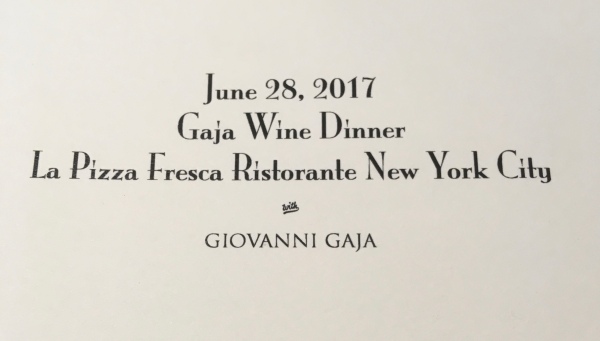 I have been going there since it first opened and recently Brad invited me to a dinner featuring the Barbaresco of Angelo Gaja.

Representing the winery was the charming and knowledgeable Giovanni Gaja, Angelo’s son. I was lucky enough to sit at the same table as Giovanni and therefore could ask him a number of questions.

Giovanni is 24 years old and most of the wines we tasted were older then him. He is the youngest child and his youngest sister is 14 years older than him. He joked that it was like growing up with 3 mothers.

Angelo’s children convinced him to return to 100% Nebbiolo for the Costa Russi, Sori Tilden and Sori San Lorenzo. Giovanni said that before the DOC (1966) laws Barbaresco could contain other grapes, predominantly Barbera. So Angelo had detached the wines from the DOC appellation in order to produce them as they were in the past. Beginning with the 1996 vintage Angelo Gaja used 15% Barbera in these wines.

Giovanni said every generation has the right to do things in their own way.

So from the 2013 vintage their single vineyard wines are 100% Nebbiolo.

He added they have the full support of their father, and “We can now pursue the pure expression of the Nebbiolo grape once again.”

Giovanni said that Angelo had joined his father in the winery in 1961. In 1978 he changed Barbaresco forever with the introduction of barriques and other new techniques. We can only imagine what Angelo’s father thought of this and of his planting of international grapes such as Chardonnay and Cabernet Sauvignon. That same year, Angelo took a prime Nebbiolo site and planted it with Cabernet Sauvignon. Legend has it that when Angelo’s father passed the Cabernet vineyard he would mutter “Damagi,” meaning “what a shame or a pity,” or “Damn It” and so the vineyard came to be called Damagi.

So Giovanni and his sisters were just following in their footsteps of their father by doing things the way they wanted. I asked Giovanni if the regular Barbaresco was made the same way today as it was when Angelo took over in 1978. His answer was “yes” adding that they still use a combination of barriques and large barrels (botti).

Giovanni explained in detail about the 6 wines we tasted. “Barbaresco is the wine that we have always been producing for 5 generations. It is a blend of 14 different vineyards of Nebbiolo mainly located in the Barbaresco area and a small parcel in the Treiso area at an altitude ranging from 250m to 330m covering an area of 21.4 hectares. Each vineyard undergoes fermentation and maceration separately and we let fermentation take its course. According to the vintage, it can take longer or shorter period of time. After fermentation, the wine from each vineyard ages one year separately in small French oak barrels, mostly used and a small part new oak. Usually the ratio is 80% used and 20% new. After one year the wines are blended together and undergo a further year of aging in big barrels. Finally, the wines are bottled and spend a further period of aging in bottle before being released on the market to let the wine settle and balance.”

The regular Barbaresco is made from 100% Nebbiolo. Here are the wines we tasted: 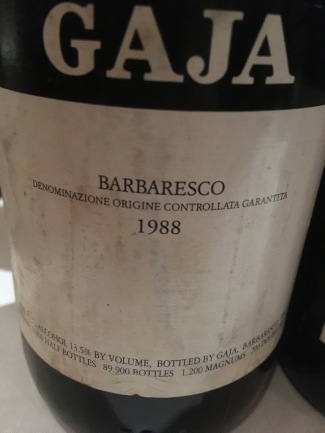 Barbaresco 1988 — the bottle that we had seemed a little tired for its age. There was a discussion at the table and someone said they had a bottle of the 1988 recently and it was fine. We just got an off bottle. The aromas on all of the other wines were classic Nebbiolo with hints of black cherry, violets, blackberries, tobacco, leather and tea. 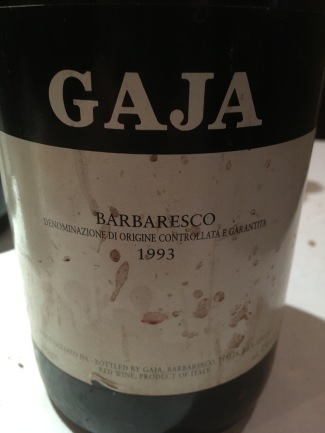 Barbaresco 1993 — was not a great vintage for Barolo but the wine was showing very well and will last for a few more years.

Barbaresco 1997 — was showing very well and most of the people at the table liked this wine along with the 1990.

Barbareso 2000 — this vintage got mixed reviews but Gaja produced a very good wine.

Barbaresco 2013 — this wine needed more time but has great potential.