A Taste of Venice with Brindiamo!

Osteria da Fiore is one of the most highly acclaimed restaurants in Venice. Recently Mara Martin, the chef and owner along with her husband Maurizio, visited New York City to offer cooking classes at The Michelangelo Hotel. 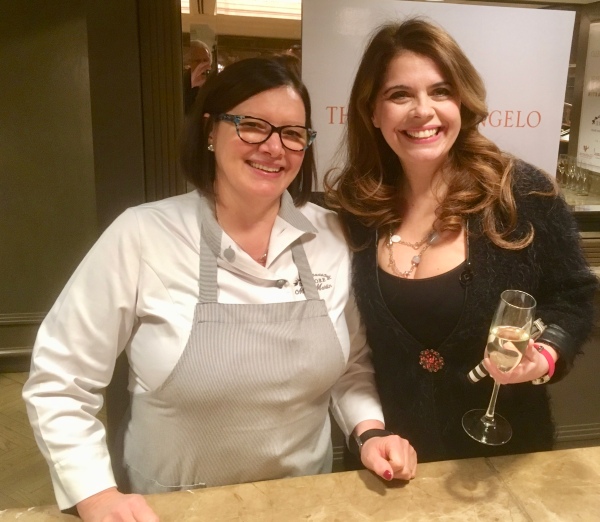 Charles and I were delighted to attend a demonstration class and lunch tasting of Mara’s Venetian specialties hosted by Ornella Fado, the charming and dynamic host of the public tv program, Brindiamo! (We watch it every Sunday, and you should too if you are a fan of Italian food and wine.)

Mara’s son Damiano, who manages Mara’s Venetian cooking school and has a Venetian restaurant of his own, accompanied her and translated. The first dish that Mara prepared was a Black Squid Ink Risotto. 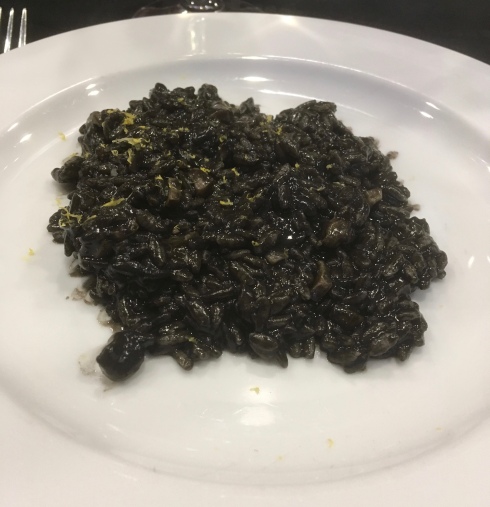 Mara explained the ingredients she was using, especially the enormous seppia, which is a member of the squid family. 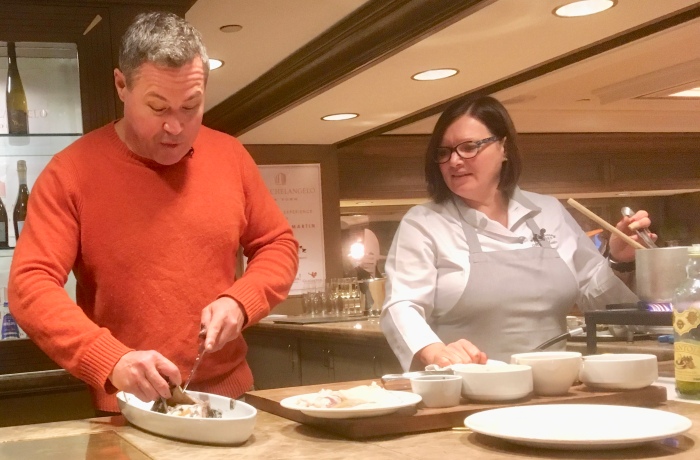 Jeff Corwin, a biologist who hosts the ABC-TV show, Ocean Treks, and an old friend of the Martin family, was on hand to describe the differences between seppia and squid which are part of the same family, while Mara made the risotto. Mara stressed the importance of using only the freshest seafood and told us that likes to buy the squid or seppia uncleaned so that she can harvest the ink and use the liver, which are typically discarded in this country by the fishmonger. Both add a lot of flavor and the characteristic color to the risotto.

Once the risotto was done, Mara explained how she makes fish in saor, an iconic Venetian dish, which is typically made with sardines topped with an onion and wine vinegar sauce. The sauce is poured over the fish and left to marinate for several days so that the flavors blend and mellow. 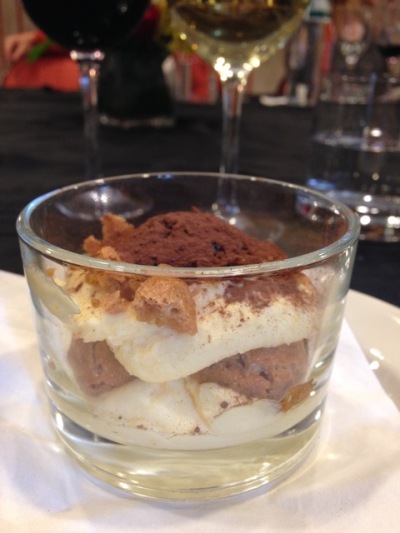 Finally, Mara demonstrated how she makes tiramisu, which is not like any we had ever tried before. Italians usually make tiramisu with raw eggs, but because Mara finds their flavor too heavy and many guests have allergies, she substitutes pureed pumpkin which gives a beautiful color and smooth texture to the creamy filling. And in another break with tradition, Mara uses amaretti cookies soaked in sweet Marsala to layer with the cream rather than lady fingers and coffee. 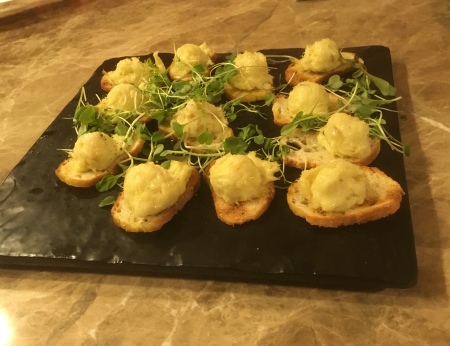 By this time we were very hungry, and we enjoyed the crostini di baccala mantecato that Mara had made for us with glasses of Prosecco. Baccala is dried or salted cod that is reconstituted by first soaking and then cooking in water. The cooked fish is whipped in an electric mixer with olive oil until it becomes light, fluffy and spreadable on toast.

While Mara cooked, Ornella and the Brindiamo! staffers fielded questions from the observers and filmed Mara’s and Jeff’s responses. 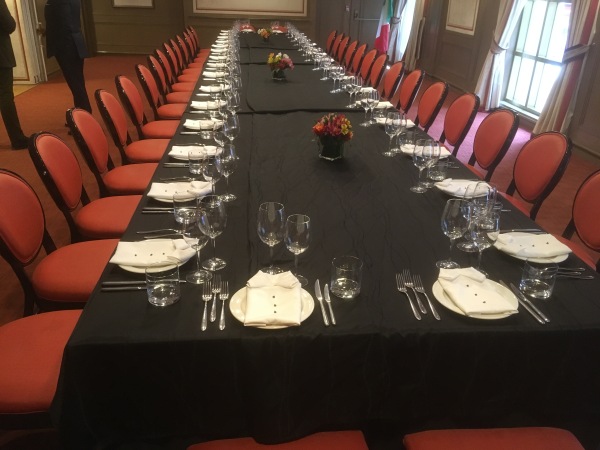 Finally, Ornella invited us to the elegantly set table in a private dining room.

We were served an assortment of dishes that Mara prepares at Osteria da Fiore including the black squid ink risotto, fish in saor, 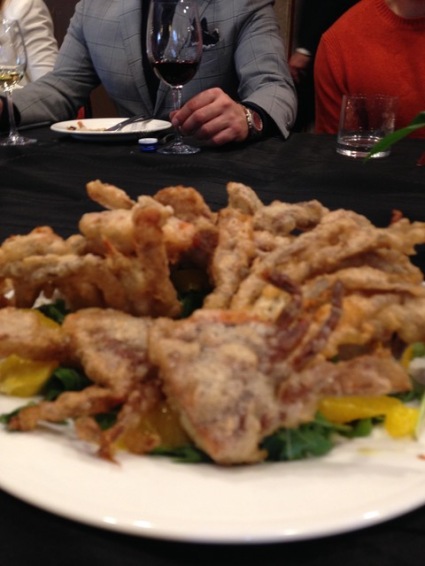 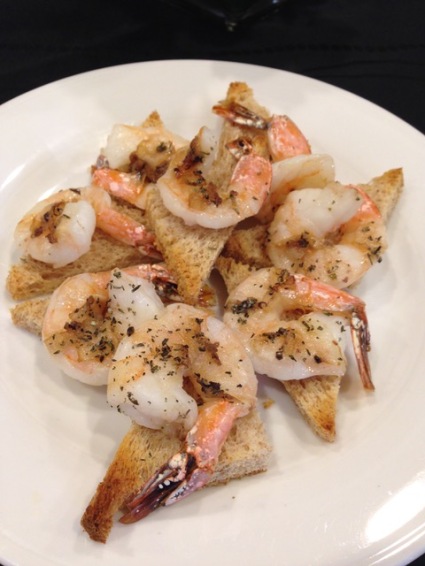 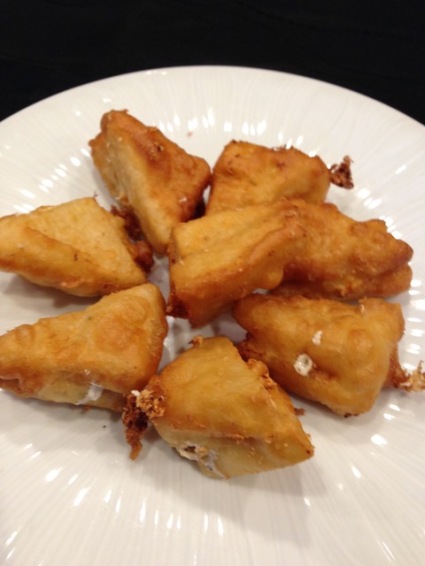 and mozzarella in carozza, deep fried sandwiches stuffed with mozzarella. Finally, there was Mara’s unique tiramisu, 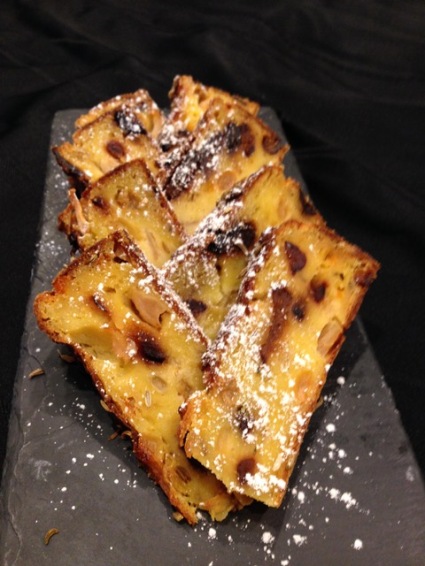 followed by pinza, a cornmeal and raisin cake and cookies. 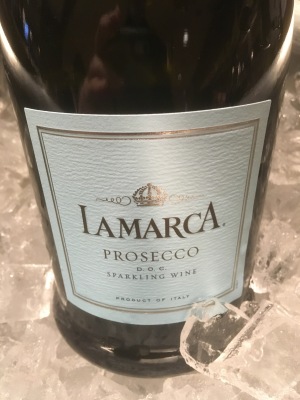 We started with La Marca Prosecco

Then the importer/distributor, Tony Margiotta, of Gladiator Wine Distribution, described the wines he had provided. He said that the winery, Castellucci Miano, practices sustainable agriculture. No pesticides or dangerous chemicals are used and the grapes are hand picked. He called it a “natural wine.” He told us that Perricone is Sicily’s oldest existing wine grape going back 2,500 years. 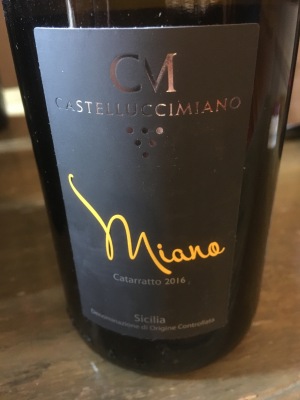 Castellucci Miano, “Miano” DOC,  2016 100% Catarrato, Sicily  The vineyards are located on the slopes of the Madonie Mountains at 700 to 900 meters. The training system is alberello and sapling and the average age of the wines is 20 years. Sandy and clay soil with an alkaline reaction due to active limestone. Harvest takes place in October. Fermentation takes place at a controlled temperature of 16C. The wine remains in stainless steel tanks for 3 months and in bottle for 2 months before release. This is a wine with hints of ripe citrus fruit and red apple with good minerality and acidity. 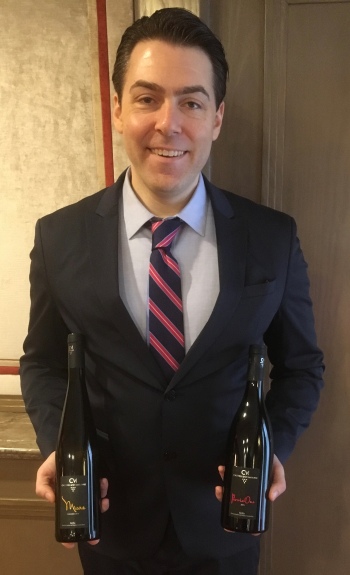 Tony said that catarrato means cataract, or waterfall in English because when you swirl the wine in your glass, the wine slowly falls back down to the bottom of the glass like a waterfall with naturally occurring bubbles. These bubbles are not carbonation but a natural characteristic of the Catarratto grape. 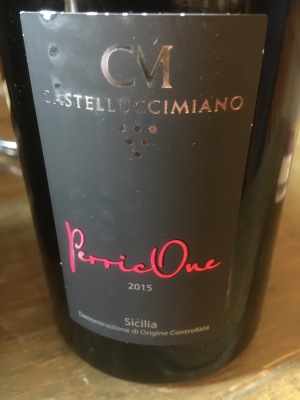 Castelluccio Miano “ Perric One”  DOC, 2015 Sicily, 100% Perricone The average age of the vines is 20 to 30 years and the training method is guyot and spur-pruning. Before fermentation, the grapes are dried, then the wine is made using the “ripasso technique”. Traditional red wine fermentation with pump over during the initial spontaneous fermentation stage. Complete malolactic fermentation. The wine is aged for 3 months in steel tanks, then 10 months in small oak barrels and another 6 months in bottle before release. This is a full-bodied red wine with aromas and flavors of dry fruit with a nice aftertaste and long finish