I first met Luca Arrigini when he was with the master pizzaiolo Roberto Caporuscio at Kestè on Bleecker Street.

Luca opened Pizzeria Sottocasa in Brooklyn and Michele and I tried it several years ago. We really liked the pizza but somehow we did not have the opportunity to return.

Two weeks ago friends that live in Harlem said they have been ordering pizza from their local branch of Sottocasa and invited us to join them there. We were glad to go.

Luca is from Milan and now lives in Brooklyn where he normally works, but he told me he would meet me at the Harlem location when I came. His partner Matteo Prospiti and his wife Elena live in Harlem so they are typically at that location.

We started with gluten free focaccia because one in our party is on a gluten free diet. It crisp, tasty and very good.

Next we had a regular Margherita made with tomatoes, mozzarella and basil. The crust was flavorful and well risen and a light dusting of semolina underneath gave it a subtle crunch. The toppings were good, too. The tomatoes were sweet and the mozzarella fresh tasting.

After that we tried the Napoli made with tomatoes, mozzarella, anchovies, oregano and basil which we also enjoyed.

Our friend ordered a gluten free Margherita, which was very good for gluten free.

The last pizza was a Laura, named after Luca’s wife. It was topped with tomatoes, mozzarella, mascarpone, speck and rosemary.

Luca said they make Neapolitan style pizza because he believes it is the best pizza of all.

The dough is made with Caputo 00 flour and rests in different stages for 48 hours, though it is usually never used before 60.

They use only Italian organic tomatoes for their sauce, freshly crashed and with just a little salt added. Fior di Latte mozzarella from Wisconsin is the cheese they use. They break the cheese by hand everyday to insure the right texture. The extra virgin olive oil is from Sicily, labeled directly for Sottocasa.

We also enjoyed the generous salads, which were lightly dressed and a good complement to the pizzas.

Brunello di Montalcino 1990 from Livio Sassetti made from 100% Brunelllo. The wine was drinking very nicely, showing no signs of age and should last for a number of years. 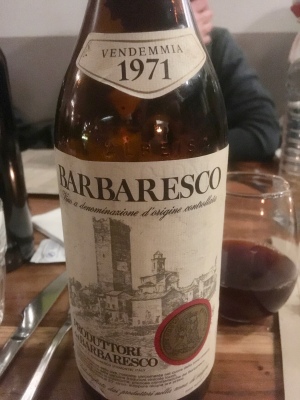 Barbaresco 1971 from Produttori del Barbaresco made from 100% Nebbiolo. This has developed into a classic mature Barbaresco and is a pleasure to drink.

Both wines were a perfect complement to the pizza.

Matteo offered us two amaros and said because they were across from a school they did not have a liquor license and only could serve wine. The two Amaros were wine based.

The first was Pasubio Vino Amaro from G Cappelletti which was very nice but a bit too fruity.

The second, Cardamaro Bosca, was stronger and with more herb and spice flavors. We all really liked it.

4 responses to “Pizza at Sottocasa”