The “Finally Brunello” Tour, conducted by the Consorzio del Vino Brunello Di Montalcino, included 3 events this year at Il Gattopardo Restaurant and I was able to attend all three.  Members of the Wine Media Guild were invited to the latest one, which included a tasting followed by lunch.

The 2016 Brunello di Montalcino is an epic vintage. A balanced summer and autumn gave the grapes perfect ripeness. The right rains and temperatures never too high made this year one of the most important ever. I am paraphrasing one of the producers and it seems like both producers and wine writers were saying the same thing. 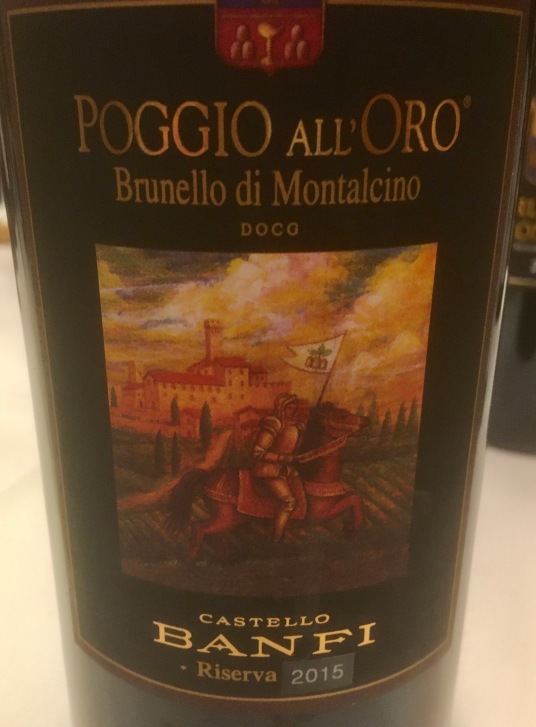 Banfi 2015 Poggio all’Oro Riserva made from 100% Sangiovese and only produced in great vintages. The soil is brown clay silt sediments with stones and pebbles of Calcareous origin, well structured and well drained. There is a trellising system, spurred cordon, and there are 2,100 vines per hectare. Fermentation is in temperature controlled hybrid French oak and stainless steel tanks. 70% of the wine is aged in French oak casks 60 to 90 HL and 30% in French barriques 350L for two years and 6 months. This is an elegant and complex Brunello with hints of licorice, plum, tobacco and a note of violets.

Capanna Riserva 2015 made from 100% Sanviovese. The vineyards are at 300 meters and the exposure is south/east. The vines are 25- 32 years old and there are 3,300 to 4,500 vines per hectare. Harvest is by hand from the last week of September to the first week o October. Alcoholic and malolactic fermentation take place in oak vats at a controlled temperature. The wine is aged for 40 months is Slavonia oak barrels of 10/25 HL. The wine remains in bottle before release. The wine has hints of cherry, blackberry, and plum with a balsamic note. I drank this wine with lunch.

Argiano 2016 made from 100% Sangiovese. The soil is clay with a high level of limestone and the vines are 12 to 55 years old. The training system is spurred cordon, organic, small quantity of grapes per vine. Harvest took place during the month of September. The grapes are cold soaked prior to fermentation. Spontaneous fermentation takes place over two weeks in temperature controlled stainless steel tanks. Malolactic fermentation occurs naturally in cement tanks. The wine is aged for about 30 months in Slavonian oak barrels of 10/15/30/50HL. The wine is bottled in April/May during the most favorable moon phases. There is a long bottle aging before release. The wine has hints of red fruit, notes of aromatic herbs and a touch of spice. 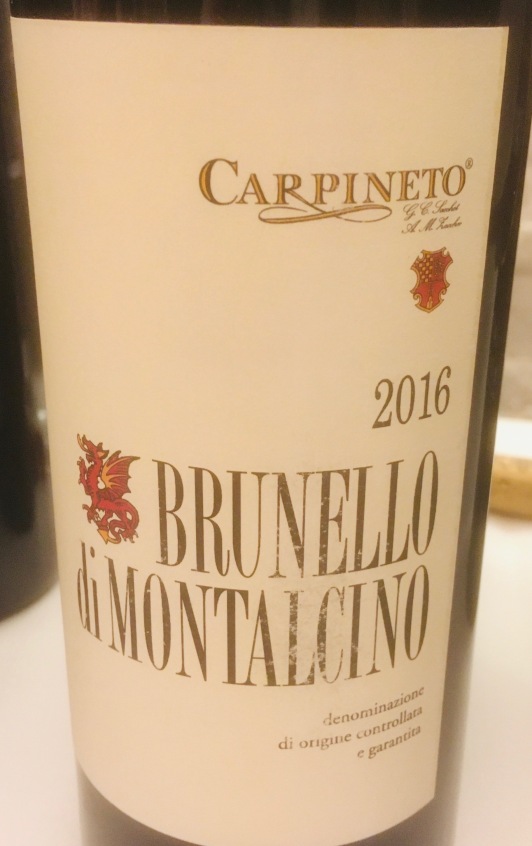 Carpineto 2016 made from 100% Sangiovese Grosso and the vineyard is at 500 meters. The sedimentary soil has a galestro frame with clay accumulations dating back to the Eocene era–15 million years ago. There is a medium length steeping on the skins with temperature controlled fermentation. The wine is aged in big barrels for 3 years and in bottle for at least 6 months. The wine has hints of cherry, raspberry, strawberry and a touch of licorice and a note of vanilla.

Castello Romitorio 2016 Made from 100% Sangiovese. Vine Training is spurred cordon. The grapes are carefully selected by hand on the sorting table both before and after destemming. Fermentation takes place in stainless steel tanks with an initial time of short maceration on the skins of 15 to 20 hours. This is followed by up to 24 days of maceration at a higher controlled temperature. Separation of the skins from the must starts around day 22 once the fermentation has finished. Once the must is obtained natural malolactic fermentation is allowed to occur. The wine ages in oak for about 24 months and then in bottle for about 12 months before release. The wine has hints of cherry, pomegranate with a touch of leather and a note of herbs. 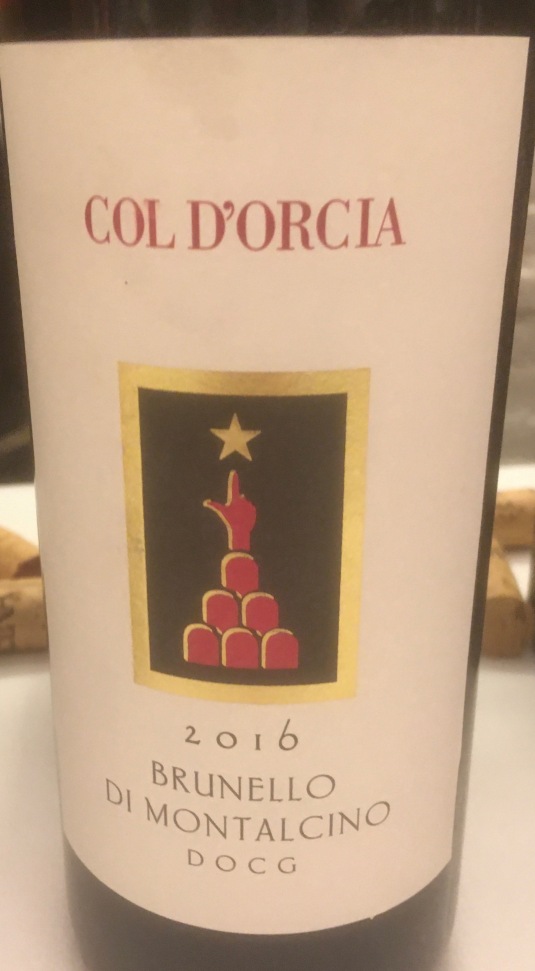 Col D’ Orcia 2016 on the Sant’Angelo hill over looking the Orcia river facing south-south west at 300 meters. Particular clones of Sangiovese are used. Manual harvest with grape selection both in the vineyard and in the cellar. Fermentation is on the skins for about 18 to 20 days at a controlled temperature in 150 HL wide and shallow stainless steel tanks. The wine is aged for 3 years in 25-50 and 75 HL oak casks from Slavonia and Allier and 12 months in bottle before release. The wine has hints of small ripe fruit, and plum jam with toasted and vanilla notes.

Castel Giocondo 2016 (Frescobaldi). Made from 100% Sangiovese. The soil is galestro, clay and Pleocene sands. Manual harvest takes place with a careful selection of the grapes in the cellar. Fermentation is in stainless steel at a controlled temperature with frequent pump-overs, during the early stages. The wine was aged in wood containers. The wine is released after five years, which includes some time in the bottle. The wine has hints of ripe red berries and floral notes with spice and balsamic undertones.

La Gerla 2016 made from Sangiovese-Brunello biotype. The vines are 25 years old and the training system is spurred cordon. There is a manual sorting of the bunches and berries in the cellar. The bunches are destemmed and the is a soft pressing of the grapes. There is prefermentative cryomaceration. Fermentation is at a controlled temperature. Maceration on the skins for about 15 days. Aging is for 24 to 36 months in oak barrels- 50 to 100HL with 2 decanting per year. The wine is in bottle for at least 6 months before release. The wine has hints of red berries, tobacco, leather, and cinnamon and notes of violets and iris.

Le Chiuse 2016 made from 100% Sangiovese Grosso The grapes were hand harvested the last week of September. By gravity, the grapes, which had been destalked and softly crushed, went into thermo controlled steel tanks. Fermentation using natural yeasts and maceration lasted for 22 days. The wine went into steel tanks and then in the spring into 20HL Slavonian oak barrels for 26 months. Then the wine was reassembled into large steel tanks and bottled in March 2020. The wine has hints of small fruits, blueberry, black currant and cherry with notes of spice and violet.

Palazzo 2016 made from 100% Sangiovese grosso. The estate is in the southeast area of Montalcino at 320 meters. The soil is mostly galestro (marl), some small areas are sandstone rocks and clay with skeletal layers. The vines are 36 years old. The grapes are hand harvested the first two weeks of October and sorted in the winery. Vinification is in concrete tanks. Spontaneous fermentation takes place without adding yeast. Maceration lasts for 24 days with delicate pumping over, all taking place under temperature control. Aging is for 40 months in Slavonian oak of 5 to 10HL and another 6 to 8 months in bottle before release. The wine has hints of red berry fruits, walnuts and spice with balsamic and floral notes.

Poggio Antico 2016 made from 100% Sangiovese. The average elevation is 480 meters and the exposure is south/southwest. The soil is rocky and calcareous. Harvest was from September 27 to October 12. Fermentation is for 8 to 10 days followed by 25 days of maceration. The wine is aged for 30 months in 40 HL Slavonian oak casks followed by 18 months in bottle before release. The wine has red fruit aromas and flavors with hints geranium.

These are big wines, and I was very happy to have the opportunity to taste some of them with our meal.  For starters, we had Crostini of sauteed Chicken Livers with Vin Santo, Rice Balls filled with Ragu and Peas and Escarole Pie. 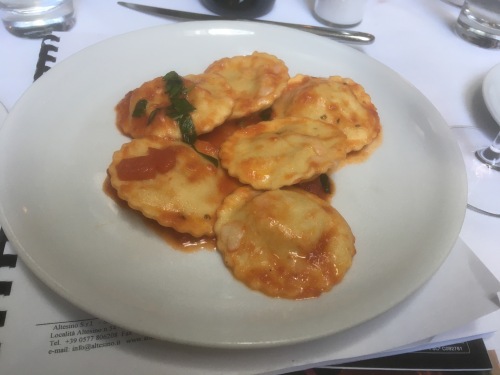 The first course was homemade ravioli with ricotta and eggplant filling and tomato and tomato sauce.

Grilled Rack of Lamb with roasted fingerling potatoes and sauteed spinach was the main course.

One of the wines I drank with lunch was the Rosso di Montalcino Collemattoni 2018. I recommend you drink the Rosso while waiting for the Brunello to be ready. Both the 2016 and the 2015 will need at least 10 before they are ready to drink. 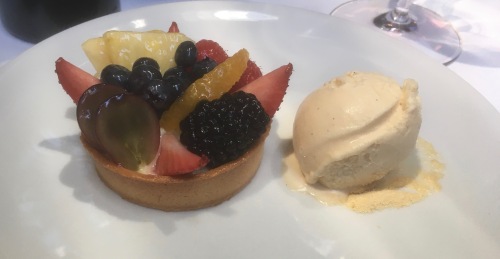 The dessert was a Fruit and Cream-filled Tart with Almond Gelato.