About a year ago, I visited Alessia Antinori at the Fiorano estate just outside of Rome. The estate has been in disrepair since the death of her grandfather, Alberico Boncompagni Ludovisi, prince of Venosa.  For the fascinating background to this story and how Alessia and her two sisters came into possession of half of the estate see      “Fiorano Wine Estate in Italy Making a Comeback” http://www.nytimes.com/2013/10/23/dining/fiorano-wine-estate-in-italy-making-a-comeback.html?_r=2& by Eric Asimov in the New York Times and my article https://charlesscicolone.wordpress.com/2013/09/16/fiorano-a-visit-to-azienda-agricola-boncompagni-ludovisi/ 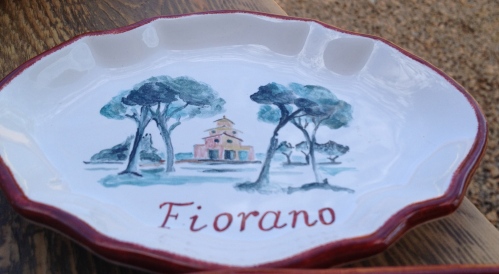 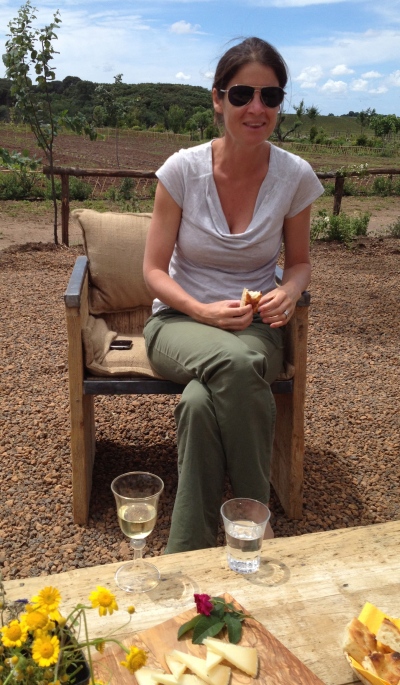 This year, Michele and I were in Rome once again and Alessia invited us to visit the winery and have lunch with her. The winery is across the road from Rome’s Ciampino airport just 20 minutes from the center of Rome by taxi (just 30 Euros — they now have fixed fares to the airports in Rome).  Alessia picked us up at the airport and in a few minutes we were at the winery

Alessia had done a lot of work since my previous visit. All of the buildings had been restored and the winery was up and running. The vineyards were all planted in orderly rows and there was a very large organic vegetable garden which we toured.  Alessia’s grandfather had taken very good care of the land and believed in organic farming. Alessia said she was following in her grandfathers’ footsteps.

We sat down to lunch under the warm May sun; it was difficult to believe that we were so close to Rome.  We discussed her plans for the winery and of course the wine. 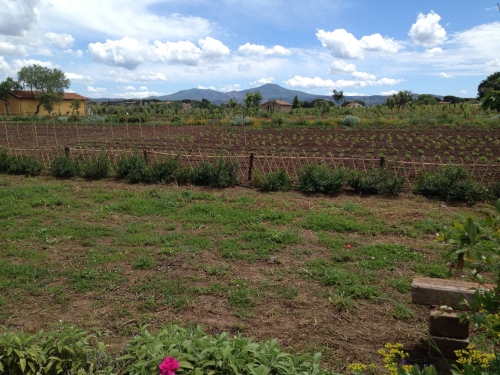 She said that she has turned part of the property into a country retreat for Romans who want to leave Rome during the warmer months. They can come for lunch on Friday, Saturday and Sunday. She calls it Cucina Aperta. The guests can go to the vegetable garden and pick the vegetables that they want to eat and it will be prepared by the kitchen. So far it was all working out very well.

The soil at the estate is very special, Alessia said, volcanic with mineral salts and excellent for growing anything and grazing sheep.  She said that the shepherds liked to bring their sheep there to graze and the sheep would become fatter and darker in color because of what they ate, and the dust from the soil would stick and make them almost black in color.  Her grandfather grew wheat and was very fanatical about it.  He cultivated a “mother” from the natural yeasts in the area in order to make his own bread.

The conversation turned to the wine and Alessia said that she wanted to make wine the way her grandfather did.

This was very good news to me since, as many of you know, Fiorano Rosso made by her grandfather may well be my favorite red wine.  Alessia said that there were 14 hectares planted with vines: Cabernet Sauvignon, Cabernet Franc, Merlot, Semillon and Malvasia del Lazio. They are divided by hectares and the Cabernet Sauvignon, Merlot and Semillon are vines which come from a “massal’ selection (propagation) from the old vines. There are four rows of Cabernet Sauvignon and four rows of Merlot of the “old vines” (Vigna Storica vines more that 40 years old).  As for the historic Semillon, she said that they were supplied to her by “the brother of my grandfather’s assistant who lives on the estate and still has a few rows.”

Among these old vines were some plantings of Cabernet Franc, which Alessia thinks her grandfather used for the Fiorano, but is not 100% sure. The 2010, 2011 and 2012 Fiorano Rosso vintages were vinified at her father (Piero Antinori’s) estate in Umbria.  The 2013 is the first vintage to be vinified here. The 2010 (800 bottles produced) will not be released until 2014 or 2015.

With the excellent lunch we drank Fioranello a lively, fresh red wine made from young vines that went very well with the food. Alessia referred to this as her second label.

Up until now they are using different barrels including tonneaux to vinify and age the wine because they do not have enough wine to fill a large cask or a concrete tank.

This year the Fioranello was vinified in two concrete tanks and aged in two medium sized casks. The Fiorano made from the Vigna Storica was aged this year in tonneaux for reasons of space.  All of this may change in the future.  Alessia, by her passion for her grandfather’s estate  and the wine that he produced made it clear that this was her project and she would be the one involved in all aspects of it. I look forward  to tasting and drinking  Alessia’s first  vintage of Fiorano rosso.

On a June day in Rome last year, the temperature was over 100 degrees as we waited outside the city records hall for Alessia Antinori to pick us up and take us to her winery. Not one of her father, Piero Antinori’s wineries, but to the winery of the late Boncompagni Ludovisi Principe di Venosa, her grandfather.  I was finally going to see where Fiorano, my favorite red wine, was made.

When the Principe died a few years ago, he left half of the estate to his daughter, who is Piero Antinori’s wife and mother of Alessia.  She then gave her share of the estate to her three daughters.  Alessia lives in Rome and since the winery is only twenty minutes away, just across from the Ciampino Airport, Alessia took over the management of the estate.

The other half of the Boncompagni Ludovisi estate was left to a distant cousin of the Principe who has released a 2006 Fiorano Rosso with the original Fiorano label under his own name, Principe Alessandro Jacopo Boncompagni Ludovisi. He also made a white Fiorano, but is using different grapes than the original.  Alessia said that she hoped they could come to some agreement about the label without going to court.

As we were driving to the winery Alessia told us that she was making a number of improvements since her part of the winery was in disrepair. It fact there was not much left and Alessia has undertaken a major restoration.

I asked her about the vines and she said that the people who had worked for her grandfather told her that he ordered them covered with dirt but then a few years later ordered them to be uncovered. In an interview with the late Italian wine writer Luigi Veronelli, Alessias Grandfather said that he would destroy all the vines so that his son-in-law would not get them because Piero did not make wine the way he did. I guess he changed his mind.

Alessia said that her first vintage was going to come from the vines that were uncovered.  Later, when new vineyards are planted, there will be a massal selection of old vines.  She said that the winery was almost ready for its first harvest.  Alessia said that she and her sisters hope to continue the legacy of their grandfather and of the Estate.  This is very good news.

Despite the very hot day, when Alessia offered to open a bottle of the 1988 Fiorano Rosso, I could not refuse the offer. As I sipped the wine I did not think about the heat only of the well-structured, elegant and smooth wine with aromas of cherry and leather, the long finish and the wonderful lingering aftertaste. This is a great wine!

A few months later Alessia was in New York and came to dinner at my apartment along with her husband. She brought with her a bottle of the 1995 Fiorano Bianco and a bottle of a 2010 red, which she had made. She said that this wine will be the second wine of the Tenuta di Fiorano and a label and name had not yet been chosen.

In Rome I had bought a bottle of the 2006 Firoano Rosso made by the new Principe to compare.  It was an easy-drinking wine in a modern style and did not bear any resemblance to the original Fiorano Rosso.  Alessia’s wine was a much bigger, more complex wine with good fruit, but since it was a 2010 it was difficult to judge and needs time to develop.

I also opened a 1994 Fiorano Rosso (made by the grandfather) and it needed at least 10 more years to be ready to drink.   I believe Alessia said that the last vintage made by her grandfather was 1995.

Next time:  the story continues with a visit to the winery in May of 2013 and the improvements Alessia has made.