Our Thanksgiving menu was an unorthodox one this year, but we started as always with Champagne. 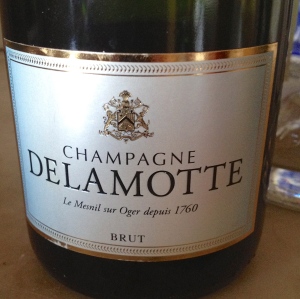 Champagne Delamotte Brut NV made from 50% Pinot Noir, 30% Pinot Nero and 20% Pinot Meunier. The wine is light and fresh with citrus aromas and flavors and good acidity. The sister house is Salon and both are part of the Laurent-Perrier group. At about $38 a bottle, it is a bargain and is our current house champagne.

Blanc de Blancs Brut “Amour de Deutz” Millesime 2002 William Deutz made from 100% Chardonnay from their own Grand Cru villages of Avize and Le Mesnil-sur-Oger in magnum. This is one of the most complex and elegant champagnes that I have ever tasted. It comes in a clear bottle and 2002 was an excellent vintage. With the Champagne we had olives, cheese wafers, and pears wrapped in prosciutto. 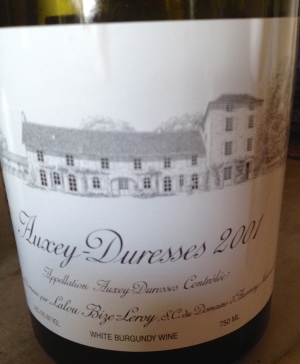 Auxey-Duresses 2001 Lalou Bize-Leroy made from 100% Chardonnay. Biodynamic farming is practiced. A careful selection of hand picked grapes is brought to the cave in small baskets in refrigerated trucks. The grapes are carefully sorted on two large sorting tables (not moving conveyor belts). Only the best grapes are chosen. Fermentation is in large wooden oak barrels without any de-stemming or crushing to avoid any oxidation and to preserve the native yeasts, which are present on the skins of the grapes. Pigeage–crushing down the cap–and remontage–removing the fermented juices from under the cap and bringing it on top of the cap–takes place followed by slow fermentation and a long maceration. After pressing the wine goes down to the first underground cellar. It stays here until the end of malolactic fermentation. After pouring the juice off the lees–soutirage a la sapine--no pumps are used only gravity. The wine then goes down to a second, deeper cellar. It stays there until it is bottled. This wine was showing very well with good citrus aromas and flavors.

We go to restaurant SD26 often and really like their signature dish, Uovo in Raviolo, a large raviolo filled with ricotta and a soft cooked egg yolk, topped with truffle butter. Michele said she would like to do this dish for our guests on Thanksgiving. She made the pasta for the ravioli by hand,

and instead of truffle butter she used Kerrygold butter, a favorite brand. I bought a beautiful fresh white truffle to shave on top.  The warmth of the raviolo and hot butter brought out all the aroma and flavor of the white truffle

Dolcetto D’Alba “Boschi di Berri” 1988 Poderi Marcarini made from 100% Dolcetto from pre-phylloxera vines. The vineyard is over 100 years old and because the soil is sandy and the particular microclimate of the vineyard, the vines are phylloxera free. They are not spliced onto American rootstock but are native vines. The vineyard is 0.5 hectares; there are 4,400 vines per hectare. The training system is free-standing espalier with guyot pruning and the exposure is west. The vineyard was planted in the late 1800’s. This was an exceptional wine, showing no sign of age. It had hints of cherries, raspberries, currants and a touch of leather. It was unlike any Dolcetto that I have tasted before. If this was the traditional Dolcetto from the last century, we are missing a lot today!

The main course was a bone-in pork rib roast with cranberry fig mostarda, a recipe from Michele’s latest book, The Italian Vegetable Cookbook. With that we had roasted potatoes and Brussels sprouts baked with butter and Parmigiano Reggiano.

Produttori has 100 hectares of Nebbiolo in the Barbaresco Appellation, 1/6 of the area. Each grower makes his own decisions as far as growing the grapes is concerned. Produttori del Barbaresco only produces wine from the Nebbiolo grape — Barbaresco DOCG, a blend of grapes from different vineyards, and Langhe Nebbiolo DOC.

In great vintages, nine single vineyard Barbarescos are produced within the boundaries of the village of Barbaresco: Asilli, Rabaja, Pora, Montestefano, Orvello, Pagé, Montefico, Moccagatta and Rio Sordo.  The co-op takes great pride in these wines and the name of the single vineyard, the total number of bottles produced, and the name of the owners of the vineyard are on the label.

The Orvello vineyard covers an area of 16.25 acres at 290 meters with a south/southeastern exposure. The 1979 was aged in large barrels of Slavonic oak for four years. This is traditional classic Barbaresco at its best. I have been drinking these wines for over 35 years.

Barolo Riserva 1971 Giacomo Borgogno and Figli 100% Nebbiolo. The grapes come from three different cru vineyards: Cannubi, Liste and Fossati. The winery is located in the center of the town of Barolo. The wine is aged at least five years in large oak barrels. This is a wine produced with traditional and natural wine making methods. Long fermentation and pumping over by hand takes place. Today the Farinetti family that also owns Eataly owns the winery. I have always had very good luck with older vintages of Borgogno. This is a classic traditional Barolo.

We finished the red wine with the cheese course.

Fiano Passito “Privilegio 2011 Irpinia DOC Feudi di San Gregorio made from Fiano and Falangina grapes, harvested by hand, late harvest with a touch of Botrytis (noble rot) in mid October. The vines are 15 to 20 years old, there are 4,000 to 4,500 vines per hectare and the vineyards are at 1,000 to 1,500 ft. The grapes are then dried on straw mats for several months. After a soft pressing, the clarified must is fermented in new French Troncais oak barrels. The wine has hints of honey, figs, apricot and pear and was a perfect combination with the pumpkin pie and apple crisp we had for desert.

After the cafè we toasted the holiday and our guests with Romano Levi Grappa.