Jamai Rayyis is a wine journalist who has been with Sud de France, an organization representing the products of that region, for more than 10 years. At a recent presentation, he gave a very informative two-hour talk on the wine areas of the Sud–Ouest (the South West) and the Roussillon-Languedoc of France.

However, all the wines tasted in the master class were from the Roussillon-Languedoc area. At the tasting, there were also wines from the Sud-Ouest but I was unable to stay to taste them.

Languedoc-Roussillon is a historical coastal region in southern France extending from Provence to the Pyrenees Mountains and the border with Spain. It is the southernmost region of mainland France. It is now part of the Occitaine (the southernmost administrative region of France excluding Corsica created on Jan. 1 2016 from the former region of Languedoc-Roussillon and Mid-Pyrenees). The area is a major producer of Vin de Pays d’Oc. It is the single largest wine producing region in the world. There are many different soil types raging from rocky soil to thick clay. There is a wide variety of grapes grown here.

The Wines: I was very impressed with the older wines and how well they aged. 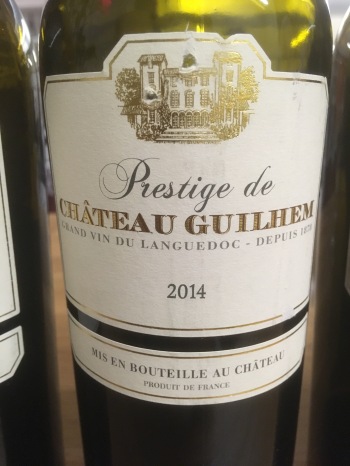 Chateau Guilhem Prestige 2015 & 2014 AOP Malpère made from 50% Merlot, 20% Cabernet Franc, 20% Cabernet Sauvignon and 10% Malbec. (Organic) After the harvest there is a hand selection of grapes on a vibrating table, with manual debudding and leaf thinning. The grapes are pressed and fermentation takes place at a cold temperature to preserve the aromas of each grape. Maceration takes place in concrete tanks. These are wines with hints of red fruit, cherry and a touch of blackberry and spice and good acidity. I liked both vintages.

Jamal said the wines of the Malpère distinguish themselves from the other wines of the Languedoc with varieties such as Merlot, Cabernet Franc and Cabernet Sauvignon, which are to be found traditionally near the Atlantic Ocean. Brought to the region in the 1970’s, they grow very well in this particular terroir. Chateau Guilhem thrives on this land with its sandstone hills and benefits from its south-southeast exposure.

Chateau Guilhem Prestige 2005 VDQS Jamal said he could not find any information on the wine. This wine is not showing any sign of age. It is drinking very nicely with hints of red fruit, raspberries, strawberries and a hint of blueberries, a very pleasing aftertaste and long finish. If the 2015 and 2014, develop like this they are great buys. 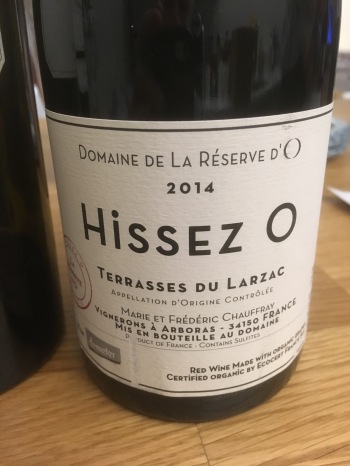 Domaine de la Réserve d’O Hissez O 2014 AOP Terrasses du Larzac made from 50% Syrah, 35% Grenach Noir and 5% Cinsault. The soil is clay and limestone at 400 meters. The farming is certified both Ecocert Organic and Demeter Biodynamic. The wine is vinified entirely in a mix of cement and stainless steel and is fermented spontaneously. It is unfiltered, unfined with low sulphite-35mg/L. This is a full-bodied red wine with hints of raspberry, currants, pepper and floral notes. I was really impressed by this wine.

Chateau Paul Mad Clos du Moulina AOP Peézenas 2012 made from 55% Syrah, and 45% Grenache Noir. The wine had hints of red fruit and a touch of coconut. This is a very big producer.

Domaine de L’Edre Carrement 2010 AOP Cotes du Roussillon made from 50% Syrah, 25% Grenache,15% Carignan Noir and 10% Mourvèdre. Sustainable viticulture. The grapes are traditionally hand picked into small crates. Total destemming then fermentation in temperature controlled stainless steel tanks with indigenous yeast. There is a cold pre-fermentation maceration and malolactic fermentation takes place. The wine is aged in temperature controlled stainless steel tanks. This is an elegant well-balanced wine with hints of black fruit, notes of licorice and showing no signs of age.

Château de Fabre Gasparets 2005 AOP Cabieres Boutenac made from 50% Carignan Noir, 30% Mourvedre and 20% Syrah. The soil is pebbles quartz and limestone and the harvest is manual. Aged in French oak barrels for 12 months. The winery is organic certified. This is a full-bodied meaty wine with hints of black fruits and sweet spices and a note of cherry on the palate. It is showing no signs of age and drinking very nicely.

Domaine Fontanel Rancio sec 2007 IGP Cotes Catalanes made from 100% Grenache Blanc. The winery extends over 30 hectares in Tautaver, the most southern eastern part of France between the Mediterranean Sea and the Pyrenees foothills. The soil is marl. Traditional vinification. The wine is aged in barrels according to the soleras system (the wine goes from cask to cask during its blending). The alcohol is 17%. The wine has hints of nuts and flintstone with a notable aftertaste and long finish.

Domaine du Mas Blanc “Collection” 1975 AOP Banyuls is an area near the Spanish border where the Pyrenees reach the Mediterranean Sea. Made from 100% Grenache Noir from their oldest vines. The grapes are hand harvested and trodden by foot. It was fermented in cement tanks with native yeasts and aged in 650 liter oak half-muids for 10 years. The wine is aged for a minimum of five years before bottling with or without temperature control and occasionally out of doors. It can be aged in old barrels, demi-muids (600 liter oak barrles) and foudres ( large wooden vat between 20 &120 hl), as well as glass demijohns. This is an oxidized fortified wine and it as fantastic!

Tasting and Enjoying the Naturally Sweet Wines of Roussillon

It is not often that I get a chance to taste and talk with someone like Eric Aracil from Vins du Roussillon.  We tasted a number of wines together and I understood quickly that Eric is very knowledgeable and passionate about everything concerning the Roussillon region of France.  He was so enthusiastic when he spoke about the wine, the food, the terroir and the Roussillon area in general that I wanted to go there. Since there were only the two of us, I could ask as many questions as I liked. The five wines that we tasted were all naturally sweet and the wineries all all family owned. Eric said that these wines could go with many different food because of their natural sweetness.

Eric said that the Banyuls area is located directly on the Mediterranean Sea, very close to the Spanish border. The sunny vineyards are on steep slopes and are planted on narrow terraces. Because of this the grapes are hand-harvested. These wines are made the same way as port.

The soil in the growing area is brown schist. The fruit is separated and traditional fermentation takes place and there is mutage (addition of grape spirits) on the must before pressing. During the fermentation, wine alcohol is added so that the fermentation stops. The residual sugar in the grape determines the sweetness of the wine. Then the wine is aged partly in new oak casks, partly in half-empty casks kept out-of-doors, and partly in large wooden foundres for seven years where oxidation takes place. Then refinement takes place in a climatized cellar until release. The wine is 16% alcohol and it is placed in 500ml bottles. This combination of different ripening methods makes Banyuls a totally unique wine that can be used both as an aperitif and a dessert wine. This is a rich warm wine with hints of prunes and raisins. 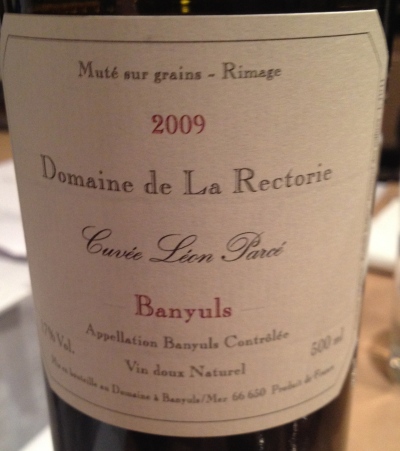 Banyuls Domaine  de La Rectorie Cuvée Leone Parcé 2009.  Made from 70% Grenache Noir, 20% Grenache Gris and 10% Carignon.  The soil is Cambrian gray schist and the average age of the vines is over 50 years old. The grapes are hand picked a little later in the season which, Eric said, gives the wine more complexity and flavor. The grapes are then pressed and destemmed.  After macerating whole bunches of grapes for a few days, fermentation is stopped by adding 7-10 % of neutral alcohol (96% abv) to the must. Alcoholic fermentation at controlled temperatures and mutage on the cap of the marc followed by three weeks maceration. Alcohol extracts the flavors of the grapes. The wine is aged in large oak casks for 18 months in an underground cellar before being bottled.

This is a concentrated full-bodied wine with nice dark cherry aromas and flavors and a hint of pepper. Eric added that Banyuls goes vey well with chocolate. 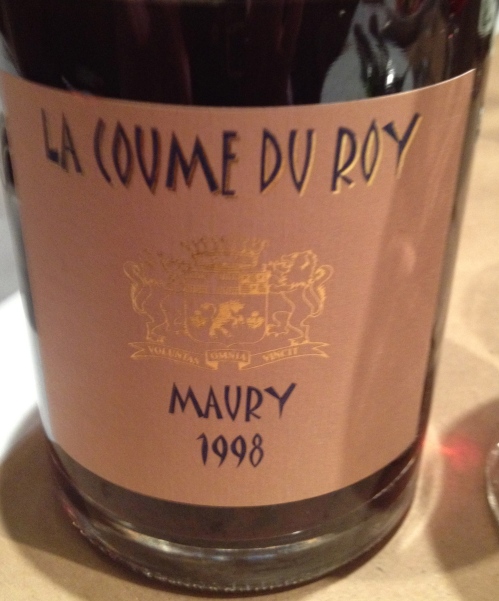 Maury 1998 Domaine De La Coume Du Roy 100% Grenache. The field of Coume Du Roy is located in town of Maury in the heart of the Agly Valley on black slate between the Pyrenees and the Corbiéres. The domaine is one of the oldest in the area and has wine for sale going back to 1925.

The vineyards are facing south/south-east and the soil is aptian black metamorphic schist. The grapes are hand picked, destemmed and crushed. Alcoholic fermentation is stopped by mutage on the cap followed by a long maceration. The wine is aged in full vats and then bottled. This is a naturally sweet red wine.

I was very impressed by this wine. It had aromas and flavors of dark berries with hints of cassis, blackberries and black cherry and a slight mineral character.

Maury Blanc 2008 Domaine La Preceptorie made from Grenache Gris, Grenache Blanc and Macabeu. The soil is black schist and direct pressing by hand follows the harvest. Alcoholic fermentation and the mutage takes place on the must in 400 liter casks. The wine is then aged in 400-liter casks for 12 months. This is a well-balanced wine with exotic fruit aromas and flavors and a hint of apricot and pear. 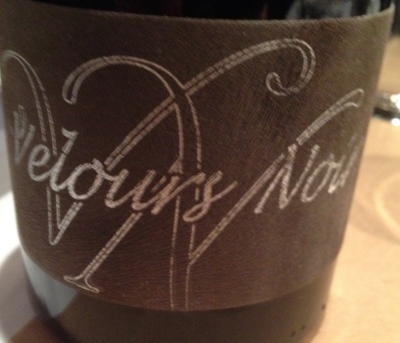 IGP Cotes Catalanes Chateau De L’OU “Velours Noir” (Black Velvet) 2010 made from 100% Syrah. The soil is black schist in the Maury Terroir 385 meters above sea level. Eric said that the wine maker is a woman. Prefermentary maceration at low temperatures then alcoholic and malolactic fermentation in new 300 liter oak casks with completely de-stemmed grapes. Eric said that the maturation is in the same open barrels that were used for the 9-month fermentation and added that it is unusual to have Syrah from this area.  As the name implies, this wine did have a velvety quality to it, with nice dark fruit flavors and aromas and a hint of licorice.