Marsha Palanci, President of Cornerstone Communications, Ltd was involved with a project for the Tuscan winery Tenuta di Trinoro. She invited Tom Maresca and Diane Darrow, Mary Ewing Mulligan, MW and Ed McCarthy, and Michele and I to taste three wines from the estate and to give our views on the wines. Sarah Bray was there representing the winery. As we tasted the wines, a lively discussion took place about the wines and how they would be marketed.

Tenuta di Trinoro was founded in 1990 by winemaker and owner Andrea Franchetti. The estate in located in Tuscany’s Orcia Valley, 37 miles southeast of Siena. Franchetti is very interested in Cabernet Franc and planted cuttings from a Pomerol vineyard in Bordeaux. After years of experimentation, in 1997 he released the first vintage of a Cabernet Franc based Bordeaux blend.

In the spring of 2016 Franchetti announced the US release of three single vineyard 100% Cabernet Franc wines. Each wine is labeled with its vineyard name: Campo di Tenaglia, Campo di Camagi and Campo di Magnacosta.

The individual crus, known as campi in the local dialect, are located at different locations and elevations on the estate. Each is planted with vines that are over 20 years old and the largest is less than 4 acres. There is a strict selection and low yield. Franchetti sprays his vines with mixture of clay, propolsi and grapefruit seed extract.

The 2014 vintage marks the first launch of all three wines together. 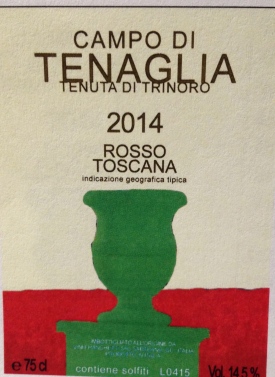 Campo di Tenaglia 2014 IGT. This is a 0.8 hectare parcel on deep terrain made of crumbled limestone. It sits on a slope facing west at 550 meters. There are 10,000 vines per hectare. Fermentation is in steel vats for 12 days. The wine is aged in new French oak barrels for 8 months and 11 months in cement tanks. The wine was bottled during the waning moon in March 2016. This is an elegant wine with hints of cherry, spice and a touch of licorice. This was the most approachable of the 3 wines. $120 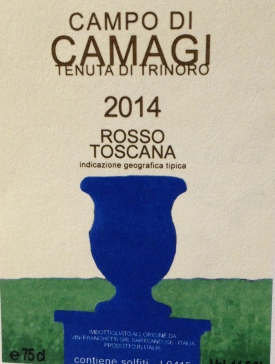 Campo di Camagi 2014 IGT. This is a 1.5 hectare vineyard of limestone and broken quartz with a thin layer of soil. The vines struggled to survive in this densely planted vineyard but it has all worked out. The vines are 23 years old and are at 450 meters. This is a concentrated wine with hints of blackberries, blueberries and cherries with a touch of vanilla. Production is 1,500 bottles. $120 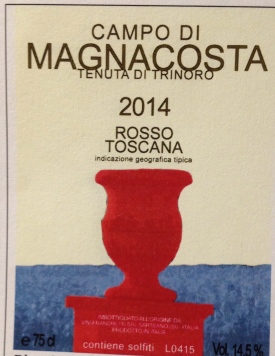 Campo Magnacosta 2014 IGT. A 1.5 hectare gravel parcel on the valley’s bottom where an old stream vanished under the surface. The water once eroded the side of a hill, hence the name magna eat and costa hillside. The vines are 23 years old. This wine seemed to be the most complex and powerful of the 3 wines and the one that would need the most time before it is ready to drink. It has hints of black and red berries with a touch of prune, spice and leather. This is the fourth vintage of this wine Production 1,500 bottles $120.

These wines show the importance of terroir in a wine. The 3 wines are all made from the same grape variety, same plant density, and are vinified the same way, yet all have very different characteristics.

Later, I was sent a bottle of Le Cupole, also from Tenuta di Trinoro. This is a wine I already knew and liked. We carried it when I was at iTrulli. 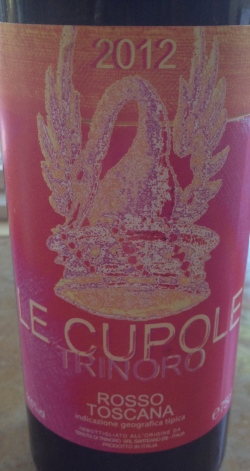 Le Cupole Rosso Toscana 2012 IGT made from 55% Cabernet Franc, 27% Merlot, 17% Cabernet Sauvignon and 1% Petit Verdot. The blend changes according to the vintage. There are 10,000 vines per hectare, and they are 22 years old. There is no fertilization. The vineyards are at 400/600meters and the harvest started on September 28th. There are 40 different pickings and vinifications, total destemming with automatic selection of single berries by density in sugar solution. Alcoholic fermentation takes place in 40HL stainless steel tanks for 15 days. The wine remains on the lees for 3 days before taking the wine off the skins. 1/3 of the wine is in contact with the skins before racking and 2/3 in 2nd, 3rd and 4th passage French oak barriques and then 10 months in cement. The wine was bottled in March of 2014. This is like a Bordeaux blend but with  Production 55,000 bottles $25