In his seminal book, Italy’s Noble Red Wines, Sheldon Wasserman wrote, “If there is a single finest vineyard in Barolo, and there is a consensus that there is, that vineyard is Cannubi.”  I was interested in attending the grand tasting and seminar held by Vinitaly USA 2014 because there has been a lot of controversy about the Cannubi vineyard and I wanted to be better informed about the wines. 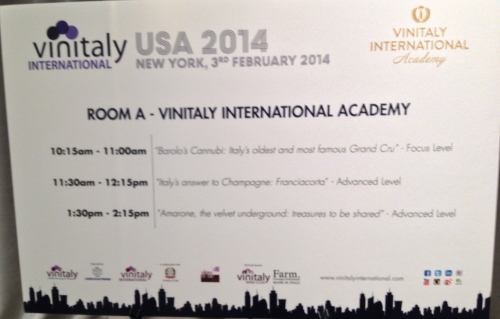 The seminar was entitled “Barolo Cannubi: Italy’s oldest and most famous Grand Cru”, and the speaker was Ian D’Agata, Scientific Director, Vinitaly International Academes.  I had met Ian a number of times and always found him to be very knowledgeable and informative.

Ian spoke about the Nebbiolo grape. In the distant past the Nebbiolo grape was more famous than the wine Barolo.  He said that Nebbiolo comes from the Italian word nebbia (fog).  Lampia and Michet are sub-varietals of Nebbiolo but the Rose, which is commonly considered a sub-varietal, is a different variety related to both Nebbiolo and to Freisia. 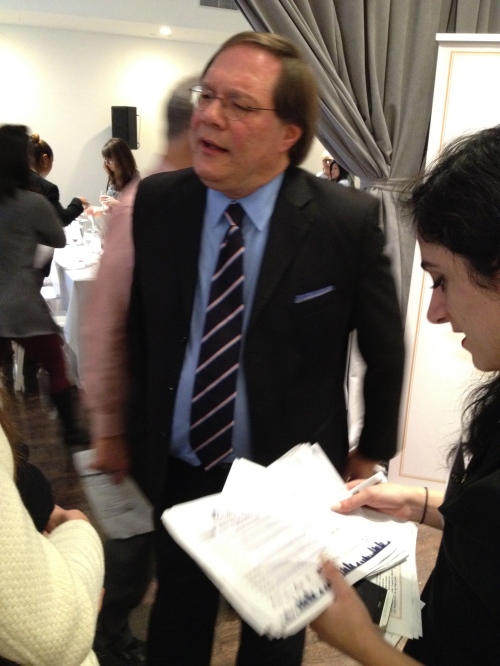 The Cannubi vineyard also known as Cannubi centrale extends from the village of Barolo and has been planted with Nebbiolo grapes on its south and east exposure for more than 100 years.  The 15-hectare Cannubi centrale runs approximately southwest northwest and is entirely in the commune of Barolo.

There are four other areas that border on Cannubi: Cannubi Muscatel, Cannubi San Lorenzo, Cannubi Boschis and Cannubi Vallitta. These four have been a matter of controversy and court cases over the last years.

What makes it so confusing is that there have been a number of different rulings each contradicting the other.

One decision was to just call the whole area Cannubi which would double it in size. But I believe that was defeated.  Then there was a proposal that would require a producer in Cannubi, San Lorenzo for example, to put Cannubi San Lorenzo on the label and not just Cannubi. That was passed but then it was challenged and defeated. The latest proposal is that a producer with vineyards in Cannubi San Lorenzo can either put this on the label or just put Cannubi. There are producers in Cannubi centrale that do not like this ruling.

Ian seems to favor having the particular vineyard name, ie, San Lorenzo, on the label. For more on this subject see Alfonso Cevola http://acevola.blogspot.com/2012/06/to-cannubi-or-not-to-cannubi.html and Jeremy Parzen http://dobianchi.com/?s=Cannubi.

There were 7 wines tasted

Michele Chiarlo Cannubi – while it is often said that this producer leans toward the modern style, I really did not see it in this wine.

Damilano Cannubi — It is a little more modern in style, more approachable and in my opinion will be ready to drink before the other wines.

Poalo Scavino Cannubi — One of the first producers to go to the modern style but it seems that he is becoming more traditional.

Cannubi San Lorenzo from Ceretto did not make it to the tasting.

There were no examples from the Cannubi Vallitta presented at the tasting.

Cascina Bruciata – Cannubi Muscatel  In the southern most position, just north of the town of Barolo itself, this vineyard is at 300 meters with a southwest exposure. Ian said that in the past Barbera was planted here. I have also been told that before phylloxera the vineyard was planted with Muscat or Nebbiolo grafted on to Muscat vines, hence its name.

Virna Cannubi Boschis— This is a specific sub section of the Cannubi hill. Ian pointed out that its origin name was Monghisilfo and it might have been renamed for the family which controlled the area. The late Renato Ratti, who was one of the first to draw attention to the crus, wrote that there were similarities between Canubbi Boschi and Cannubi proper but set them apart. Cannubi Boschi has a particular good south and southeast exposure. It is in the north most portion of the district. The soil is sea deposits of calcareous clay and there is very good drainage.

I believe that it would be better to put the name of the vineyard on the label, for example Cannubi Muscatel, to inform the buyer about the source of the wine.  What is the use of a cru if the label says one place but the vineyard is actually someplace else!