My friend Tom Maresca, a wine writer, wanted to do a tasting at La Pizza Fresca in NYC of Sangiovese, Nebbiolo and Aglianico from the Caparone winery in California. I did not know the winery and was very skeptical because I have never tasted an Italian varietal from California that I really liked.

I looked the winery up and saw a quote by David Caparone in “Italy’s Noble Red Wines” by Sheldon and Pauline Wasserman. This book was for me the bible of Italian red wine for many years and I have very fond memories of evenings with the Wassermans. They wrote, “Italy has three indigenous varieties capable of producing wines of breed and character. These noble varieties are Nebbiolo, Sangiovese and Aglianico.”

These would be the three Italian varieties that Dave and his son Marc Caparone, the winemakers, use to produce wine. They produce the wines by themselves and do not have any employees.

I contacted the winery and Marc Caparone  said the Nebbiolo is from clone CVT 30, the Sangiovese clone comes from Il Poggione, and the Aglianico is the original clone at UC Davis that his father found there in 1988.

All this sounded very interesting and since Tom liked the wines, I knew I would enjoy tasting them.

There were 6 of us at the tasting, Tom, Diane Darrow,  his frequent co-author, Ed McCarthy and Mary Ewing-Mulligan, MW, authors of the “Wine for Dummies” books, and Michele Scicolone, author of The Italian Vegetable Cook Book, The Italian Slow Cooker, 1000 Italian Recipes.

The Caparone winery in Paso Robles California was founded in 1979 by Dave Caparone. It is located northeast of Paso Robles, California. They pride themselves on being the oldest small, artisan winery in the region and making wines with good varietal character, intensity and longevity. They make wines that complement food.

The winemakers do not blend wines and want to make wines that will last for decades. They look for balanced grape maturity. Balanced maturity occurs at moderate grape sugar levels, which means moderate alcohol levels. All of the wines tasted were below 13.5% alcohol.

In order to achieve balance and complexity, each wine is in contact with the grape skins for four to six weeks before pressing. This softens the tannins and adds to the overall balance of the wine. Each of the wines receives two full years in 100% neutral French oak barriques (59 gallons) and are not fined or filtered. The wine remains in bottle for one year before release.

Sangiovese 2014 Paso Robles macerated on the skins at fermentation for 30 days. This is a wine with nice red fruit. It did have the characteristics of an Italian Sangiovese, however, if I was given this wine blind I would have said it was a Chianti Classico Riserva with a bit too much oak and concentration or a “Super Tuscan”.

Sangiovese 1996 the wine was showing no signs of age 18 years later. It had become mellow; the red fruit was still there with a touch of violet. After drinking this I realized that the problem I had with the 2014 was that it was too young. 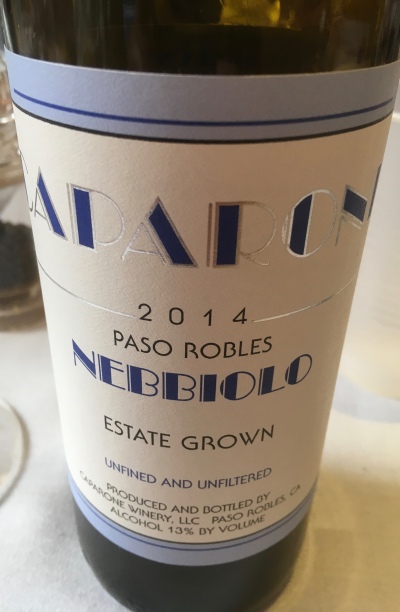 Nebbiolo 2014 Paso Robles Nebbiolo macerated on the skins for 45 days, in completely enclosed stainless fermenters. This was my favorite wine of the tasting. It was light in color like Nebbiolo should be. In a blind tasting I might have said it was like a Nebbiolo from the north of Piedmont but in a much lighter style with more red fruit and less of the tar, tobacco and dried fruit character. 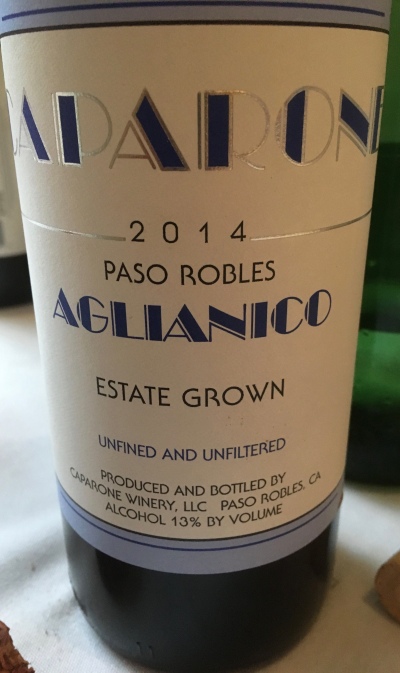 Aglianico 2014 macerated on the skins at fermentation for 30 days. The wine was dark in color and drinking very well right now. It did have the characteristics of an Aglianico Taburno with hints of black cherry, blackberries and plum. 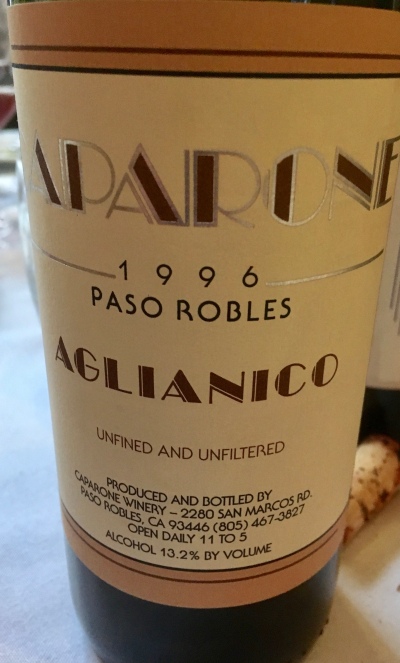 Aglianico 1996 this wine was not showing any signs of age and had developed into a very drinkable mature Aglianico. This wine reminded me of an Aglianico del Vulture. It still had the black fruit flavors and aromas but had developed hints of tobacco and cedar.

At the Caparone winery, they believe the finest wines are created by nature and are a reflection of the vine and the place where it grows, not of the gadgets and chemicals used so often in modern wine making. They take great pains to interfere as little as possible in the wine making process. Their techniques are mostly a collection of traditional wine making practices more like Europe than California. They do not what excessive oak in their wines.

There were difference opinions and discussions  about the wines which just made it more interesting and enjoyable. 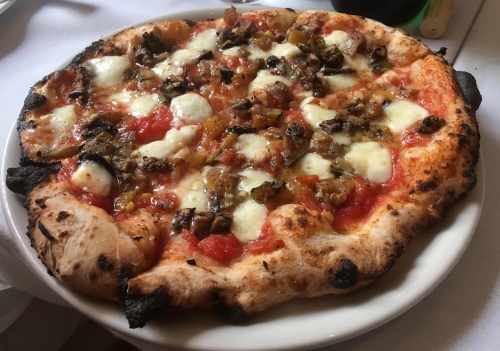 The wines went very well with the food and pizza at La Pizza Fresca.