A Taste of Italy with Doctor Wine

Daniele Cernilli, aka Doctor Wine, hosted “A Taste of Italy” session on Zoom.

Nine wines from different regions of Italy arrived so that participants could taste and discuss. The samples were sent in very small bottles with twist off caps. 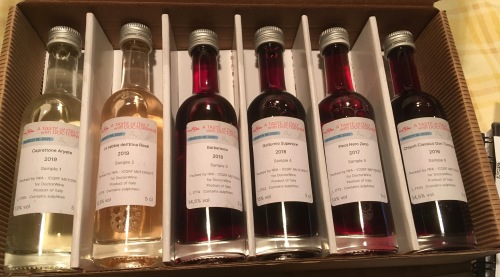 I guess this method was chosen since it was easier and less expensive to ship. The name of the wine and a number was on each bottle so there would not be any confusion.

There will be two blogs focussed on these 9 wines. The first blog will concern the 4 wines from wineries I have visited or have hosted tastings for. The next 5 will follow in another blog.

Caprettone “Ayete” 2019 Vesuvio Caprettone DOC Casa Setaro (Campania) made from 100% Caprettone. The production zone is at 250/300 meters in the Trione della Guardio in Vesuvius National Park.

Massimo Setaro, owner of the winery, was one of the speakers. I met Massimo in Rome where I tasted his wines and also visited the winery. He spoke about the soil and said it is volcanic and sandy with a layer of lava on the surface and volcanic stone. Because of this there is a mineral character present in the wines. This composition of the soil makes the vines immune to phylloxera so the vines are not grafted onto American rootstock. If phylloxera  attacked a plant it would destroy it but would die in the soil before it reached another plant. The training system is guyot. Vinification: Maceration in steel tanks at a controlled temperature and fermentation lasts for about 20 days in amphora and tonneaux. The wine remains in steel tanks for about 6 months and then in bottle for two months before release. The wine has hints of citrus fruit, herbs, and cedar with balsamic notes, nice minerality, soft acidity and a long finish.

Le Sabble dell’Etna Rosè DOC 2019 Firriato (Sicilia) made from Nerello Mascalese from territory of Castiglione (Catania, Sicily). Cavanera Etnea Estates. Grapes are from different vineyards on the North side of Mt. Etna. The soil is loamy-sandy of volcanic origin with good drainage. Exposure is northeast and the vineyard is at 720 meters. The training system is Cordon Royat. There are 4,000 to 4,500 plants per hectare. The grapes are hand harvested the first week of October. Fermentation is for 15 days. Soft pressing for about 2 hours, slight skin maceration and static sedimentation. The wine spends 3 months on the fine lees in stainless steel tanks with daily shaking. After 3 months in bottle the wine is released. This is a fruity wine with hints of strawberry, raspberry, and a hint of citrus fruit. I visited the winery a number of years ago and more recently hosted a lunch and tasting of the wine at Norma Restaurant in NYC.

Chianti Classico DOCG Gran Selezione “Don Tommaso” 2016 80% Sangiovese and 20% Merlot Principe Corsini, Villa Le Corte (Toscana). The winery is located in San Casciano Val di Pesa. The vineyards are at 270-350 meters and have a southern exposure. The Pilocenic hills are rich in river stones. There are 5,800 plants per hectare. The training system is low-spurred cordon and the average age of vines is 25 years. This is a selection of the best grapes. They are hand harvested, destemmed and put in pen frustum, cone–shaped stainless steel tanks at a controlled temperature. After 24 hours at 20°C the grapes are inoculated with selected indigenous yeasts. Fermentation for the Sangiovese is 18 days and for the Merlot is 16 days at a max temp of 28°C. The wine is aged in 70% in new barriques and 30% in used barriques for 18 months and 12 months in bottle before release. The wine has hints of blueberries, cherries and lavender with a touch pepper and a note of wild fennel. Daniele said 2016 was the best vintage in Chianti in over 10 years. I did not visit this winery but hosted a dinner for them a few years ago in New York City and really liked their Chianti Classico. 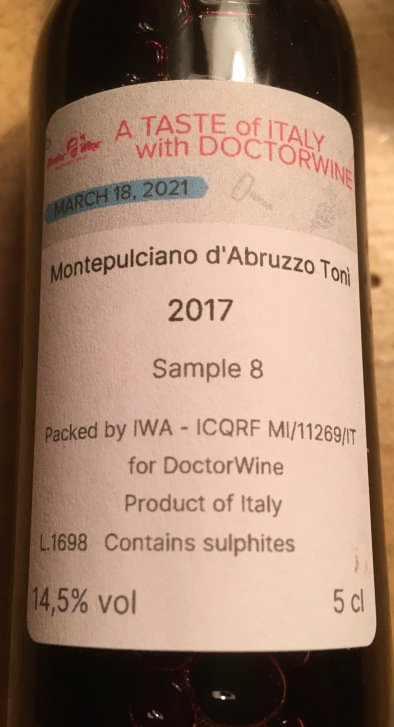 Montepulciano d’’Abruzzo “Toni” 2017 Cataldi Madonna (Abruzzo) Made from 100% Montepulciano D’Abruzzo from the Cona vineyard near Ofena. The soil is clay loam rich in calcareous skeleton. Elevation is 1,250 feet with a Northwest exposure. Vines were planted in 1990 and the training system is spalliera. Fermentation takes place in stainless steel and the juice remains in contact with the skins for 20 to 25 days with regular delestage and pumping over. The wine is aged in French oak barrels for 12 months and in bottle for 18 months before release. This is wine with body and hints of dark fruit, black cherries, prune and a touch of smoke. It has a long finish and pleasing aftertaste. Daniele really liked this wine and said it was real Italian wine.

I visited the winery twice the last time in 2019 and always enjoyed their wines. Giulia Cataldi Madonna now runs the winery. She is the fourth generation of here family. She was present on Zoom.

Return to the Cataldi Madonna Winery

Michele and I first visited the Cataldi Madonna Winery in Abruzzo about 15 years ago. I recall that it was the first time I had tasted wine made from the Pecorino grape. There was some confusion and a lot of discussion over how the Cerasuolo D’ Abruzzo, a Rosato that looked like a red wine, was produced. We looked forward to our return visit and seeing Luigi Cataldi Madonna again.

The winery, which is about 65 acres, is located in the town of Ofena. There are 30.5 hectares of vines planted exclusively with local and traditional vines like Montepulcino, Pecprino and Trebbiano at 320 to 440 meters. The plain of Ofena is at the foothills of the only Appenine glacier on Calderone in the Gran Sasso Mountain range. This makes for a great difference between night and day temperatures. The area has been called the oven of Abruzzo. 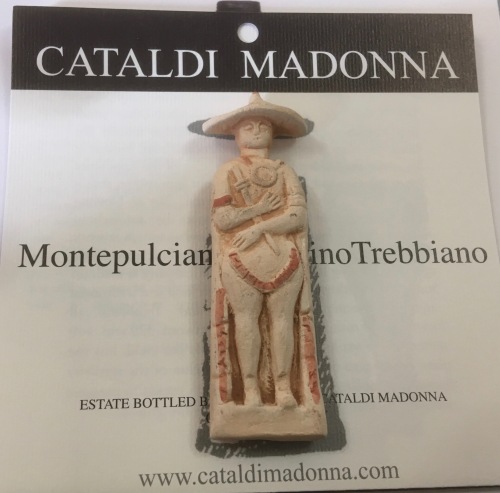 Our host then and now was the owner of the winery Luigi Cataldi Madonna. This time his daughter Giulia assisted him. Giulia said the picture on the labels is of the statue of the Warrior of Capestrano, a symbol of ancient Abruzzo. 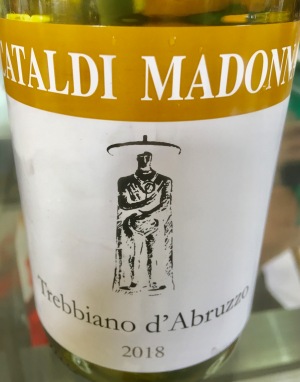 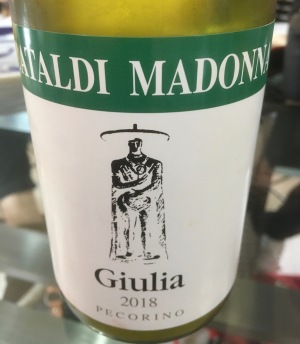 Pecorino “Giulia” Terre Aquilane IGT 100% Pecorino from vineyards in Cona, Fontone and Macerone at 380 meters. The vines were planted in 2001 and the training system is spallier. Vinifiction takes place in stainless steel tanks for 30 days at a controlled temperature. At the end of fermentation the juice is in contact with lees and is aged in stainless steel tanks for 3 months. The wine has hints of grapefruit, lime and a touch of fresh herbs.

Luigi was one of the first to “rediscover“ the Pecorino grape and began replanting in 1990 and produced the first vintage in 1996. Pecorino means little sheep in Italian because the sheep liked to eat these grapes off the vine. 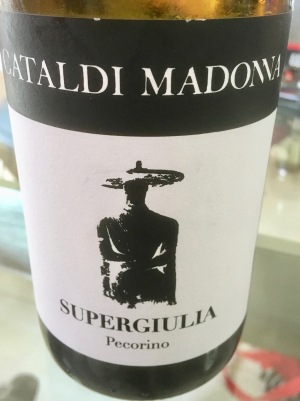 Pecorino “Super Giulia” 100% Pecorino. The difference between the two is Super Giulia is made from the best selection of the grapes. This is a more flavorful version than the regular Giulia with a note of passion fruit.

Both wines are named for Luigi Cataldi Madonna’s daughter, Giulia. 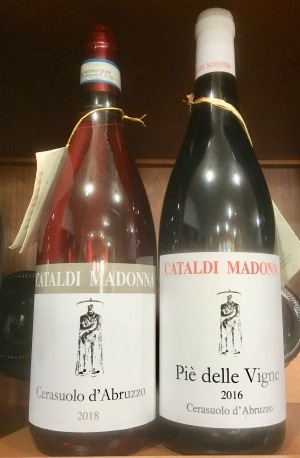 Cerasuolo d’ Abuzzo Rosato made from 100% Monepulciano D’Abruzzo from vines planted in 1970 and the vineyard is at 1,250ft. The training system is pergola. Fermentation is in stainless steel tanks for 30 days at a controlled temperature and is aged for 3 months in stainless steel. The wine has a bright rose color. This is a fruity wine with hints cherry, strawberry and a touch of almond.

Cerasuolo d’Abruzzo “Pie delle Vigna” Rosato this is the wine that caused all the confusion because it is a Rose but looks like a red wine. We did not get to taste this wine on this visit because it was all sold out. I saw it in a store on one of our stops. This wine is made by white wine vinification 85%. The problem is that the juice from the Montepulciano grape is pink. The other 15% from red vinification, the juice is in contact with the skins for about 8 hours, so the wine looks like a red wine! 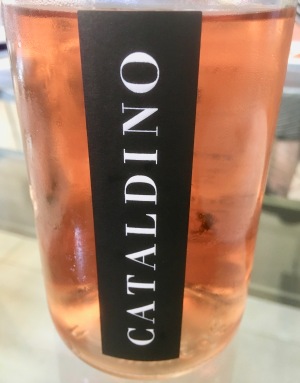 They also now make another Rosato from Montepulciano grapes called “Cataldino” which is an IGT wine and is a very fruity easy drinking wine. 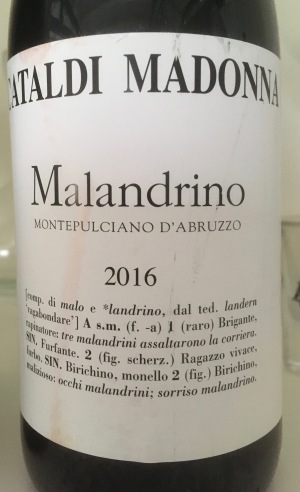 Montepulciano d’Abruzzo “Malandrino” made from 100% Montepulciano d”Abruzzo the vineyards are at 1,375 ft and the vines were planted 1970-2004. The soil is clay and limestone with medium texture and rich in skeleton. Vinification takes place in stainless steel tanks. The wine is aged in stainless tanks and concrete vats for 12 months. The wine is in bottle for 3 months before release. The wine has hints of blueberry and plum with a touch of violets.

We enjoyed visiting the winery once again and meeting the third generation of wine producers at Cataldi Madonna.