Tasting Wine on the Crystal Serenity

Ever since I studied Byzantine history many years ago, I have wanted to visit Istanbul, or Constantinople, as I like to think of it.  So when the opportunity arose for Michele and I to teach wine and food classes aboard the Crystal Serenity Epicurean Discoveries Cruise, I finally had the chance.  We boarded the ship in Athens and during the next two weeks we visited Santorini, Crete, Israel, Cyprus, Mykonos and Kusadasi with Istanbul as our final stop.  I can’t think of a more enjoyable or luxurious way to travel.

Since it was a wine and food themed cruise, several other presenters spoke or demonstrated on board including Chef Azmin Ghahreman of Sapphire Restaurant in Laguna Beach, California, the “Modern Mixologist” Tony Abou-Ganim, and Darioush Khaledi, owner of Darioush Winery in Napa Valley.

On our first full day at sea, Mr. Khaledi presented his wines in a tasting billed as Bordeaux vs. Napa.  Bart Dufour, the head sommelier for the cruise, introduced him and spoke about the Bordeaux wine.   From the start, however, Darioush made it clear that the wines should be judged on their own because what is being produced in Napa is very different from what they are doing in Bordeaux. 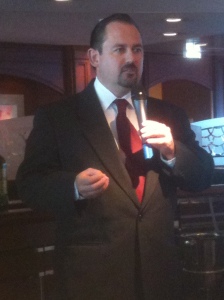 The glasses used for the tasting were very unusual.  Mr. Dufour said that the glasses, made by the Reidel Glass Company of Austria, were made solely for tasting wine, not drinking it. The tulip shaped bowl rested on a hollow stem one inch wide and two inches high. The wine was poured into the stem and the bowl remained empty. In order to coat the sides, Mr. Dufour laid a glass on its side and the wine went to the edge and stopped. He then turned the glass until it was coated with wine. This works great but care must be taken not to pour a little too much wine into the stem or it could spill out.

The wines of Darioush Signature Series

Darioush said that there were 60 different types of soil in the Napa Valley and that during the harvest the grapes can be picked at three different times.

Russian River Chardonnay 2007 100% Chardonnay. The wine is barrel fermented and spends 11 months in 75% new French oak and 25 % in used barrels of Siruge, Damy and Francois Freres Burgundian barrels. Darioush said that there was very little rainfall and that it was the lowest Chardonnay yield of the decade.  Darioush does not own this property. This is a big Chardonnay but not over the top with citrus fruit and hints of white peaches and nice acidity.

Napa Valley Shiraz2007 100% Shiraz. The wine spends 18 months in new French oak Siruge, Damy and Francois Freres Burgundian barrels.  Darioush said that the length of time a wine spent in wood depended on the vintage.  This was one of the biggest wines that I have ever tasted with a mixture of chocolate, spice, bold fruit and a hint of cinnamon.

Darioush was born in the Shiraz region of Iran. He is very fond of his Shiraz wine and feels this is the correct name for the grape. He also said that he believed that Iran, and in particular the city of Shiraz, was where wine was first made.

Napa Valley Cabernet Sauvignon 2007 85% Cabernet Sauvignon, 7% Merlot, 5% Cabernet Franc and 3% Malbec. The wine is aged for 22 months in new Taransaud Chateau traditional French oak barrels from Troncais. There was a mixture of mocha and bold fruit with under tones of expresso.

Later in the cruise, I had the chance to taste the olive oil from Darioush.  It was excelent.

Sangiovese in Tuscany was the title of  tasting that I did on the last day at sea, but more on that next time.