As many of you know, I spend a lot of time in Naples and on the Amalfi Coast. I believe that the white wines of Campania come from the most diverse grapes and are the best wines that southern Italy has to offer. Therefore I was delighted to accept an invitation from Vito Polosa, Chef/Owner and Sommelier at Aroma restaurant in NYC for a dinner featuring the wines of De Conciliis in the Paestum region of Campania. Vito said he would match each of the wines with a dish from the Campania area

The speaker for the dinner was Dino Tantawi, owner of Vignaioli Selections, the importer and distributor of De Conciliis.  Dino has a great passion for Italian wine.  Anthony De Conciliis, a cousin of Bruno Conciliis, the owner of the winery, was also there. I had a long discussion with him about pizza restaurants in Naples and restaurants in Campania.

Dino told us that Bruno Conciliis has a respect for nature and the land. This means that the use of chemicals is kept to a minimum and the winery is moving from being organic to biodynamic and should be certified by 2015. Natural yeast is used whenever possible. The winery has been energy self-sufficient since 2007.

Selim Spumante Brute NV made from Aglianico and Fiano.

Area of production is the Alto Clinto in Campania. The vineyards are at 750 ft with a southwest exposure. The soil is flinty, calcareous with mixed clay. The Charmat method is used to produce this sparkling wine. Dino said Fiano and the Aglianico are picked early while the Aglianico is still pink in color. The gapes are shipped to Valdobbiadene (famous for Prosecco) for fermentation. Dino explained that ripeness of the grapes causes a low PH balance of 3.1 giving the wine a dry and fresher taste on the palate. This is the first Aglianico-based sparkling wine produced in Campania. $21

Bruno Conciliis is a big jazz fan and if you read the name of the wine backward it is Miles in honor of a song by Miles Davis the jazz musician. 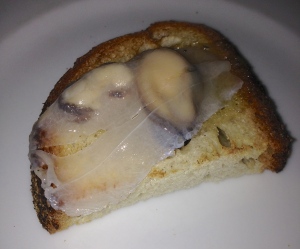 With the sparkling wine Vito served an assortment of appetizers including crostino “cozze e lardo,” with mussels and lard, which was a very good combination.

Donnaluna 2011 Made from 100% Fiano. The grapes are picked in the morning from 6 different vineyards. Then a few hours of cold maceration takes place after which the grapes are washed and then fermented. Dino said that the Fiano here was different from the Fiano di Avellino. The exposure is southeast and the soil is clay, tufo and mixed sand and rocks. Fermentation takes place in stainless steel for 6 days. The wine is then racked into stainless steel tanks where it remains for 5 months. Malolactic fermentation does not take place. The wine is in bottle for 3 months before it is released.$28

This was served with “pesce marinato”, marinated fish. Vito explained that this was a typical Neapolitan dish made from different fish and was left in the refrigerator and could be eaten when anyone felt hungry.

Someone asked why the name of the wine was written upside down on the label Dino said Bruno did it as a joke saying “if you drink from the bottle the name is in the right position!” The is a very elegant Fiano with good citrus  aromas and flavors, a hint of honey and almonds, nice minerality and good acidity 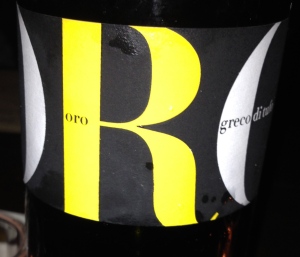 Greco di Tufo”Oro” DOCG  2011 100% Greco di Tufo-these grapes were purchased by Bruno from a friend. The vineyard is in La Sela-Fontanarosa (Avellino). The exposure is North-Northwest and the soil is chalk, volcanic and clay. The wine is fermented in stainless steel and batonnage is for two months. The wine is then racked into stainless steel tanks where it is aged for 7 months and 3 months in bottle before release. The wine was a golden color and Dino said that was because the wine spent some time on the lees. $20

With this wine we had one of my favorite dishes spaghettino vongole veraci e ciliegino napoletano, spaghetti with tiny clams and cherry tomatoes,  and it was perfection. This is a wine with a golden color, nice body, good fruit, a long finish and very pleasing aftertaste.

Ra! (passito) Dino said that the wine is mostly Aglianico with a little Barbera. The grapes come from two different vineyards; Carpinet vineyard which is at 300 mts with a northern exposure and Cannetiello which is at 150 meters with a southwest exposure.  The soil is sandstone, soft marl and sandy shale and calcareous clay with sand. The harvest is at the end of October and the training system is single guyot.

The grapes are dried for six months (appassimento) in a shady ventilated area. Manual destemming and selection takes place. The wine is aged for 4 to 5 days in class demijohns. Dino said this was done to preserve the freshness and flavors of the wine. 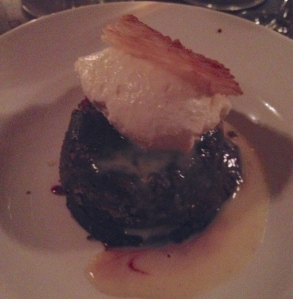 With this dessert wine Vito served a traditional Neapolitan dessert, eggplant & chocolate tortino. What made it a perfect combination was the intense dark fruit aromas and flavors of the wine and the hint of cherry. Dino said that the wine was named after the Egyptian sun god “Ra”! because the wine is made from the concentrated power of the sun. This is a very special dessert wine and only a very small amount is made. At this time it is not available in the US.