A Taste of Italy with Doctor Wine

Daniele Cernilli, aka Doctor Wine, hosted “A Taste of Italy” session on Zoom.

Nine wines from different regions of Italy arrived so that participants could taste and discuss. The samples were sent in very small bottles with twist off caps.

I guess this method was chosen since it was easier and less expensive to ship. The name of the wine and a number was on each bottle so there would not be any confusion.

There will be two blogs focussed on these 9 wines. The first blog will concern the 4 wines from wineries I have visited or have hosted tastings for. The next 5 will follow in another blog.

Caprettone “Ayete” 2019 Vesuvio Caprettone DOC Casa Setaro (Campania) made from 100% Caprettone. The production zone is at 250/300 meters in the Trione della Guardio in Vesuvius National Park.

Massimo Setaro, owner of the winery, was one of the speakers. I met Massimo in Rome where I tasted his wines and also visited the winery. He spoke about the soil and said it is volcanic and sandy with a layer of lava on the surface and volcanic stone. Because of this there is a mineral character present in the wines. This composition of the soil makes the vines immune to phylloxera so the vines are not grafted onto American rootstock. If phylloxera  attacked a plant it would destroy it but would die in the soil before it reached another plant. The training system is guyot. Vinification: Maceration in steel tanks at a controlled temperature and fermentation lasts for about 20 days in amphora and tonneaux. The wine remains in steel tanks for about 6 months and then in bottle for two months before release. The wine has hints of citrus fruit, herbs, and cedar with balsamic notes, nice minerality, soft acidity and a long finish.

Le Sabble dell’Etna Rosè DOC 2019 Firriato (Sicilia) made from Nerello Mascalese from territory of Castiglione (Catania, Sicily). Cavanera Etnea Estates. Grapes are from different vineyards on the North side of Mt. Etna. The soil is loamy-sandy of volcanic origin with good drainage. Exposure is northeast and the vineyard is at 720 meters. The training system is Cordon Royat. There are 4,000 to 4,500 plants per hectare. The grapes are hand harvested the first week of October. Fermentation is for 15 days. Soft pressing for about 2 hours, slight skin maceration and static sedimentation. The wine spends 3 months on the fine lees in stainless steel tanks with daily shaking. After 3 months in bottle the wine is released. This is a fruity wine with hints of strawberry, raspberry, and a hint of citrus fruit. I visited the winery a number of years ago and more recently hosted a lunch and tasting of the wine at Norma Restaurant in NYC.

Chianti Classico DOCG Gran Selezione “Don Tommaso” 2016 80% Sangiovese and 20% Merlot Principe Corsini, Villa Le Corte (Toscana). The winery is located in San Casciano Val di Pesa. The vineyards are at 270-350 meters and have a southern exposure. The Pilocenic hills are rich in river stones. There are 5,800 plants per hectare. The training system is low-spurred cordon and the average age of vines is 25 years. This is a selection of the best grapes. They are hand harvested, destemmed and put in pen frustum, cone–shaped stainless steel tanks at a controlled temperature. After 24 hours at 20°C the grapes are inoculated with selected indigenous yeasts. Fermentation for the Sangiovese is 18 days and for the Merlot is 16 days at a max temp of 28°C. The wine is aged in 70% in new barriques and 30% in used barriques for 18 months and 12 months in bottle before release. The wine has hints of blueberries, cherries and lavender with a touch pepper and a note of wild fennel. Daniele said 2016 was the best vintage in Chianti in over 10 years. I did not visit this winery but hosted a dinner for them a few years ago in New York City and really liked their Chianti Classico.

Montepulciano d’’Abruzzo “Toni” 2017 Cataldi Madonna (Abruzzo) Made from 100% Montepulciano D’Abruzzo from the Cona vineyard near Ofena. The soil is clay loam rich in calcareous skeleton. Elevation is 1,250 feet with a Northwest exposure. Vines were planted in 1990 and the training system is spalliera. Fermentation takes place in stainless steel and the juice remains in contact with the skins for 20 to 25 days with regular delestage and pumping over. The wine is aged in French oak barrels for 12 months and in bottle for 18 months before release. This is wine with body and hints of dark fruit, black cherries, prune and a touch of smoke. It has a long finish and pleasing aftertaste. Daniele really liked this wine and said it was real Italian wine.

I visited the winery twice the last time in 2019 and always enjoyed their wines. Giulia Cataldi Madonna now runs the winery. She is the fourth generation of here family. She was present on Zoom.

Duccio Corsini and the Wines of Principe Corsini

Two weeks ago I hosted a tasting for wine journalists at Il Gattopardo Restaurant in NYC. One of the featured wines was the Chianti Classico Gran Selezione 2013 of Duccio Corsini. The wine had hints of dark cherries, plums, violets, dried roses, licorice and spice and I was very impressed by it.

A few days later, I had the opportunity to host another dinner and tasting, featuring again the wines of Duccio Corsini, this time including vintages of Don Tommaso going back to 1998.

Duccio Corsini is the owner of Principe Corsini wines and the Villa Le Corte estate. He is a counselor for the Chianti Classico Consortium. The Corsini Family is one of the oldest in Italy, going back to the 13th century. One of Duccio’s ancestors, the Cardinal Lorenzo Corsini, became Pope Clemente XII. If you visit the Villa Corsini in Rome you can see a painting of the Pope. In fact it contains one of the most important collections of paintings done after the year 1000 A.D including a painting of Saint John the Baptist by Caravaggio. 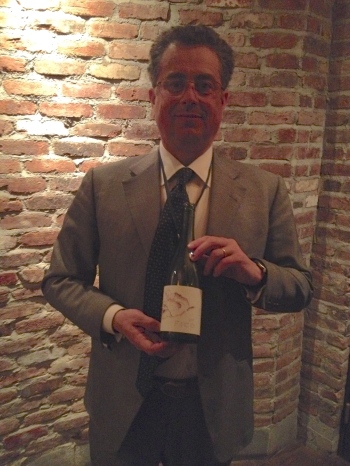 At the tasting, Duccio told us about the estate and the wines and how the most recent release of Don Tommaso was produced.

Chianti Classico DOCG Gran Selezione “Don Tommaso” 2013 80% Sangiovese and 20% Merlot Principe Corsini, Villa Le Corte. The winery is located in San Casciano Val di Pesa. The vineyards are at 270-350 meters and have a southern exposure. Pilocenic hills rich in river stones. There are 5,800 plants per hectare. The training system is low-spurred cordon and the average age of vines is 25 years. This is a selection of the best grapes. They are hand harvested, destemmed and put in open frustum, cone–shaped stainless steel tanks at a controlled temperature. After 24 hours at 20°C the grapes are inoculated with selected indigenous yeasts. Fermentation for the Sangiovese is 18 days and for the Merlot is 16 days at a max temp of 28°C. The wine is aged in 70% new barriques and 30% in used barriques for 18 months and 12 months in bottle before release. 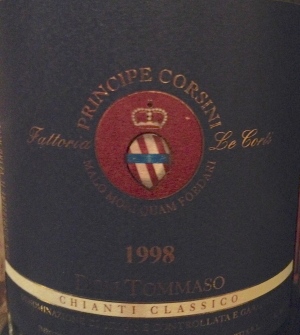 2010 Gran Selezione made from made from 80% Sangiovese and 20% Merlot. 70% of the wine is aged in new barriques and 30 in used barriques for 18 months and 12 months in bottle. I believe 2010 was the first year for the Gran Selezione category.

2013 Gran Selezione is the present release  – after tasting all of the different vintages of Don Tommaso it was easy to see that the different vintages had much in common and just got better as they aged. These wines are true Chianti Classico, with all the flavors and aromas one would expect from a great Chianti Classico. They are excellent food wines.

The wine I drank the most of was the 1998. It was starting to become mellow but still could age for a number of years.

When asked why he uses Merlot in the Don Tommaso, Duccio explained that Sangiovese has “rough edges and the Merlot smoothes them out.” He then pointed out that the Don Tommaso is the only wine he produces that has any non-Italian grapes.

Duccio said in recent vintages they are using less new barriques and are introducing some large barrels.

Fico 2015 IGT Toscana 100% Sangiovese From the Gugliaie vineyard, the name of the wine comes from the fig tree on the boundary of the vineyard, one of the finest on the property. Only organic farming methods are used. The wine is unfiltered and there are NO sulfites added.

The vineyard is at 270 meters with a southern exposure. There are 5,000 plants per hectare and the training system is spurred cordon. The vineyard is 2.6 hectares and the average age of the vines is 19 years. The harvest is manual. Destemming takes place and fermentation, in open vertical French oak barrels for 16 days. There is daily pumping down of the cap during fermentation. Bottled June 2016. There were only 280 bottles produced.

This wine was created by Filippo Corsini, the young son of Duccio who died tragically in a road accident in London on October 31. Duccio said that the wine is Filippo’s interpretation and own personal vision of winemaking.

This was the most unusual 100% Sangiovese I have ver tasted. One of the other journalists present said it tasted like a Pinot Noir, and we all agreed. It is a very elegant wine with subtle red fruit flavors and aromas.

Vino Spumante Rosato 100% Sangiovese San Casciano in Val di Pesa, Florence, the exposure is south and the average age of the of vines is 18 years. Charmat method is used through a soft pressing of whole grapes. Fermentation is on the must for 24 days at a low temperature (14°C). Secondary fermentation for 12 weeks and elevage on the yeasts for 1 month. The wine was bottled September 2015. It has nice bubbles with hints of pomegranate, strawberries and cranberries. 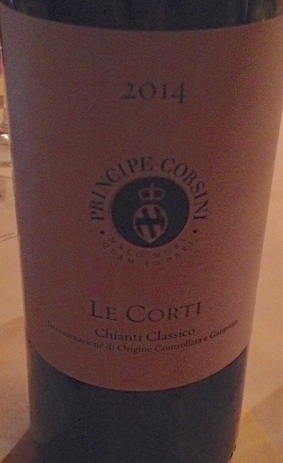 Villa Le Corti Chianti Classico DOCG 2014 San Casciano in Val di Pesa, Florence. Made from 95% Sangiovese and 5% Colorino. The vineyards are at 270 to 350 meters and the exposure is south. Soil: pliocenic hills rich in river stones and there are 5,800 plants per hectare. The training system is low spurred cordon and the average age of the vines is 25 years old. Harvest was from September 18 to September 29th. Fermentation is for 20 days at 28°C in open-air tanks with temperature control. The grapes are inoculated with select indigenous yeasts. Wine ages partially in vitrified cement vats for 12 months and part in large wood barrels.

Cortevecchia 2014 Chianti Classico Riserva 2014 harvest is by hand and grapes are destemmed and put in open air tahks with a temperature controlled system. After 24 hours at 20C. The grapes ate inoculated with select indigenous yeasts. Fermentation is for 14 days at 28C. The wine is aged for 20 months in big oak casks and part in tonneaux. The wine remains in the bottle for 6 months before release.

Vin Santo del Chianti Classico DOC 2004 60% Malvasia and 40% Trebbiano. Harvest by hand, grapes dried for 3 months “appassamento.” The dry grapes are pressed at the end of January and the juice is fermented in small barrels for 5 years. The wine “rests” for 10 years in the dark cellar before release. There were only 460 bottles produced.

Duccio said that this wine is very expensive to produce. First because it takes so long to reach the market and because after the wine ages for 5 years, he tastes it and if it does not measure up to his standards he will discard the wine. The wine has hints of honey and dried fruit, especially apricot. Very pleasant way to end a wonderful tasting.