Pure Chablis- Only From France

A piece of stone had been placed in the middle of the table at the Gotham Bar and Grill in New York City where I was attending a Chablis tasting.  It looked like a piece of limestone with tiny pieces of white shells imbedded.  I guessed that it was a chunk of the famous soil of Chablis, which gives the wine its unique minerality. 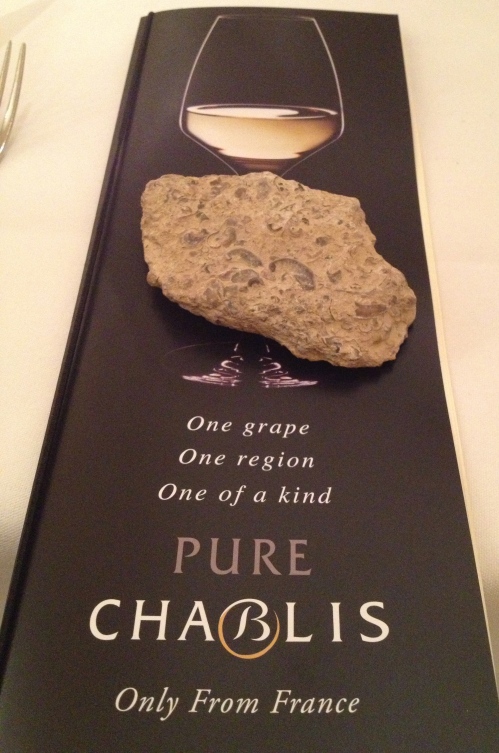 The two speakers at the tasting were introduced as “Chablis Ambassadors” Jean-Francois Bordet, President of the Chablis Wine Board.  He is the 13th generation of his family to run the Séguinot-Bordet Winery, and Christian Moreau, a leading producer of Chablis and a man that I have heard speak over the years.  I have great respect for his knowledge of Chablis.  There were only 4 journalists at the lunch so we were able to really get to understand Chablis. 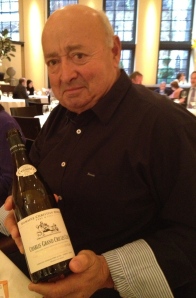 I asked Jean-Francois what was their attitude toward the rest of Burgundy and he said that they were the Corsica of Burgundy–meaning that they had a certain independent attitude.  As Rosemary George in her book The Wines of Chablis states, “Chablis is Chardonnay but not every Chardonnay is Chablis” 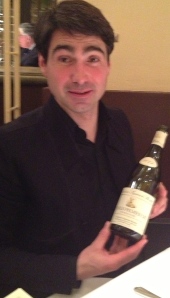 Domaine des Malandes Chablis 2010 The soil is rich Kimmeridgian, clay of the upper Jurassic geological period. The average age of the vines is 35 years and they are on a gentle slope at an altitude of 150 to 250 meters. Harvesting takes place by machine. Alcoholic and malolactic fermentation take place in temperature controlled stainless steel tanks. The wine is aged 6 to 8 months in stainless steel tanks. Cold stabilization is at -5 degrees C for one week. The wine is bottled every month from April 2012 to March 15, 2013 . This is a wine with fresh fruit aromas and flavors, a hint of peaches and good minerality.  $20

Domaine Séguinot-Bordet Chablis Premier Cru “Fourchaume” 2011. The soil is Kimmeridgian limestone and the age of the vines is 30 to 45 years old with a south/ southwest exposure. The harvest is both manual and mechanical. Vinification is according to the domain’s own special quality charter. The wine spends 2 to 4 months on the lees. Aging takes place in temperature controlled stainless steel tanks. $29 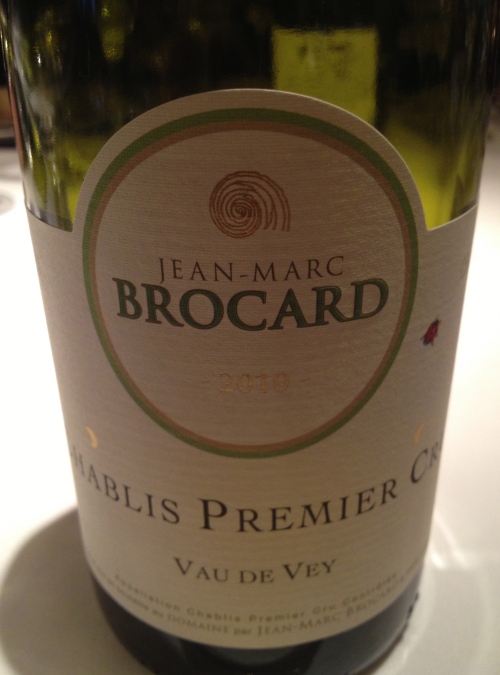 Jean-Marc Brocard Chablis Premier Cru “Vau de Vay” 2010. The soil is clay and limestone of the type and the vines are 35 years old. The harvest is manual due to the steep hillside pitch. Pneumatic pressing of the grapes and fermentation with indigenous yeast at controlled temperatures in stainless steel tanks. 100% of the wine undergoes malolatic fermentation. The wine is aged on the lees in stainless steel vats. The winery is in the process of becoming organic. $30

Both Chablis and Chablis Premier Cru are a very good value for the money.

Domaine Christian Moreau Pére et Fils Chablis Grand Cru Les Clos, Clos des Hospices 2010. The soil is Kimmeridgian marl-calcium carbonate (upper Jurassic) and is rocky with white dense clay. The vines are 29 years old.  Harvesting is by hand, carried by small trailers which unload the grapes by vibration to avoid crushing. A sorting table is used to eliminate unripe or damaged grapes. Vinification takes place in stainless steel tanks and fermentation is with indigenous yeast. Aging is for 12 months in barrel–90% that are 1, 2, and 3 years of age- 10% in new and 1-year-old barrels. There is natural tartaric stabilization after 8 months of ageing. 100% of the wine goes under malolactic fermentation. $105

Chablis Grand Cru is a bigger, richer, rounder wine with more depth but even at $100 a bottle it is worth the money.

Domaine William Fèvre Chablis Grand Cru 2009. The soil is chalky clay, marl and Marley limestone from the Kimmeridgan era. The vines are 40 years old. Harvesting is manual and the grapes are put into small cases, holding up to a maximum of 13kg to avoid compressing the grapes and bursting the berries. There is a systematic use of a sorting table.  They use the principle of gravity to avoid all pumping. There is a brief 1-½ to 2 hour pneumatic pressing to obtain a gentle separation of the solids and liquids of the grape. Very light static settling of the juice to preserve enough fine lees so that the alcoholic and malolactic fermentation can occur naturally. The must is then run into French oak barrels. Ageing takes place for 12-15 months, on fine lees, in French oak barrels. The stirring of the lees depends on the vintage. $99