The 2014 International Pinot Grigio Challenge was held in Corno Di Rosazzo, near Udine in the Northeastern Italian region of Friuli Venezia Giulia in Italy. I like the food and the wines of the region and have always enjoyed its Pinot Grigio, so I was delighted to be invited to be one of the judges. 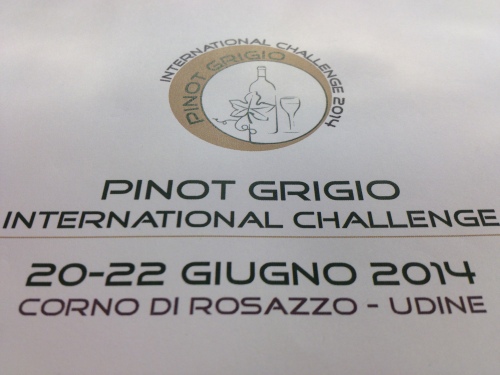 The event took place over three days. The first day there was a round table discussion on Pinot Grigio: “Commercial Challenge on the World Market.” There were a number of speakers, including myself, and I found the conversation to be most interesting

Some of the topics discussed included the reasons for the popularity of Pinot Grigio, how to improve its image, Pinot Grigo in different countries and the other names for Pinot Grigio

Pinot Grigio came to Italy after the phylloxera plague in Europe in the late 19th Century. It most likely originated in Burgundy and is a genetic mutation of Pinot Noir. It is grown mostly in northeastern Italy. The best examples in my opinion come from Friuli Venezia Giulia and Trentino Alto Adige

Pinot Grigio is not a white grape as can be seen by looking at the bunches. The must of the grape is basically copper in color, of anthocyanin origin, that does not always persist through bottling. This has to do with the presence or lack of oxygen during fermentation.

In the 1960’s Santa Margherita, thanks to the latest vinification techniques, was able to produce a white wine changing the history of the grape forever. By the 1980’s Pinot Grigio from Italy became so popular that it is looked upon as an Italian grape in the eyes of the world. Today Pinot grigio enjoys world wine popularity and is the number one grape varietal imported into the USA with over a 40% market share.

Some of the bottles

Some producers have gone back to the old style and produce a wine, which is copper/ orange in color. An example of this was the #2 wine in the Challenge, “Gossip” by Di Lenardo

The judging took place on the second day. The idea for the International Pinot Grigo Challenge came from Daniele Cernilli, known as “Doctor Wine.”

With Cernilli as the head, 24 judges from many different countries were to taste the wines blind and select the winners. There were 128 wines from all over the world. The judges were divided into groups of three. In the first round a score was given to each wine tasted. Next the 3 judges were presented with 2 wines, each judge stated their preference and one wine was eliminated. With 3 judges there could not be a tie. When this was completed there was a break for lunch. After lunch it was the same except there were 5 judges, again two wines were presented and one was eliminated. 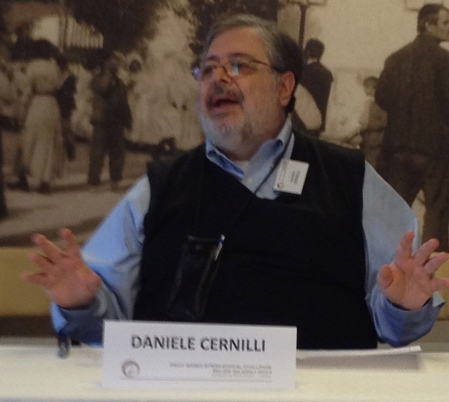 Cernilli called the judging a “winebledon” with direct challenges in couples, like a tennis match, evaluated by mixed and uneven juries.

After this segment was over the votes were tallied and there were 8 finalists.

The third day was the official announcement of the winners and the award ceremony. Listed below are the eight finalists in order. The first three wines were awarded medals. 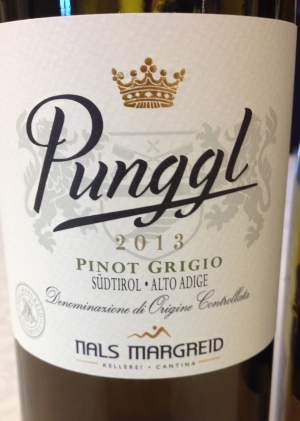 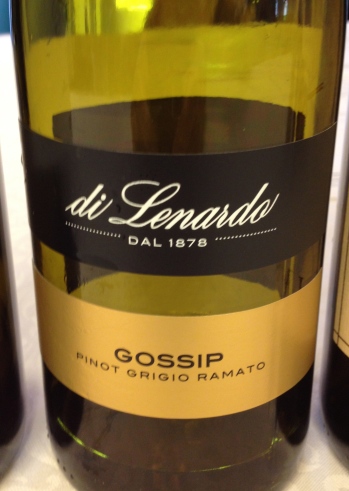 Pinot Grigio Ramato (copper) “Gossip” IGT 2013 Venezia Gulia Di Lenardo Friuli Venezia Giulia Harvest is by hand. The grapes are placed in a tank for 18 hours of skin maceration. Then the skins are separated and the must is transferred to temperature-controlled fermentation steel vats. The wine is on the lees before bottling. For the whole process oxygen does not come in contact with the wine in order to preserve the color. The wine has a light copper color with luminescent clarity. The aromas include wild strawberry, elderberry, hay and dried roses with hints of dried fruits and almond. There is a balance of robust fruit and crisp acidity. It is closed with a composite cork DIAM. 20,000 bottles were produced.  I described  how this wine  because has the ‘copper” color. #2

Pinot Grigio Friuli Grave DOC 2013 I Magredi Friuli Venezia Giulia. This wine of the final eight was given the award for best value for the money. #3

Three of my favorite producers were in this group: Di Leonardo, Venica & Venica and Elena Walch 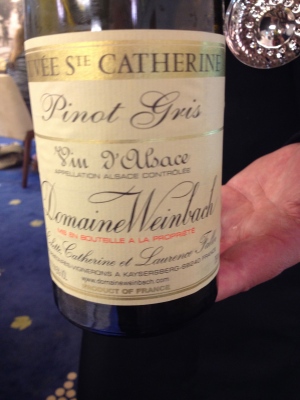 Looking back over the wines that I chose all of them were from Friuli Venezia Giulia and the Alto Adige. Daniele Cernilli confirmed that I voted for the number one rated wine.