Making Mozzarella and Burrata at Keste

I often go to Keste Pizza & Vino Wall Street and always enjoy the pizza and other foods made by the owner/pizzaiolo Roberto Caporusico. I look forward to speaking to Roberto about pizza, Naples and food in general. Roberto has mentioned a few times that he now makes his own mozzarella and burrata. The last time I was there I had the chance to try his burrata filled with small mozzarella balls. It was creamy and really different from any burrata I had had before. Roberto said he was doing a mozzarella and burrata making demonstration and invited me to come.

Roberto began by speaking about his background. He said that before he became a pizzaiolo he worked as a cheese maker, making mozzarella, a semi-soft Italian cheese made from the milk of cows or water buffalo. Burrata is made the same way as mozzarella but it is formed into a pouch and then filled with cheese curds and cream. For both the mozzarella and the burrata Roberto uses cows’ milk. When the pouch for the burrata is formed he fills it with small mozzarella balls soaked in heavy cream for 5 days.

Before Roberto  began the demonstration he said  the water he was using was very hot and he put on two pair of black gloves to protect his hands.

These are the curds that are waiting to be mixed with hot water.

The mozzarella balls soaking in heavy cream for the burrata filling.

Roberto making the mozzarella. He is mixing the cheese curds with hot water. 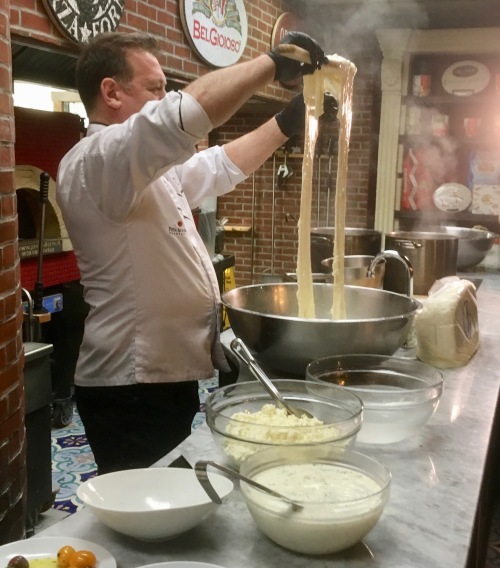 Mozzarella is one of a category of stringy cheeses in Italy 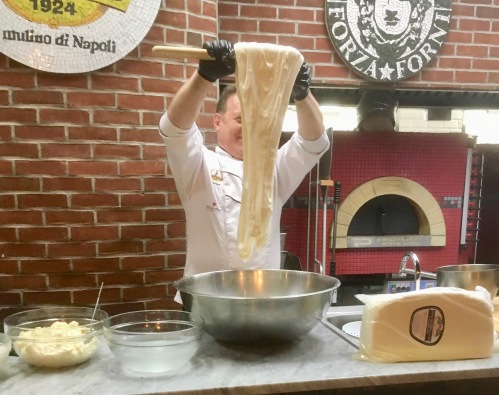 The  cheese  is  smooth  and  stretchy 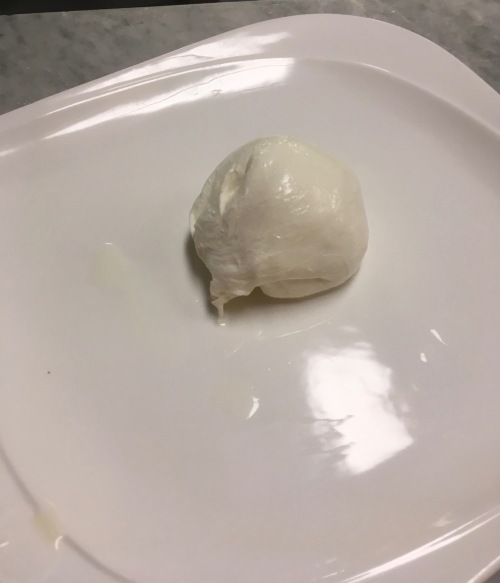 Rolling out the mozzarella to make a roulade

The stretched mozzarella is stuffed with puree of artichokes and tomatoes

Then it is rolled up like a jelly roll 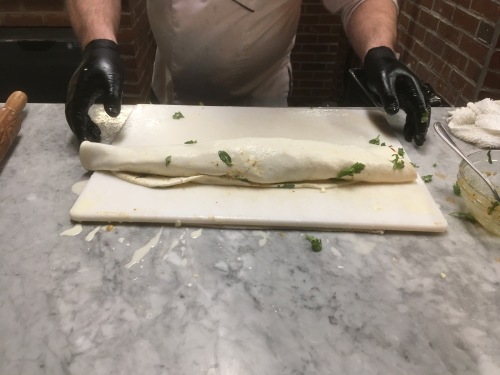 It needs to be refrigerated so it firms up 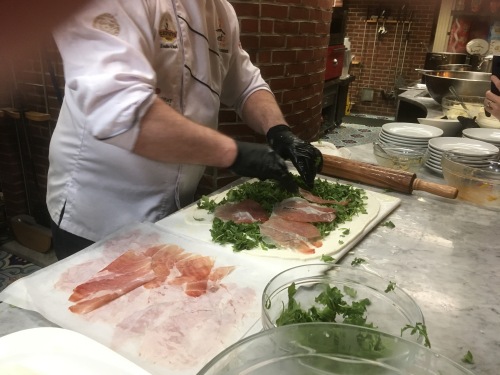 Making another roulade layered with culatello, a type of prosciutto made from the tenderest and most flavorful part of the pig, and greens. 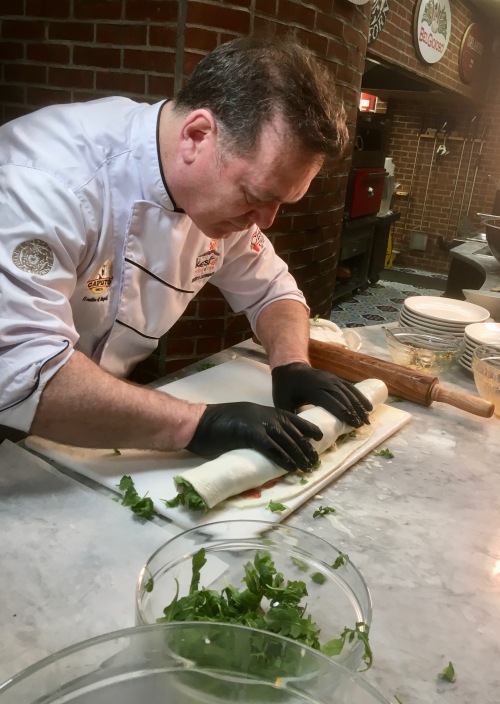 Rolling the cheese and fillings

Slicing the roll into pinwheel slices. 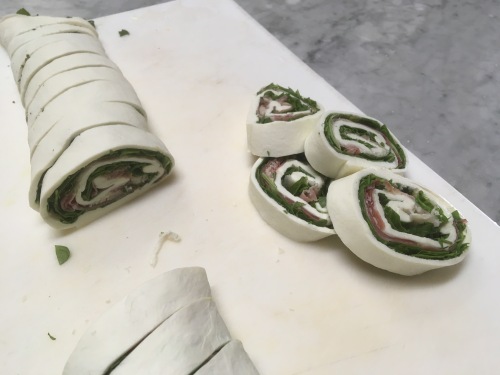 The one with the culatello came out perfect and delicious 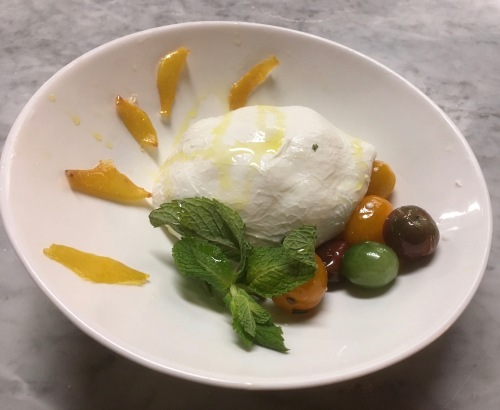 The burrata stuffed with small mozzarella balls soaked in cream

Pizza with burrata and tomatoes made by Giorgia, a master pizzaiolo, and Roberto’s daughter.

With the mozzarella we drank still and sparkling Asprinio  from  Fabulae, Campania Felix Wine

“Jescesoul” Terre del Volturno IGT made from 100% Asprinio. The grapes are grown in sandy soil with good superficial permeability of volcanic origin near the city of Caserta. The training system is Svlvous and Alberate Aversane. The vines are 12 meters tall among poplar trees. Harvest is by hand the last week in September and the first week in October. Fermentation takes place in stainless steel tanks at a controlled temperature for 3 months. The wine remains in the bottle for two months before release. The wine has hints of citrus fruit, a touch of lemon, nice minerality and good acidity.

Asprinio Spumante ‘Aspritz” VSQ made from 100% Asprinio. The grapes are destemmed and a soft pressing takes place. Fermentation is for one month in stainless steel tanks to prepare for the classic method which takes place in the bottle. The wine is then manually capped and rests for 9 months before release. The Spumante was straw yellow in color because the juice was left on the lees and is full bodied. It has hints of citrus fruit, a touch of lemon, with good minerality, acidity and a note of brioche. Both wines were a great combination with the mozzarella but the Spumante was the perfect combination.