A number of years ago I was at Vinitaly and stopped by the stand of the wine negociant Barbara De Rham and tasted a number of wines under the De Rham label. One of them was a Barolo. I was so impressed with it that I asked Barbara for the name of the producer. It was Giacomo Fenocchio. At the time I was the wine director for I Trulli Restaurant in NYC and I added this wine to our wine list.

Last November, I was able to visit the winery for the first time. We were greeted at the winery by the winemaker/owner Claudio Fenocchio. The winery is in the Loc. Bussia-Monforte D’Alba.

Claudio said the estate was founded in 1894 and has been handed down from father to son for over 5 generations. It was Claudio’s father Giacomo who expanded the vineyards and started selling wine to foreign markets. Today 20 hectares are under vines and Claudio and his brothers Albino and Alberto export almost 80% of the production. 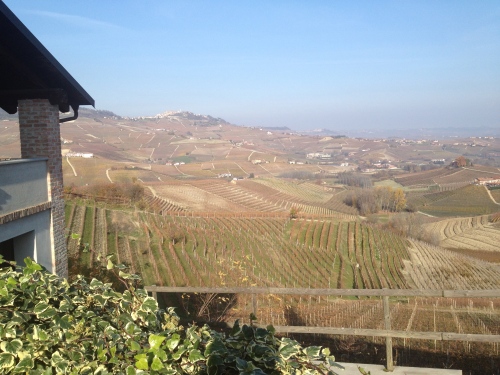 All of the wines are made from the estates vineyards located in Bussia in Montorte d’Alba, the Villero sub zone of Castiglione Falletto and Cannubi in Barolo. All are Grand Cru vineyards.

Claudio’s great-great grandfather Giovanni Fenocchio said “everyone makes wine in the same way, because this is how it should be made, it is not up to us to change an entire method and culture” and the winery maintains this philosophy today. Claudio said that their Barolo has a lengthy period of skin contact, never less then 10 days, and rotary fermentation tanks are not used. There are no shortcuts. Fermentation is completely natural and is entirely carried out by the local micro-flora, without the use of selected yeast. Temperature is kept under control by means of daily pumping over the skin cap.

He said that he was thinking of using molded agglomerated corks instead of natural cork for his wines. These corks allow the wine to breathe and they have different numbers indicating the amount of air that is allowed into the wine. This is not the first time I have seen these corks in Piedmont.

Claudio took us down to the cellar to taste barrel samples of the wine. He said the cellar was constructed in 2000 in the pure and classic style of Piedmont.

Roero Arneis DOCG 100% Arneis from Monteu Roero. The vineyard is 1.5 hectares at 300 to 350 meters, exposure is southeast, the soil is calcareous clay of medium texture, the age of the vines are 10 to 15 years and the harvest is in the middle of September.

The grapes are gently pressed and then the wine must is refrigerated in stainless steel vats to allow the lees to settle. After 24 to 36 hours the juice is separated from the lees and fermented at a controlled temperature. The wine remains in stainless steel tanks until it is ready to be bottled. It is soft and complex with fresh fruit aromas and flavors and a hint of chamomile.

Langhe Freisa DOC 100% Freisa, Monforte d’Alba-Bussia zone. The vineyard is 0.5 hectares at 300 meters. Exposure is west, the soil is Elveziano with clayey sediments, blue marl and tufa. The age of the vineyard is 10 years. Harvest is in early October. Traditional fermentation of the grapes takes place in contact with the skin, without adding yeast, for about 10 to12 days in stainless steel tanks. The wine is aged for 6 months in stainless steel and 6 months in Slavonian oak. It has an intense bouquet with good fruit and a touch of spice. 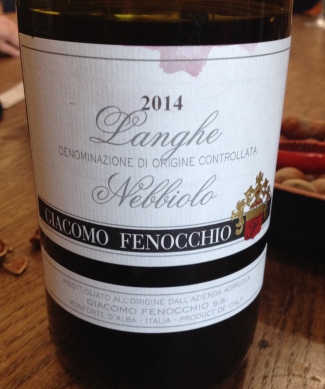 Langhe Nebbiolo DOC 100% Nebbiolo. Monforte d’Alba- Sottozone Bussia. The one hectare vineyard faces east and it at 300 meters. The vines are 15 years old and the soil is Elveziano with clay sediments blue marl and tufa. Harvest is in the middle of October. Vinification and aging same as above with maturation in bottle before release. The wine has hints of cherry and plum with liquorice and roses. 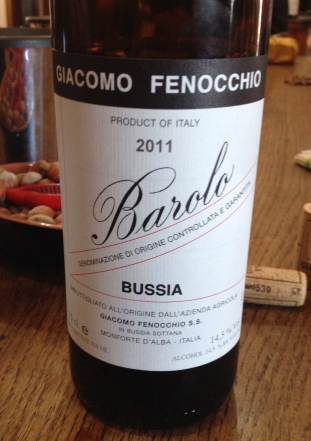 Barolo Bussia 2011 100% Nebbiolo varieties Michet and Lampia. Monforte d’Alba-Sottozone Bussia. From a 5 hectares vineyard facing south/southwest at 300 meters. The soil is Helvetian with clayey and calcareous sediments, rich in iron. The vines are 30 years old.

Barolo Bussia Riserva 2012 100% Nebbiolo-barrel sample.Claudio stared doing 90 days of maceration with the 2010 vintage. This is very rare in Piedmont today and I am not sure if any other producers do this.