Last year at this time Michele and I were in Rome with a friend. We had to leave earlier than planned because of the pandemic. Now we are all missing Rome, so our friend suggested we come to his home and have a lunch like we would have if we were in Rome. Almost.

The tasting notes that follow are by Jason De Salvo and edited by me. I have great respect for Jason’s palate.

Blanc of Cabernet Franc 2019 Halcyon. Made from 100% Cabernet Franc from Contra Costa County on a breezy night in August (according to the label). The grapes arrived at the winery cool to the touch and barely reaching 20 Brix sugar. The clusters were whole pressed and watched to see that the “color” remained clear. This was a surprise wine and it was tasted blind. Because the color was so clear everyone believed it was made from white grapes. The wine is lively with hints of bell pepper, grass, herbs, quince, pears, white flowers and citrus (lime) rind. It is a bit flabby. It is a good summer quaffer. Jason said it would last until 2025 and gave it a 90. 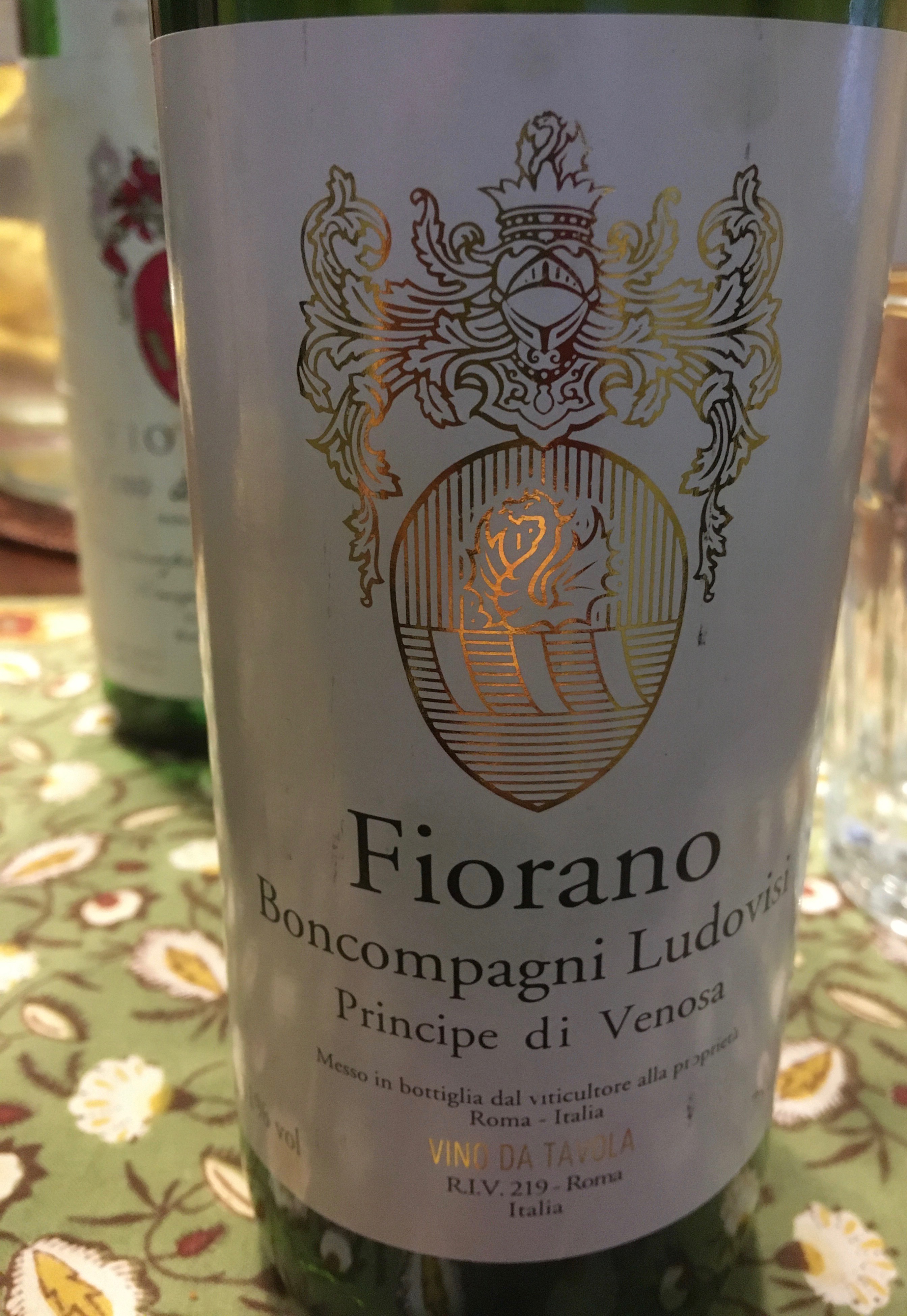 Fiorano Bianco 1995 Boncompagni Ludovisi Principe di Verosa made from 100% Malvasia Candia. I have had this wine a number of times and this was one of the best bottles I have tasted. There is a slight touch of oxidation with aromas of melon, honey wax and Queen Ann cherries. On the palate there are slight mineral notes with lots of flesh, good acidity and a medium long finish. Jason gave it a 92. I gave it 88 but after having it with food I gave it a 90. Jason said it would last until 2030. 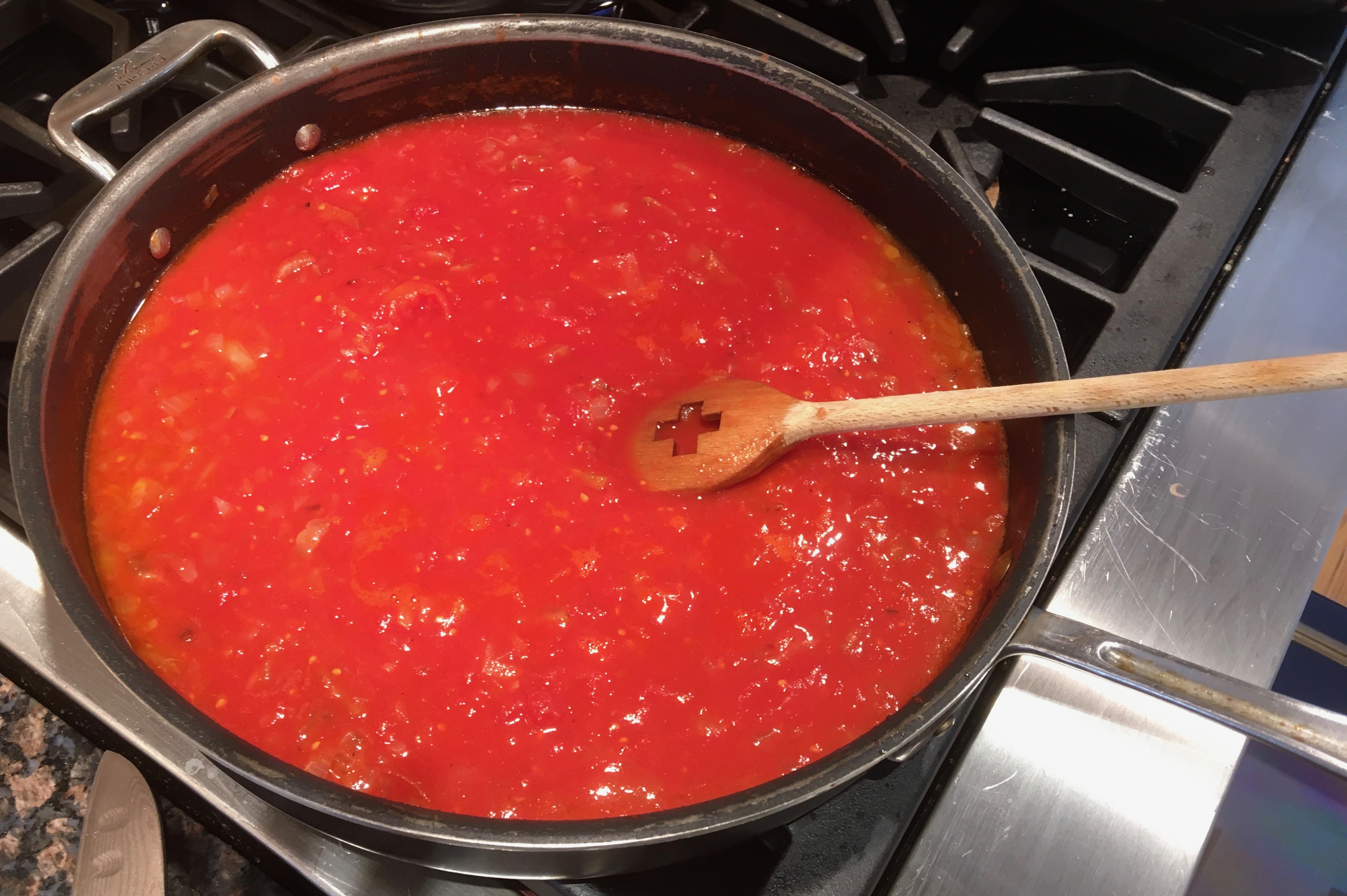 Montesecondo IGT Toscana 2019 Silvio Messana made from 100% Sangiovese from two different biodynamical properties in the San Casciano zone of Chianti Classico. The original (Montesecondo) is lower, warmer with heavy clay soil in the town of Cerbaia. Vignano (village) vineyard is at 500 meters and much cooler and rich in limestone. The grapes come from younger vines and are picked early. Harvest is by hand most but not all of the bunches are destemmed. Varying proportions of whole bunches layered with whole berries go into concrete fermentation tanks. Fermentation takes place with natural yeasts and no sulfur is added. Maceration is short and there are no punch downs or other extractive measures. Aging is in concrete tanks for about a year. The wine has aromas of light red cherries, dried cranberries and herbs. This is a medium bodied wine with nice acidity. Jason gave it a 92.

For our first course, we had Bucatini alla Matriciana, one of Rome’s classic pastas and my favorite. It is made with guanciale (cured pork cheek), onion, tomatoes and a little hot pepper.

Our main course was rack of lamb with a Parmigiano-Reggiano crust. Here it is ready for the oven

The lamb ready to serve

Fiorano Rosso 1985 Vino da Tavola Boncompagni Ludovisi  Alberigo Boncompagni Ludovisi, Principe di Venosa made with Merlot and Cabernet Sauvignon grapes.  Burton Anderson, in his landmark book Vino, called Fiorano Rosso “the noblest Roman of them all”.  The Prince’s few acres of vines are planted along the Appian Way about 20 kilometers southwest of the center of Rome and almost right next to Roman’s second airport, Ciampino. It is the best cabernet/merlot blend made in Italy and one of the best in the world!  In my opinion–and I am in the minority here–one of the best places in the world to grow Cabernet Sauvignon and Merlot is in Lazio close to Rome. The wine has aromas of black cherry, blackberries, and saddle leather, with subtle hints of VA. On the palate it is smooth, with pure fruit, lovely balance and a long pure finish. What a pleasure. Jason gave the wine a 95 and believed it would last until 2050. I gave it a 98 it was more than wonderful.

Chateauneuf du Pape 2004 Domaine du Pegau made from 85% Grenache, 9% Syrah and 4% Mourvedre, Counoise and others. They have 21 hectares of vines in Chateauneuf du Pape. 19.5 hectares are red grapes. The vineyards are located In many different areas. The oldest and best in the plateau of La Crau. The grapes are not destemmed, only natural yeasts are used. The grapes are whole cluster fermented in traditional cement vats. The wine is aged for about 24 months in a wide range of different old wood foudres. The oldest is about 90 years of age and was made from wood imported from Russia. Others come from many different places ranging from Eastern Europe to France. They range in size from 27 to 60 hectoliters. On the palate, the wine is spicy, meaty, and tastes of dark berries, and black pepper. This wine was also tasted blind. The type of wine was guessed but not the producer. The wine has aromas of dried cherries, blackberries, cranberries, pipe tobacco, and cloves. This is a full bodied wine with extracted fruit and a very long finish. Jason gave the wine 94 points.

It was Valentine’s Day and so Deb De Salvo made us a glorious dessert—a chocolate soufflé pie in a chocolate crust. I ate two slices and it was hard to stop there. 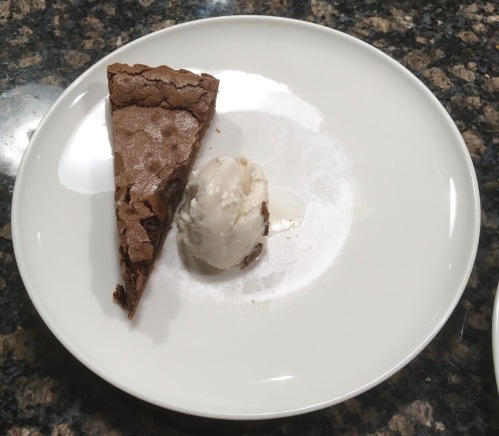