The Wines of Umani Ronchi

Ever since I first visited Verdicchio a number of years ago, I have enjoyed the region’s wines.  Now when I look for an older white wine on a restaurant wine list I often order Verdicchio because very few people know that it is a white wine that can age and older vintages can often be found at a very good price.

Recently, I was invited to Del Posto in NYC to taste Verdicchio and some other wines from producer Umani Ronchi.  The speaker for the event was the very charming and knowledgeable Michele Bernetti.  He explained that the company was founded by Gino Umani, who added Ronchi to his name as a favor to a friend in return for vineyards in Cupramontana.  Members of the Bianchi family went into partnership with Umani Ronchi and later became the winery’s sole owners.  Massimo Benetti, Dr. Bianchi’s son-in-law took over the management of the company and Michele joined his father.  Today he is the CEO. Beppe Caviola is their consulting enologist. 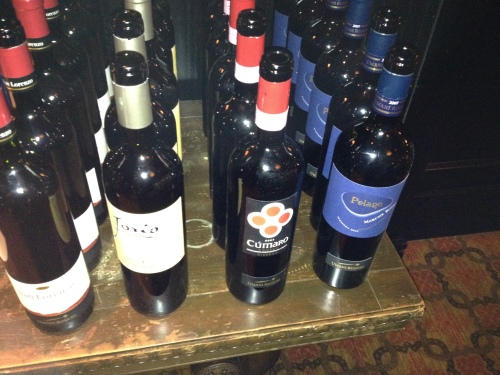 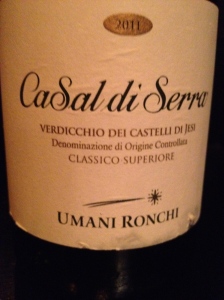 Verdicchio dei Castelli di Jesi DOC Classico Superiore 2011 “Casale Di Serra” 100% Verdicchio. Michele said that the grape yield of this vineyard was less than one half of the typical Verdicchio yield. The grapes are hand picked when slightly overripe and a careful selection is made. Fermentation takes place in temperature controlled stainless steel vats, followed by malolactic fermentation. This is a very nice fruity wine with good acidity and minerality and a bargain at $17

Verdicchio dei Castelli di Jesi DOC 2007 & 2009 “Vecchie Vigne” 100% Verdicchio. These wines are 35 years old and come from the “Busche” vineyards in Montecarotto. The wine is aged is stainless steel and cement tanks. The wine undergoes malolactic fermentation and remains on the lees for 10 months. Michele said that there is a difference between the two wines. The Vecchie Vigne (Old Vines) is made from a special selection of grapes from the highest part of the vineyard on the east bank Esino River. This is a wine the will age very well. The 2007 is one of the best white wines I have tasted and it could last for many more years. It was fresh and elegant with hints of pineapple, peach and hazelnut and good acidity. All of the wines had a very nice mineral character and Michele said that this was a characteristic of the Verdicchio grape in the Marche.  2009 vintage was the Gambero Rosso Vini D’Italia Three Glasses award winner and the White Wine of the year. $35 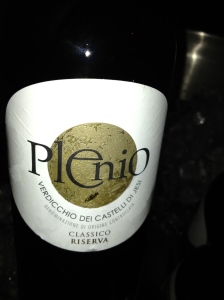 Verdicchio Classico DOC Riserva 2007 “Plenio” 100% Verdicchio from the “Villa Bianchi” vineyard in Moie di Maiolati.  Riserva wines were recently introduced for Verdicchio at the winery and must be aged for at least 24 months. After malolactic fermentation, the wine is aged in concrete vats for 12 months with lees contact and refined in bottle for one year before release.  Michele said that Pienio is Latin for round, complete and ample–a fitting name for this wine. $35

Rosso Conero DOC “San Lorenzo” 2010 made from 100% Montepulciano from the San Lorenzo vineyard. Malolactic fermentation is followed by aging in oak barrels for 18 months. 20% of the wine is aged in barriques. It is refined in bottle for 6 months before release.  Very nice easy drinking wine with nice black and red fruit aromas and flavors.  $17

Montepulciano D’ Abruzzo DOC “Jorio” 2010 100% Montepulciano from a single vineyard on one of the highest altitudes in the Chieti province.  After malolactic fermentation the wine is aged in Slavonian oak barrels for 11 months. Michele said that in 1999 they purchased an estate in nearby Abruzzo in the Colline Teramane area, a sub zone within the Montelpulciano D’Abruzzo DOC (soon to become DOCG). The estate includes 30 hectares of land, a cellar and landmark house, which is being renovated and transformed into a winery. He also said that since it is warmer in Abruzzo, the Montepulciano grape ripens sooner than in the Marche were the vineyards are by the sea and he feels they make a more elegant wine. Because of these natural differences they are two different styles of wine. This was a bigger wine with more ripe red and black flavors and aromas. $17

Michele said that in the Marche the vines are mostly trained in a Guyot-Double Inverted. In Abruzzo the Tendonne method is used because it protects the grapes from the sun.

Rosso Conero  Riserva DOCG “ Cumaro” 100% Montepulciano from the “San Lorenzo” vineyard. Malolactic fermentation is followed by aging in barriques for 16 months. The wine is kept in the bottle for another six months before release. Michele said that this wine is made only in the best years. Cumaro is derived from the ancient Greek word for Conero. We tasted the 1995, 1997, 2001 and 2007, which is $42 a bottle. This is a wine that can age.  The 1995 was in great condition and I enjoyed all of the vintages. However I noticed a little more vanilla flavor in the 2001 and 2007

“Pelago” Marche IGT made from 50% Cabernet Sauvignon, 40% Montepulciano and 10% Merlot. The grapes are hand picked from a small vineyard. Fermentation lasts for 15 days and then the wine is aged in new barriques for 14 months and remains in the bottle for another 12 months before release. Michele said that the name “Pelago” derives from the ancient Italian word for deep blue sea since the vineyards are by the sea. The first vintage was 1994. We tasted the 1995, 1997, 2001 and 2007 which is $65 a bottle. This was a very well made wine of its type but I found it a little too modern for me, especially the 2001 and 2007.