One of my favorite pizzerias in New York is Don Antonio by Starita. (309 West 50th St, NY, NY). I first met the owner/pizzaiolo Roberto Caporuscio when he opened Keste on Bleecker Street. Michele and I had just returned from Naples where we ate pizza every day, sometimes twice a day. At Kesté, it was like being back in Naples, the pizza was that good and authentic

At Don Antonio by Starita, Roberto has come up with 20 different toppings to celebrate the regions of Italy. Each topping represents ingredients from that region. Roberto said that he would do ten regions for the spring and summer and the other ten regions for the fall and winter so he could take advantage of the freshest seasonal products. One region would be featured each week and the ones that were the most popular would become part of the regular menu. However there were 11 Pizzas on the list that Roberto gave me.

Roberto invited me to stop by and try them. The day I was there, the pizza was being made by three of the great pizzaioli, Roberto, his daughter Giorgia, a prize winning pizzaiolo in her own right, and Antonio Starita, Roberto’s mentor and owner of Starita a Materdei in Naples which we visited in February.

Here is a description of the 6 pizzas I ate:

I started with Umbria, made with cream black truffle mixed with ricotta cheese, oyster mushrooms, caciotta Umbro cheese, fresh black truffle and prosciutto. I knew there were more pizzas to go but this was so good I ate it all.

Next was Puglia, which was made with fresh basil, stracciatela di bufala, a fresh cheese produced in the province of Foggia , figs, sliced Cerignola olives (olive fritte) topped with grated Tavoliere cheese. I did not finish this one as I had to share it with other guests but it is a great combination of flavors.

Then La Basilicata made with Canestrato di Moliterno, a hard pecorino cheese made from sheep and goat milk in the commune of Moliterno, mozzarella, grilled Sinese bell peppers sautéed with roasted almonds and raisins. It was a good thing more people showed up so I only was able to eat two slices. 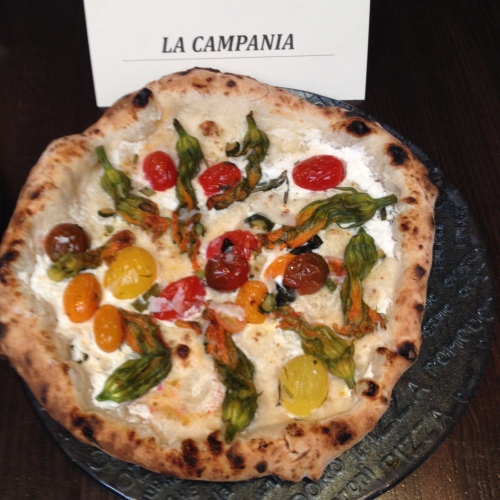 La Campania had ricotta di bufala Campana DOP on the dough, topped with marinated heirloom tomatoes and zucchini flowers. It was finished with grated caciocavallo Sllano, a stretched-curd cheese made from sheep or cows milk produced in the province of Avellino.

La Lombardia was made with stracchino, a cows’ milk cheese, baked on the dough. Then a paste of dried figs, gorgonzola, and raisin was wrapped in slices of bresaola marinated in olive oil and lemon and placed on top with 10 year old Bitto, a DOP cows milk cheese

Roberto said I had to try ay least one more. He brought me La Sicilia, the most complicated. The topping was made of calamari, clams, octopus, tomato sauce, Pachino tomatoes, saffron, salt, pecorino Piacentino di Enna allo zafferano.

What makes these pizzas so special is that the toppings are not just put on the dough but the preparation may take more than a day. Here is the recipe for La Sicilia as Roberto explained it to me:  Boil the Calamari and sauté the clams with olive oil. Sauté separately the tomatoes and octopus and the saffron with cut shrimp and octopus, then mix it all in a bowl and leave for a day to marinate with salt and some olive oil. On the pizza dough, spread the tomato sauce, add baby scallops, add the seafood and put in the oven for a few seconds to warm up the seafood

Roberto invited me back to taste some of the ones that  I missed. The ones I did not taste are the: Il Molise, La Liguria, Emilia-Romagna, Il Veneto and Trentino Alto-Adige. I am looking forward to going back again soon.