Fattoria Fibbiano and Azienda Agricola Sangervasio are two wineries from the hills around Pisa. I had the pleasure of hosting a tasting of these wines at a luncheon at Lupa Restaurant in NYC. Matteo Cantoni from Fibbiano and Luca Tommasini from Sangervasio were present and spoke about their wines. They are very good friends and agree on most aspects of wine making but they do have their differences. Though the two wineries are not far from each other, each has its own microclimate. 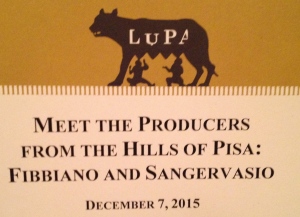 Fattoria Fibbiano is located in the town of Terriccola in the province of Pisa. Matteo said that the identity of this family-run winery “lies in their land. This is why we respect the local wine growing traditions, using only local grape varieties that we tend meticulously to obtain wines of the highest quality.
We maintain a number of manual processes, and treat our soils only with organic, non-chemical substances. Some of the vines are over 100 years old (2.5 hectares) and others are up to 20 years old (12 hectares). 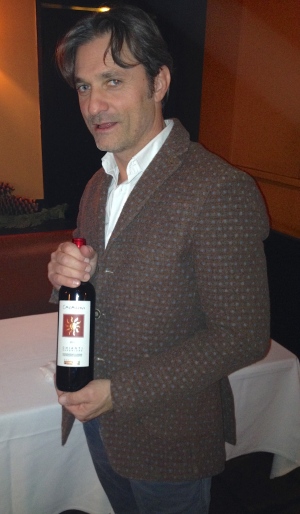 Matteo also said that one couldn’t plan for the future unless one understands what was done in the past. This is a theme I have heard recently from a number of producers and Luca agreed.

Matteo said that Fattoria Fibbiano is also an agriturismo, a working farm that hosts guests.

The Wines of Fattoria Fibbiano 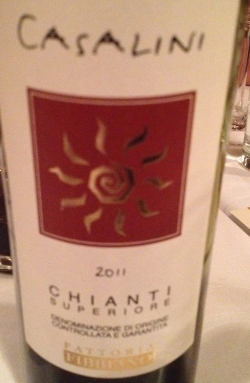 Chianti Superiore “Casalini” 2011 DOCG made from 80% Sangiovese and 20% Ciiliegiolo from the hills around Pisa. The soil is mostly clay. He believes that a “green harvest.” is very important. Harvest is in late September or early October.
The grapes are manually harvested and go through a gentle destemming process. Then they are placed inside specialized stainless steel tanks. In the tanks, the must goes through rotary agitation during the first 7 – 9 days of the fermentation process in order to obtain maximum extraction and separation of seeds to reduce harsher tannins. The must gets fermented by yeast that naturally collects on the grape skins at controlled temperatures and oxygen levels. The wine ages for 8 months in Slavonian oak barrels where malolactic fermentation takes place, and then is placed in bottle for 3 months for refinement. Matteo said that all of his red wines spend time in concrete tanks but he did say for how long. This is an easy drinking wine with aromas and flavors of cherry, raspberry and blackberry. 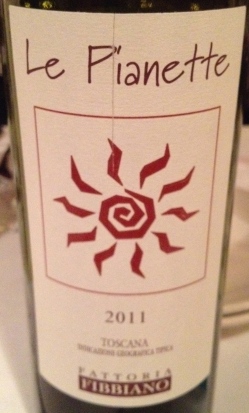 Le Pianett 2011 IGT Toscana made from 70% Sangiovese and 30% Colorino. The wine is aged for 6 months in Slavonian oak barrels and 3 months in bottle before release. The wine has hints of red and black fruit with a hint of spice. 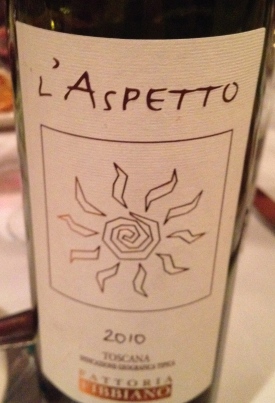 L’Aspetto 2010 IGT made from 50% Sangiovese and 50% Canaiolo. The wine ages for 12 months in tonneaux where malolactic fermentation takes place with an additional 6 months in cement tanks and 6 months in bottle before release. The wine has hints of ripe red fruit, spice and a touch of blackberries. 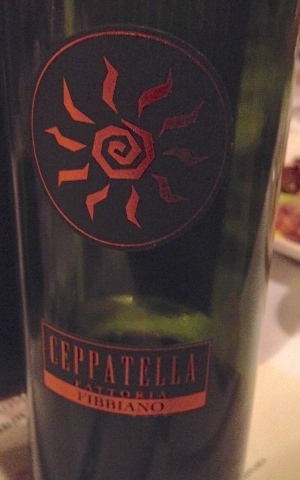 Ceppatella 2009 IGT made from 100% Sangiovese. The harvest is in early October. The wine spends 6 months in tonneaux where malolactic fermentation takes place and 14 months in Salvonian oak barrels and five months in bottle before release. The wine has hints of tobacco, leather, and ripe red fruit.

Some of the vineyards are close to one 100 years old. They have adjusted to the land and have roots that go very deep. New vineyards are planted from the cuttings of the older vineyards. At one time, different varieties were planted in the vineyard so you are not always sure of the blend. 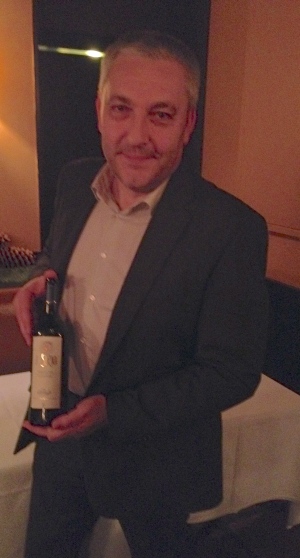 Azienda Agricola Sangervasio is owned by the Tommasini family and Luca is the wine maker. It is in the ancient village of San Gervasio, in the province of Pisa.

Luca Tommasini said the winery is located in the hills of Pisa 25 Km from the Tyrrhenian sea. They are certified organic and follow the philosophy of biodynamic viniculture. The estate is 400 hectares of which 22 hectares are vineyards, at 160/200 meters. The density of vines are 6,000 to 10,000 vines per hectare, there are low yields per plant, organically grown with a technology which respects nature. The wine making process is natural without any chemical additives. Only natural yeast that is on the skins of the grapes is used. Like Matteo, Luca believes that concrete is going to be used by more winemakers in the future.

Luca blends international grapes with native varieties and uses barriques. However, all of the wines show that he knows how to integrate the wine with the barriques so that the aromas and flavors of the grapes dominate. They are also an agriturismo with 12 apartments on the property.

The Wines of Azienda Agricola Sangervasio 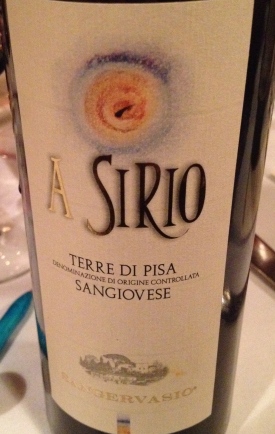 A Sirio 2011 IGT Tuscany 95% Sangiovese and 5% Cabernet Sauvignon The vineyard is at 200 meters. Alcoholic fermentation is with natural yeasts and malolactic fermentation takes place in the same barriques where the wine is aged. Aging is for 14 months in barriques and at least 18 months in bottle before release. The wine is named after Luca’s grandfather. The wine has hints of red and black berries with a touch of spice. 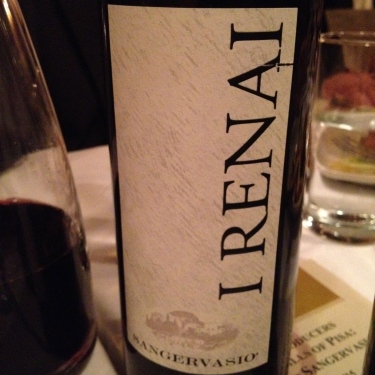 I Renai 2008 100% Merlot Toscana Rosso IGT  Harvest is by hand the last week of August, and there are 10,000 plants per hectare. Alcoholic fermentation is in concrete tanks with natural yeasts. Malolactic fermentation is in the same barriques where the wine has been aged. The wine ages for 14 months in new 225-liter barriques and spends at least 18 months in barrel before release. The wine has aromas and flavors of blackberry and cherry with a touch of spice. 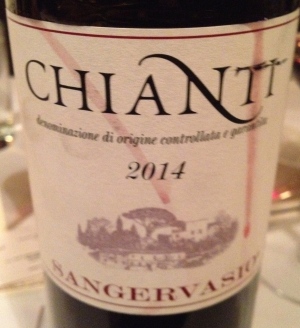 Chianti 2014 DOCG 100% Sangiovese There are 6,000/10,000 plants per hectare. Harvest is by hand the 3rd week of September. Fermentation with natural yeasts in temperature controlled concrete tanks. It is aged 6 months in concrete tanks and 4 months in bottle before release. The wine has  hints  of wild berries with a touch violets, and good minerality. 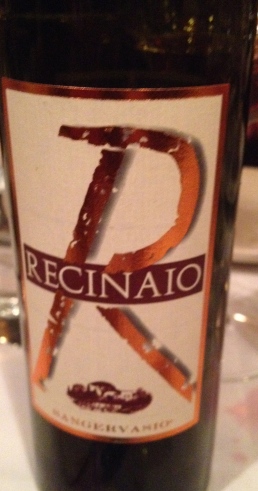 Recinaio 2004 DOC Etruria Central, Vin Santo made from 70% Sangiovese, 15% San Colombano and15% Sangiovese from 35 year old vines. There are 3,000 vines per hectare. Harvest takes place the first week of October. The grapes dehydrate naturally until February and are manually pressed, fermentation is in new 112 liter barrels and it is aged for 8 years in the barrel and rests for 12 months in a temperature controlled environment before release. This is a subtle dessert wine with flavors and aromas of figs, almonds and honey. I could not stop drinking the wine with biscotti.