The Unique Red Grapes of Campania

The Campania region of Italy has some unique red grape varieties. The ancient Greeks originally brought many of these varieties while others that were thought lost during the phylloxera epidemic have been rediscovered. There is one that no one knows where it originated. These grapes make for very interesting wines

At a recent tasting of the Wine Media Guild held at Felidia Restaurant, we tasted some examples of the red wines of Campania:

Piedirosso: “The name… translates as “red foot” and the grape is also known as Palombina or Pre’e Palummo meaning respectively little dove and dove’s foot in dialect, the latter because of its red-colored triple-branched stem like a three-taloned bird’s foot,” according to Nicholas Belfage in his book Brunello to Zibibbo. Piedirosso is an ancient black skinned grape that does well in volcanic soil. It may be identical to the Colombina, the grape that Pliny the Elder (d. 79 AD) mentions in his Natural History. 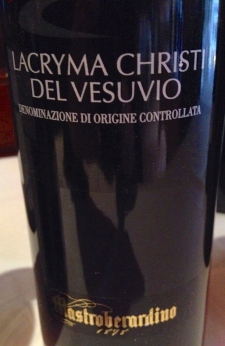 Lacrima Christi del Vesuvio (tears of Christ) Rosso DOC 2013 Mastroberardino Piedirosso 100%. Volcanic loose soil very rich in minerals and the exposure is south – east. The vineyard is at 70 m above sea level and there are about 3,000 plants per hectare. The training system is radical back with guyot pruning and the average age of the vines is 15 years. Harvest takes place in mid-October. Classic red vinification is in steel tanks at a controlled temperature. The wine remains in the bottle for one month before release. The wine has hints of cherry, plum, cloves and a touch of smoke. $20 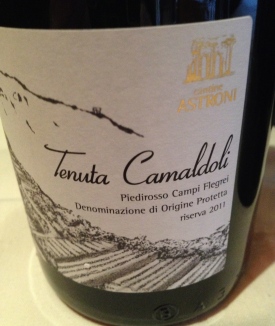 Piedrosso Campo Flegrei Riserva “Tenuta Camaldoli” DOC 2011 Cantine Astroni 100% Piedirosso The winery is located in Campi Flegrei west of Naples. The bunches were destemmed by hand to avoid any possible greenness in the wine. A small quantity of juice and skins was put into an open top tronconic cherrywood cask where it was fermented by indigenous yeast. The wine was treated as gently as possible, and only punching down was used for extraction. After the fermentation had finished, the wine remained for an extraordinarily long time on the skins, some 65 days in total, in order to extract all the tannins from the skins. The wine went through malolactic fermentation, which happened by itself, and was racked off in a small stainless steel tank where it stayed for a month. 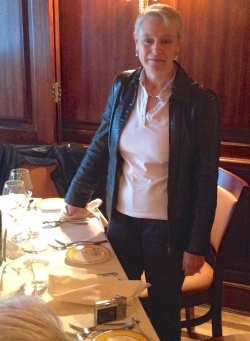 The wine was bottled unfiltered. Only 1100 bottles produced.  This is the first Piedirosso riserva that I have tasted. This is a very elegant Piedrosso, well balanced and smooth with hints of black and red berries with a nice finish and long aftertaste.    The winery notes indicate that Piedirosso is “planted throughout Campania… the Piedirosso Beneventano and the Piedirosso Avellinese are completely separate varieties.” They do not specify which one is in the wine. $27 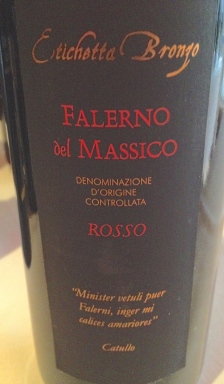 Falerno del Massico “Etichetta Bronzo DOC 2006   Masseria Felicia Made from 80% Aliganico and 20% Piedirosso. The winery is located at the foot of Mount Massico, Sessa Aurunca. The vineyards are at 200 meters and the soil is gray tuff, pumice and ash. The training system is guyot. Fermentation is in open conical chestnut barrels. Aging is in barriques for 12/14 months and 12 months in bottle before release. The wine has hints of cherry, plum and other red and black fruits with a touch of tobacco and oak. $50 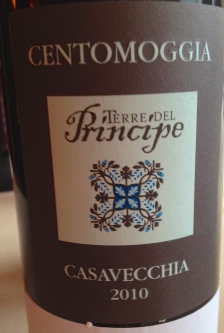 Cassavecchia (old house) The origin of the cassvecchia vine is completely unknown. Legend has it that farmers found an old vine, which had survived phylloxera. It was rediscovered among ancient ruins in Pontelatone inside the remains of a walled garden near the via Latina, the ancient road which connected Capua with Alife. The vine that was found had a trunk 40 centimeters across and cuttings were taken from it and replanted.

Casavecchia “Centomoggia” 2010 Terre del Principe made from 100% Casavecchia. A “moggia” was a unit of measure for property in this area that historically had very small plots. In fact, a property measuring 100 moggia, or about 74 acres, was such a rarity that this place, located between Caiazzo and Castel Campagnano, was named Centomoggia, meaning one hundred moggia. The vineyards are located in Castel Campagnano, Pontelatone and Castel di Sasso, the exposure is northwest for the former and southeast for the latter two. Elevation is 985 ft. and the training system is guyot. Total acres of vines is 24. These are very old vines planted between 1912 and 1932 and the soil is clayey and skeletal. Harvesting is by hand and the grapes undergo a berry selection at the winery before a prolonged maceration and fermentation at a controlled temperature using native yeasts. Aging takes place in new 225liter French oak barrels for 12 months and one year in bottle before release. The wine has hints of blackberry, spice, liquorice and a touch of cloves $40 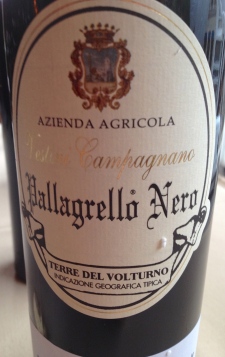 Pallagrello Nero: This grape variety is grown almost exclusively in Campania particularly in the province of Caserta. It was a favorite of Ferdinand lV the Bourbon King of Naples and Sicily. Pallagrello was believed to have been destroyed by phylloxera but was rediscovered in the 1990’s and has been replanted by a few wineries. It is not a color mutation of Pallagrello Bianco.

Terre del Volturbo IGT Vestini Campagnano made from 100% Pallagrello Nero. The winery is located in hills in the province of Caseta. The vines are at 250 meters. Classic vinification is in oak barrels. There is a short maceration period. The wine is aged for 18 months in new barriques and 3 months in bottle before release. The wine has aromas and flavors of black fruit with hints of plum, oak and vanilla. $50 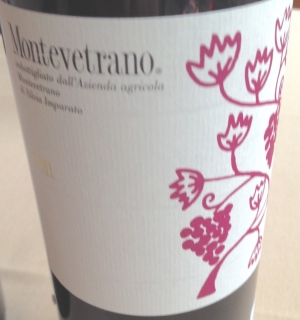 Montevetrano Colle di Salerno 2011 Montevetrano Silvia Imparato. The enologist is Ricardo Cotarella. The wine is made from 60% Cabernet Sauvignon, 30% Merlot and 10% Aglianico. The winery is located in the municipality of San Cipriano Picentino near Salerno. The vineyards are 100% meters above sea level. There are 12 acres of vines and the harvest is by hand from the end of September to the beginning of October. Fermentation is in stainless steel tanks for about 15 days and the wine is aged in new barriques for 10 to 12 months. This is a wine with hints of violet, blackberries, cherry, tobacco and chocolate. The wine did not have the strong aroma and flavors of vanilla and oak, which were present in past vintages. $60 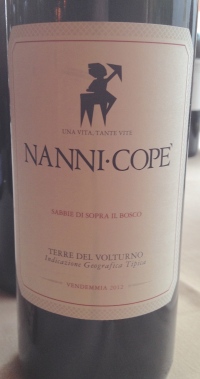 Terre del Volurno IGT “Sappie di Sopara il Bosco” 2012 Nanni Copè, made from 90% Pallagrello Nero 5% Aglianico (clone VCR 23) and 5% Cassavecchia. The grapes are from a 2.5-hectare vineyard of the same name. The soil is mostly sandy with silt and clay. There are 1,750 vines per hectare and the vines are 30 years old. Organic farming methods are used but the winery is not certified organic. Only fully matured grapes are harvested by hand. The wine is fermented in stainless steel with natural yeast and the grape varieties are fermented together. Maceration lasts for 16/19 days and malolatic fermentation takes place in 500 liter barrels.The wine is aged 1/4 in new oak, 1/4 in second passage, 1/4 in third passage and 1/4 in bottles. The wine remains here for one year and then all the wine is aged in bottle for another for 8 months before release.

This is a wine with good fruit, hints of cherry and spice, good acidity and a long finish. The owner of the winery is Giovanni Ascine and his childhood nickname, Nanni Copè, gives the wine its name. $40