Two wines made from the same grape by the same producer that are so different in style is uncommon.  It is even more unusual when the grape is Pinot Grigio.

Alessandro Lunardi, the representative in America for the wines of Marchesi de Frascaboldi, invited me to a tasting that he was conducting on these wines. I expected all of the wines would be from Tuscany but it seems that the company is involved with wineries in other parts of Italy.

The producer of the Pinot Grigio is Attems in Friuli-Venezia Gulia and the estate is located in Lucinico in the Gorizia area of the Collio. The Collio Goriziano comprises a series of descending slopes (from which it derives its name) facing south, protected on the north by the Julian Pre-Alps, which act as a barrier to the cold north winds.

2010 was a very good vintage for white wine in Friuli.  The Pinot Grigio grapes for the wines come from the area between the Collio and the alluvial area of the Isonzo. This wine is fermented in stainless steel and barriques. Fermentation takes place for 15 days. There is no skin contact and malolatic fermentation does not take place. It is a crisp wine with floral notes, fruity with hints of apple and pear. $19

This wine goes back to the way Pinot Grigio was made during the time of the Republic of Venice. Ramato, meaning copper,  was the term used to describe the color of the wine. Some clones of Pinot Grigio can also be copper in color. The traditional vinification process led to the use of this name. The must remains in contact with the skins for 36 hours and this gives the wine a very distinctive coppery hue. The term “orange wine” is used to describe white wine where the juice has had skin contact.

The harvest took place near the end of September and the grapes were harvested by hand. Vinification in stainless steel vats at a controlled temperature. Fermentation lasted for seven days. For this wine the skins remained in contact with the juice for 12 hours and the wine did not undergo malolatic fermentation. The wine is aged for four months in barriques and two months in stainless steel and one month in bottle before release. It has the color of a blush wine. The aroma is very aromatic with hints of strawberry and cherry. It is quite firm on the pallet with a nice fruit in the finish and aftertaste. It is a most interesting wine! $19 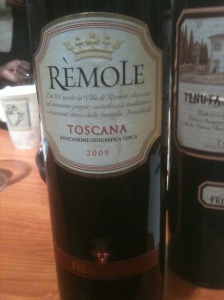 The wine is mostly Sangiovese with a small amount of Cabernet Sauvignon. Alessandro pointed out that the wine that goes to make Remole comes from the Frescobaldi vineyards in central Toscana. It is the wine that is not selected to go into the estate wine. There is a second selection when the wine from the different vineyards is going to be blended together to make the estate wine. Alessandro said that all the grapes used in the Remole are from the estate vineyards and it was a bargain at $10.  I had to agree.  Fermentation takes place in stainless steel tanks for 10 days and maceration for seven days. It is aged in stainless steel for five months and 2 months in bottle before release. This is a wine with fresh red fruit flavors and aromas that should be drunk young.

Made from 90% Sangiovese and 10% from grapes such as: Malvasia Nera, Colorino, Merlot and Cabernet Sauvignon.  2007 was a very good vintage in Tuscany. The estate lies in heart of the Chianti Ruffina area, covering 626 hectares at elevations between 250 and 400 meters. The soil is rich in clay and limestone. They use the “Nipozzano clone” of Sangiovese. Nipozzano means “no well” and they do dry farming and by law can only irrigate in an emergency. Fermentation takes place in stainless steel for 13 days and each variety is fermented separately. Maceration takes place for 25 days. Alessandro said that the wine is aged partly in two and three year old barriques and partly in large barrels 30 to 50 HL for a total of 24 months and three months in bottle before release. The wine tastes like Chianti with aromas and flavors of blackberries, blueberries and hint of pine and violets and good acidity. It is a wine that will age. This is an exceptional wine given the fact that 1,000,000 bottles are produced and it sells for $22 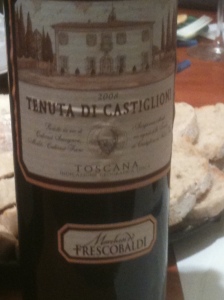 Made from 50% Cabernet Sauvignon, 30% Merlot, 10% Cabernet Franc and 10% Sangiovese. The Castiglione estate lies at an elevation of 200 to 250 meters and is composed of 513 hectares in the Chianti Colli Fiorentini zone in the Montespertoli area. It is the oldest Frescobaldi estate. The soil is composed mostly clay and sand. Fermentation takes place for 10 days and the wine is aged in barriques for 12 months and in bottle for two months before release. This was a little more modern in style than the other wines with a deeper color and aromas and flavors of mature black cherry and plum. $25

A few days later the American Institute of Food and Wine was doing a seminar and tasting with the title- Olive Oil: Complexities and Clarifications. Among the panelists were Loius Coluccio of Coluccio and Sons Inc. and Michele Scicolone author of The Italian Slow Cooker. We tasted eight olive oils from different countries and the best one in my opinion was the Marchesi de  Frescobaldi “Laudemio” (Tuscany) made from Frantoio, Moraiolo and Leccino olives. $38