Every time we go to Italy I always find something new and exciting. This time it was the Monte di Grazia winery in Tramonti high above the Amalfi Coast.  Giocondo Cavliere, the Slow Food representative in the area was our guide.

It was raining as we made our way to the winery and when I saw the hillside vineyards I was taken by surprise. The vines were very old; in fact I have never seen a vineyard with such old vines that were still producing.  Some were over 100 years old and most of the others seemed to be more than 50 years old. They were all ungrafted, meaning that they were on their own root stock. Since old vines produce fewer grapes, yields can become very low and this is the reason that most vineyards are replanted.  It seemed that the vines were never affected by phyloxera.  The organic methods used at Monte de Grazie also further limit the yields. The vines were planted in the tendone method. This is the traditional method for planting vines in Southern Italy. The leaves are trained to form a canopy that protects the grapes from the sun.  It is like a pergola with an overhead trellis from which the grapes hang down.  In one of the vineyards an old vine looked like it was holding up the whole tendone.  The poles that hold up the tendone are made of chestnut wood from trees in the nearby hills and the vine “branches” are attached to the tendone by willow shoots. All the grapes are picked by hand. 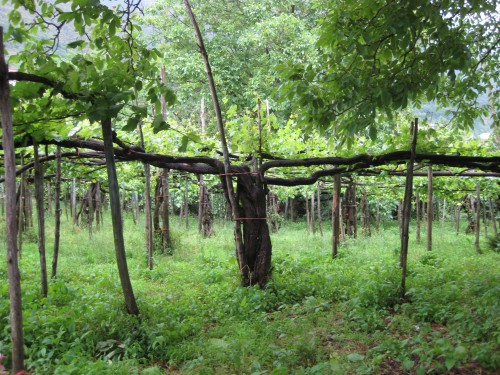 We were introduced to Dr Alfonso Arpino, the owner of the winery. He took us for a tour of the winery. It was a short tour because it was the smallest winery I have ever been in.

He said that he had 2.7 hectares in four vineyards, the highest being almost 500m above sea level with a unique micro climate. The winery is very close to the town of Amalfi but way above it. His family has owned vineyards as long as he could remember but always rented them out. In the early 1990’s he decided to make wine as a hobby and soon it became a passion. Dr..Arpino has a young wine consultant that wanted to put the wine in barriques but he said no. All of his wines are fermented and aged in stainless steel. The different vineyards are vinified separately and malolatic fermentation is hoped for but does not always happen. Sulphur is never added to the wine. He makes only three wines and the total production is less than 6,000 bottles. 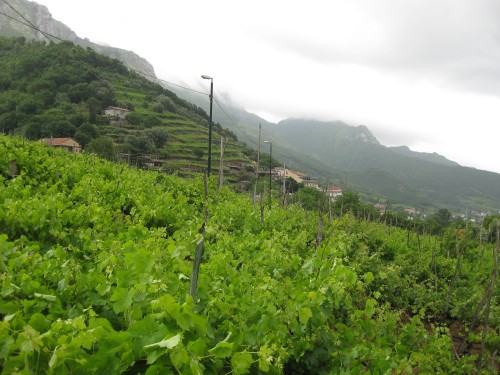 The white is wine is called Monte di Grazia Bianco and is made from the following local grapes:

Pepella  which,has only a few large grapes on the bunch, the rest being the size of peppercorns, though they all ripen at the same time.

Ginestra, the name comes from the yellow-green color which is similar in color to the gorse flower.

The Bianco had hints of citrus with undertones of pear and almond, a very nice mineral character and good acidity. I was so impressed that I stopped tasting the wine and began to drink it and I never drink wine without food. Dr Arpino was very pleased.

The red grape is the Tintore di Tramonti. It is grown almost exclusively in the Monte Lattari Valley. The grape is harvested at the end of September which makes it an early ripener for this area. This indigenous red grape variety belongs to the Tienturier family.  Tienturier means dyed or stained in French. The flesh and the juice of these grapes are red in color. The anthocyanin pigments accumulate in the grape berry itself. The free run juice is therefore red.

Tramonti is one of the three sub-zones of the Costa d’Amalfi, the other two are Ravello and Furore. The Tintore grape is mentioned in the regulations but it is used as a blending grape. The Tramonti area has been neglected for the most part and therefore a wine made from mostly Tintore would be IGT. Monte di Grazia Rosso is IGT Campania as is the bianco and rosato

Monte di Grazia Rosato- made from 70% tintore grapes which have dark pink juice (hence its name) and 30% moscio, even more obscure than the tintore, an ancient red variety from Campania. I did not know about the existence of this grape variety.

Dr Arpino said that he introduced rosato wine with the moscio grape in the Campania region. The region was in the processes of considering it in the catalogue or list of grapes unique to the Campania region but he is still waiting for their decision.

As far as he knows the moscio grape only exists  in Tramonti.

This grape also has pink juice, though not as dark as the juice from the tintore, and with a more delicate skin. There was no skin contact in the making of this rosato, just the juice from these two grapes to get a dark rose wine with good fruit and hints of strawberries and blueberries. It had good mineral character and acidity with a dry finish and aftertaste. It was one of the best rosato wines I have tasted from Italy.

The 2005 was drinking very well with red fruit, hints of black pepper and spice. It had a long finish with a great aftertaste of red fruit and black pepper. The 2006 was very different with more earthy aromas, fruit and only the slightest hint of black pepper.  It needed more time to develop. The 2007 had the same characteristics as the 2005 only less developed. These wines have the qualities that ensure they will last for a long time.  All of the wines had very good acidity so they are perfect with food. 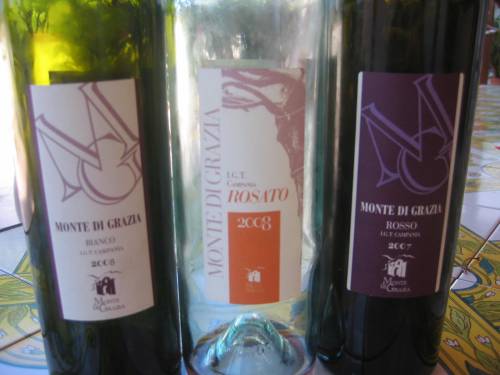 The Monte di Grazia wines are only available in this country at Balthazar in Soho.