New York City winters can be brutal, and this one was no exception.  Michele and I wanted to get away, but where to go?  Florida, Mexico, the Caribbean? We have tried them all and found them lacking. Not because of the weather, which was great, but lacking because of the food and wine! So we decided to go where the weather would be better than in NYC and still find great food and wine:  Naples and Rome.

Naples is the most unique of the Italian cities.  It is like one big street fair, there is so much going on all the time. Naples also has a natural beauty.   Mt.Vesuvius and the Bay of Naples are breathtaking.  The Neapolitans are theatrical and dramatic, and of course there is the food. The best pizza is Neapolitan pizza and the best place to have it is, of course, Naples.

It was a beautiful sunny day when we arrived and we decided to go for pizza by the waterfront.  One cannot think of Naples without thinking of pizza. 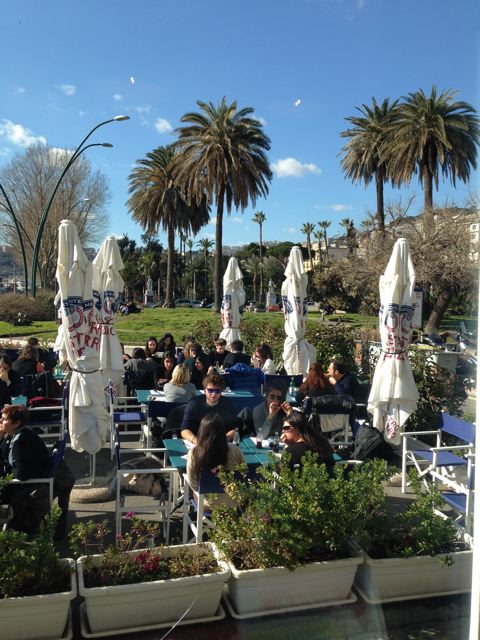 We went to Gino Sorbillo-AKA Lievito Madre al Mare, they have 3 locations in Naples.  This one is on Via Partenope overlooking the Bay of Naples. They have a large outside dining area and it was very crowded, everyone wanted to sit outside.  Here is a sample of the menu:

A big trend in Naples is for the pizzerias to list the source for their ingredients, many of which are organic and artisanally made.  On the menu, a green leaf  showed that the product was Biologica and a snail if it was recognized by “Slow Food”.

Michele had the MargheriTTa Gialla Massimo Bottura, made with tiny yellow tomatoes and bufala milk cheese. These deep yellow tomatoes had a honey-like flavor and were among the sweetest I have ever tasted. 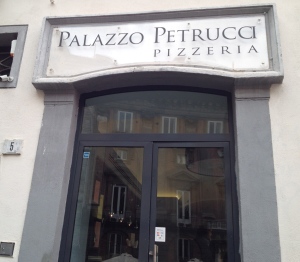 The next day on the way back from our tour of Naples Underground we stopped at Palazzo Petrucci Pizzeria- San Domenico Maggiore Piazza. They also give the source of the products they use and even the name of their pizzaiolo, Maestro Michele Leo, is listed on the menu.  Next door, they also have an elegant Michelin-starred restaurant, which we did not visit.

This place was recommended by Maurizio de Rosa, who was born in Naples and is a partner in Prova Pizzeria in NYC.

Michele had a pizza Margherita and I had a fried pizza stuffed with ricotta and cicoli, which are the little crispy bits left after rendering out the lard from pork fat.

Before we left NYC we went to Don Antonia by Starita and spoke with Roberto Caporuscio, the owner and pizzaiolo. We have known Roberto for a number of years ever since he opened Keste. Roberto said we must go to Pizzeria Starita a Materdei dal 1901.  The owner, Antonio Starita is his mentor and partner in the New York restaurant.

Our friend food writer Arthur Schwartz, who spends part of each year in Salerno, decided to come to Naples to join us. It turned out there were five of us, Arthur, his partner Bob Harned, and their friend Contessa Cecilia, who drove.

We ordered fried zucchini flowers, arancini and potato croquettes to start. Then we had Pizza Maradona, a fried rolled stuffed pizza, Pizza Mastanicola topped with lard, basil and pecorino, and a Sorrentina pizza made with sliced lemons and provola cheese.

We arrived at 12:30 and when we left there was a long line waiting for a table even though this is a large place.

50 Kalò di Ciro Salvo , Piazza Sannazzaro 201/B. This is the hottest pizza place in Naples right now, the one everyone is talking about.  The pizzaiolo, Ciro Salvo has researched pizza making techniques and insists on a very long slow rise for his dough which results in a tender and more digestible crust.  He uses only the finest ingredients for his toppings.  In Greek, the name Kalo means beautiful and good.

We started with a few fried foods, potato croquettes and frittatine, cheesy pasta shaped into disks and fried, which were excellent.  Then we had a Pizza Margherita and Pizza Porcini with sausages. 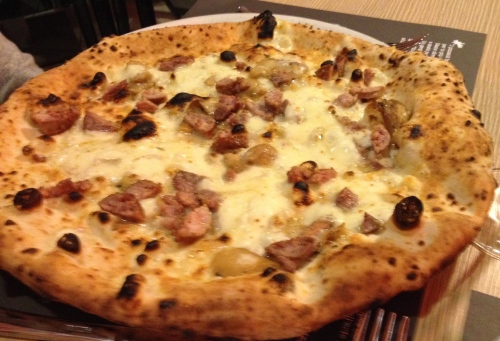 If you go here for dinner, it is best to get there early. It is a big place but if you arrive after 8:00 PM you will wait on a long line to get in.

For the most part the Neapolitans  drink, beer, soda and acqua minerale with their pizza.The wine lists at the pizza places are  for the most part short and the price for a  bottle of wine produced in Campania  is about 18 to 20 euros, about what you would pay retail in the US for the same wine. Among the wines we drank which went very well with where a Coda di Volpe “Amineo” 2013 Cantina del Taburno, Lettere della Penisola Sorrentina 2013  Grotta del Sole, a red sparkling wine and Falanghina Sant’ Agata Dei Gotti 2013 Mustilli.

Tagged as Pizza in Naples