The Wines of Paolo and Noemia D’Amico

When I was planning my last trip to Rome, Tony Di Dio of  Tony Di Dio Selections suggested that I visit the Paolo E Noemia D’Amico Winery since it is only an hour and fifteen minute drive from Rome.  But the weather is Rome this February was rainy, cold, and one day it even snowed, so we never made arrangements to go to the winery.

When we returned home Tony invited me to a lunch at Il Gattopardo Restaurant with the wines of D’Amico.  The speakers were Paolo D’Amico, Chairman of the winery, and the agronomist and enologist Guillaume Gelly.

Paolo said he comes from a ship owning family but always had a passion for wine and wine making. His wife, Noemia, was born in Rio de Janeiro but her family is originally from Porto in Portugal. She worked for Maison Christian Dior for ten years. Noemia shared the same passion as Paolo for wine.  Paolo said that he and Noemia founded the winery in 1985 with just 5 hectares and today they have 35 hectares of vineyards.

The wine cellars are located in Vaiano, Castiglione in Teverine (VT) near the unique town of Civita di Bagnoregio, in a part of Lazio that overlaps Umbria. Paolo said the estate dates from the 16th century.

Guillaume spoke about the wines. He said the wines are influenced by the ancient volcanic soil of Vaiano and this is why the wines have very nice minerality. The cellar is carved from the local volcanic tufa rock.

Paolo referred to the cellar as a library designed by his wife and the architect Luca Brasini where the finished wines are stored to the sound of classical music. The cellar is under hanging gardens decorated with modern sculptures from different eras. There is also a tower on the property which dates from the 13th Century called “Torre del Sole” that was built on Roman foundations.  Paolo showed a video of the estate and it was very impressive. Next time I am in Rome I will make arrangements to visit.

Noe DPO 2016 Orvieto made from Grecgetto, Trebbiano and Pinot Grigio. The vineyards are located in Umbria on the border between Tuscany and northern Lazio at 480 meters. The wine is fermented in temperature controlled stainless steel tanks and malolactic fermentation does not take place. The wine is aged in stainless steel for 5 months. After about 1 month in bottle the wine is released for sale. This is a balanced fruity wine with aromas and flavors of citrus fruit, good acidity and nice minerality. Gauillaume said the name of the wine comes from part of Paolo’s wife’s name Noemia.

Calvanchi Di Vaiano IGP Lazio 2015 made from 100% Chardonnay. Guillaume said this wine and the Falesia come from the same vineyard. The difference is in how they are vinified. Fermentation is in temperature controlled stainless steel tanks. The wine does undergo malolatic fermentation. The wine is aged for 8 months in stainless steel tanks and 3 months in bottle before release. This is an elegant, full-bodied wine with aromas and flavors of citrus fruit and a hint of apricot and good minerality. I asked Guillaume how he was able to make a wine with so much body and flavor without oak and malolactic fermentation. He said the wine was on the lees for a long period of time and this is what gives the wine its character. This is an excellent food friendly wine.

Falesia IGP Lazio 2016 made from 100% Chardonnay. This wine is fermented in French barriques and undergoes malolactic fermentation. It spends a long time on the lees. Then the wine is aged for 10 months in new and used barriques and five months in barrel before release. This is an intense and complex wine with hints of ripe fruit and touches of honey, butter and almonds. 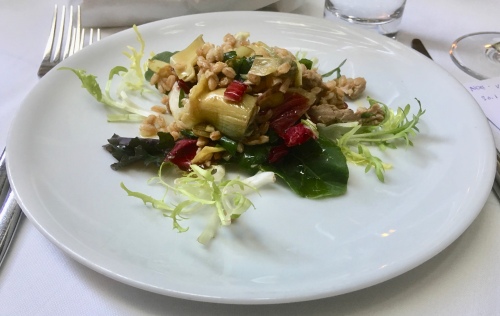 With the two Chardonnays we had organic farro salad with poached fresh tuna, sautéed artichokes and baby kale. 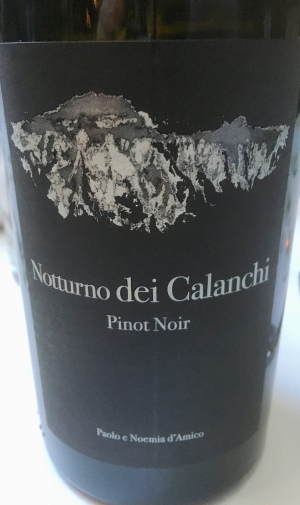 “Notturo dei Calanchi” 2012 PGI Umbria 100% Pinot Noir from a two hectare vineyard at 550 meters. Cold maceration lasts for 5 days. The wine is aged for 10 months in French barriques, 30% new and 70% used and another 10 months in bottle before release. This is an elegant fruit forward wine with hints of red fruit, a touch of cherry, and violets. I was very impressed by this wine. Guillaume mentioned that the winery overlooks the Calanchi Valley.

“Atlante” Cabernet Franc 2012 PGI Umbria made from 100% Cabernet Franc. The vineyard has a southern exposure and the grapes are hand harvested in October. Fermentation is in temperature controlled stainless steel tanks for 20 days. The wine is aged in French barriques for 10 months 70% new and 30 % used and 10 more months in bottle before release. This is an intense complex wine with hints of black fruit, cinnamon and spice. It has a very long finish.

It was a perfect combination with the pan-seared veal loin scented with fresh thyme, served with fingerling potatoes and porcini mushrooms.

For pictures of the estate and the library(cellar) visit their web-site www.paoloenoemiadamico.it