Last week I posted an article on the white wines of Italy represented by Riccardo Gabriele of PR Comunicare Il Vino and Luca Tommasini of WinesCom Global Consulting. This article is about the red wines we tasted at Il Gattopardo. 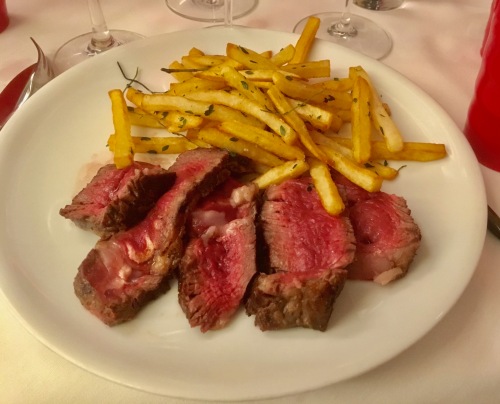 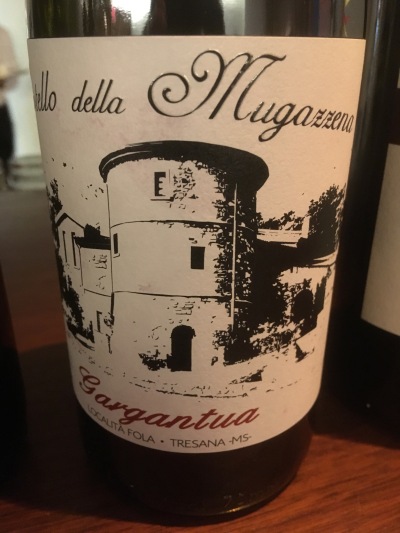 Castello di Mugazzena “Gargatura” IGT Tuscana 2017 made from 100% Syrah. The soil is clayey sandy terraced alluvial deposits. Training system is unilateral spurred cordon. Manual harvest. Grapes are destemmed and sorted. The grapes are pressed and then pumped into conditioned steel tanks where it ferments at a controlled temperature. There is pumping over, punching down and delestages. At the end of the alcoholic fermentation the wine is left to mature in contact with the skins between 10 and 30 days. The wine is separated from the marc and it is pressed. Malolactic fermentation is complete two weeks after. The course lees are removed and the wine is pumped into into French oak barrels, where it ages on the lees fro 12 to 18 months. The wine has hints of blueberries, black cherry and a note of black pepper.

Barone Sergio Sicilia Nero d’Avola Rosato “Luigia” 2018 made from100% Nero d’ Avola the vines are 10 years old and are at 70 meters. Fermentation takes place without the skins. Fermentation is in stainless steel tanks at a controlled temperature. The wine matures in steel for 6 to 7 months and in bottle for 2 months before release. The wine has hints of strawberry and cherry with a touch of raspberry. Next time the red wines 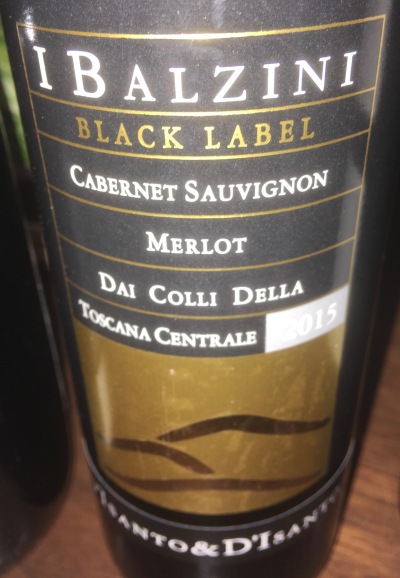 I Balzini Black Label Dal Colli Della Tuscana Centrale PGI 2013 (WinesCom) made from Cabernet Sauvignon and Merlot. The soil is of Pilocene orgin, sedimentary formations characterized by the presence of alternating strata of yellow sands and clay with a notable presence of marine fossils. Exposure is southwest with a north to south orientation of the rows. Working of the soil with a cordon de Royat training system. Manual harvest and grape selection. There is two weeks of skin contact and there is a complete malolactic fermentation. Aging is in French oak barrels for 12 to 14 months and 18 months in bottle before release. This is a wine with hints of red and black berries, a hint a spice and a touch of vanilla

Brunello di Montalcino DOCG 2015 “Canalicchio,” Franco Pacenti WinesCom made from 100% Sangiovese Grosso. The vineyards are at 300 meters and the exposure is north-east. The soil is medium clay with a low density of vines per hectare, divided into six plots with an average age of 25 years and the training system is spurred cordon. . There is a strictly traditional vinification with prolonged maceration on the skins and long refinement in medium to large oak barrels. The wine has hints of cherries and mushrooms with a touch of spice and a hint of herbs. 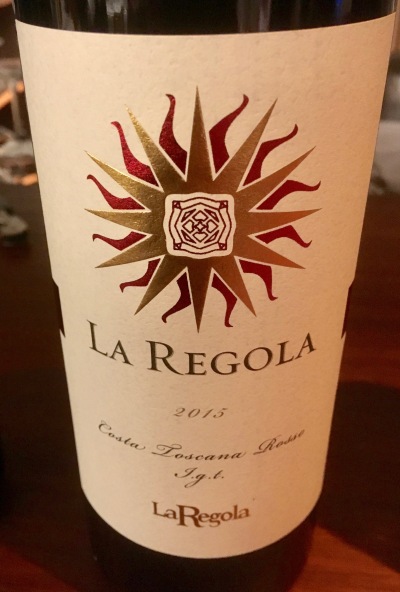 La Regola Costa Tuscana Riserva IGT La Regola made from 100% Cabernet Franc. Red Mediterranean soil with an abundance of stones. The vineyards are at 150 to 200 meters. Hand havesting of grapes with a careful selection. Manual selection of the grapes and of the berries, medium maceration and alcoholic fermentation is in natural concrete vats at a controlled temperature. After malolactic fermentation the wine spends 18 months in new French barriques made in Burgundy and at least 12 months in bottle before release.This is a fruit forward wine characteristic of Cabernet Franc with a hint of spice and vanilla.

Barolo DOCG “Ravera” 2013 Giovanni Abrigo made from 100% Nebbiolo. The soil is Tortonian in origin, made up of laminated Saint’Agata fossil marl, with clay at 400 meters. The exposure is southeast and there are 4,500 plants per hectare. The training system is espalier in the vineyards with guyot pruning. The age of the vines is between 20 and 30 years. Harvest is by hand in mid October. Separate processing of grapes picked in different parts of the vineyard. Destemming and temperature controlled alcoholic fermentation in steel tanks, pumping over and toward the end of the fermentation-delestage. The duration of the submerged cap depends of on the quality of the vintage. Drawing off and spontaneous malolactic fermentation in stainless steel tanks. The wine is aged for 38 months of which at least 18 months is in French oak barrels of varying capacity. Blending is in stainless steel tanks and the wine is bottled in the summer and released for sale in January four years from the harvest. This is a classic Barolo with hints of cherry, tar and licorice.

Beconcini “IXE”  The name is the Tuscan pronunciation for the letter X. The letter X stands for unknown vines. In the early 1950’s, 213 vines of unknown species were found in the vineyard which were called X vines. With help from the Ministry of Agriculture these vines were declared to be Tempranillo a few years ago. In June of 2009, Tempranillo was enrolled in the Tuscan register. As far as I know Tempranillo was never cultivated before in Italy.

The IGT is Tuscany Tempranillo. This wine is made from 99.9% of Tempranillo and a touch of Sangiovese. The winery is located in the town of San Miniato. The vineyard is 3.5 hectares and the grapes are all from the new vineyards planted in 1997 using a massal selection from buds taken from the century old vines of Tempranillo from the Vigna alle Nicchie. The training is spurred cordon. Soil is sandstone with marine fossil formation, well integrated with abundant clay. 100/150 meters above sea level and there are 7,000 vines per hectare. Harvest the first 10 days of September. The grapes are dried for 4 weeks and they obtain a total yield of 70%. Fermentation takes place in temperature controlled glass lined cement vats, maceration is for 3 weeks. Aging lasts for 14 months in 70% French barriques and 30% American oak barriques of second passage. 6 months in bottle before release. First passage in barriques is for the wine from the grapes of the historical vineyard Vigna alle Nicchie that goes into the wine of the same name.

This origin of this grape variety is not known for certain. Via Franchigena was an old Roman road, which was used by pilgrims in the 17th century to make the pilgrimage to and from Santiago de Compostela (Rioja) in Spain to Rome. This road passed close to the town of San Miniato near where the winery is now located. Spanish pilgrims may have carried the Tempranillo seeds and actually sowed them in the vicinity of San Miniato as was the custom of the time. Scientists have determined that the vines were from seeds, not cuttings. Legend has it that a local priest tended the vines not knowing their origin. Not imported.

Montefalco Sagrantino 2015 Bocale made from 100% Sagrantino. The vineyard is treated with natural grass regeneration techniques (land planting), using only organic and mineral fertilizers without the use of chemical products or herbicides. Fermentation is with natural yeasts and the wine is produced without microfiltration and thermal stabilization. Manual harvest takes place the second half of October. Vinification: maceration for at least 40 days with natural enzymes. Stabilization and filtration do not take place. The wine is aged in 1,000 liter French oak barrels for 24 months and in bottle for 12 months before release. The wine has hints of blackberries and currants with a touch of spice. I was very impressed with this wine.

Tommasi Amarone Classico 2009 made from 50% Corvina, 20% Corvinone, 25% Rondinella and 5% Molinara. The vines are on hillside terraces; the training system is high-density guyot. The Groletta and Conca d’Oro vineyards are located in the area of classic historical Valpolicella. The grapes are hand harvested and placed in plastic boxes which hold 5/6 kg. Then they are put on wooden racks to dry where cooling breezes in the autumn and winter until January dry them. This drying period is known as the appassimento. Annalisa said that this is an active period where the grapes lose about 50% of their weight and there is a concentration of the natural sugar. The wine is aged for 3 years in large Slavonian oak barrels. Residual sugar is 8g/l and the alcohol is 15.50%. This is a elegant, complex and full-bodied wine that has aromas of ripe fruit with hints of cherries, dries figs, prunes and a touch of hazelnut.

Last month when I was in Florence, I met with Riccardo Gabriele of PR Comunicare Il Vino. I tasted a number of wines that Riccardo represents and enjoyed them all. Riccardo told me he would be in NYC in two weeks to present a tasting of more of his wines at ll Gattopardo, along with Luca Tommasini of WinesCom Global Consulting.

I had met Luca previously when I hosted a tasting and lunch featuring his winery Azienda Agricola Sangervasio.

At the Il Gattopardo tasting, there were: 4 whites, 1 rosato and and a number of reds.

Here are the first five wines wines and what we ate with them. 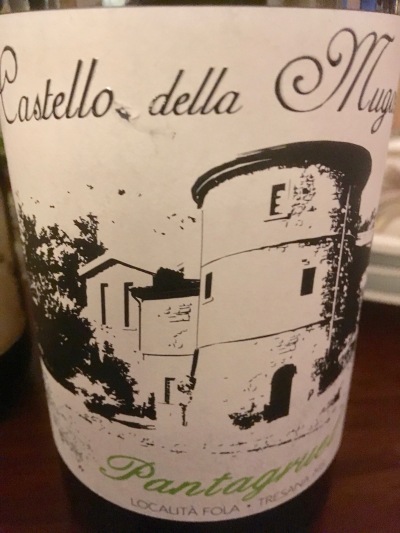 Vermentino IGT Toscana 2018 Castello della Mugazzena (WinesCom and Comunicare) made from 75% Vermentino, 10% Viognier and 15% Malvasia. The soil is clayey sandy terraced alluvial deposits and the training system is guyot. Manual harvest. The grapes are destemmed, sorted and softly pressed. The must is cooled and pumped into a steel tank where it is decanted. Fermentation takes place in stainless steel tanks at a controlled temperature. The wine is decanted again and placed in French oak barrels for 12 months. The wine does not undergo malolactic fermentation. This a crisp wine with a fresh bouquet and hints of citrus fruit, herbs and a touch of flint. 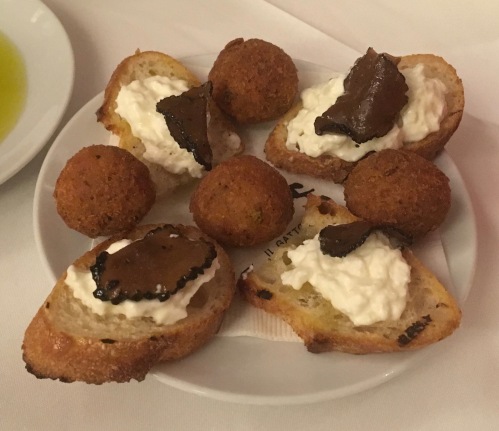 An assortment of small bites were passed.

Grillo 2018 Barone Sergio “Alegre” 2018 IGT (WinesCom) Sicily made from 100% Grillo The vineyards are at 70 meters. White wine vinification in temperature controlled stainless steel tanks. The wine remains in bottle for 2 to 3 months before release. Fresh and lively, with hint of tropical fruit and fragrant white flower, pineapple, ripe apricot and citrus and good acidity that lends a mouthwatering finish. =I was very impressed with this wine. 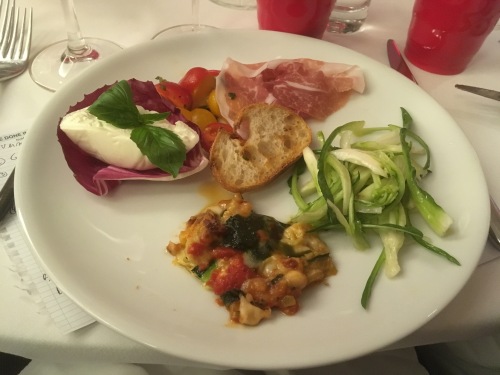 Friulano 2018 La Ponca (WinesCom) made from 100% Friulano. Soil is marl and sandstone of Eocene origin know as Ponca. There are 6,000 plants per hectare, the training system is unilateral guyot and the harvest is by hand the second ten days of September. They are converting to organic production. There is a pressing of whole grapes and a cold static decanting. Temperature controlled fermentation takes place in vitrified cement and stainless steel tanks. Malolactic fermentation does not take place. The wine remains on the lees in cement tanks for 8 months. The wine has hints of aromatic herbs, peach and pear, with a touch of bitter almonds and a long lingering finish. I was very impressed with this wine.

Pinot Grigio Ramato DOC Friuli Colli Orientali 2018Valentino Butussi (PR Vino)100% Pinot Grigio from vines planted in 1984, 1978 and 2004 from a 1.79-hectare vineyard. The soil on the hilltops is of Eocene-era stratified marl and sandstone. There are 4,400 vines per hectare and the training system is guyot. Harvest takes place in the beginning of September when the grapes are their ripest. The berries are destemmed, and gently pressed and the must is immediately chilled. The free run juice is separated out from the second quality juice and sent to be fermented. The wine is aged for 6 months in steel and 2 to 4 months in bottle before release. This is a dry white wine with hints of citrus fruit and a note of acacia blossoms and almonds. 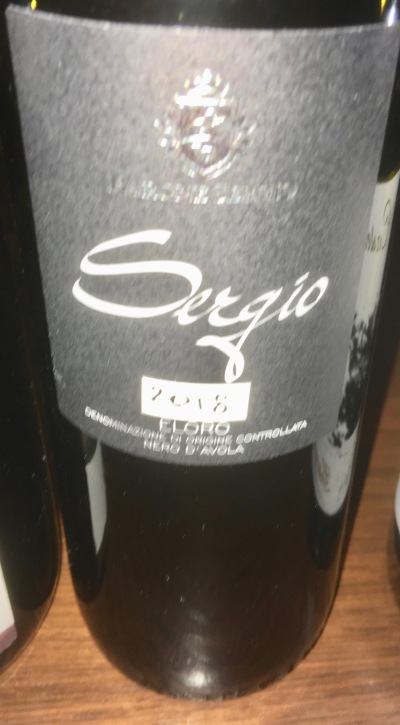 Barone Sergio Sicilia Nero d’Avola Rosato “Luigia” 2018 made from100% Nero d’ Avola the vines are 10 years old and are at 70 meters. Fermentation takes place without the skins. Fermentation is in stainless steel tanks at a controlled temperature. The wine matures in steel for 6 to 7 months and in bottle for 2 months before release. The wine has hints of strawberry and cherry with a touch of raspberry.

The will write about the Red Wines in another blog