Michele and I rented an apartment in Rome again in February. 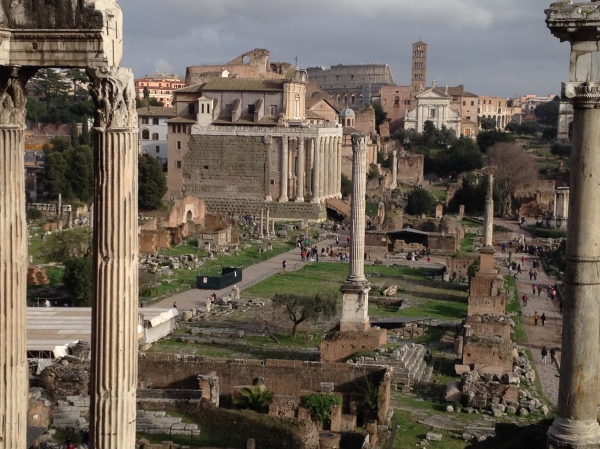 We have decided that for us it is better than a winter vacation to Florida, Mexico or the Caribbean. While it may not be as warm, the food is much better and Rome is Rome and we love it. These are the restaurants that Michele and I go back to every time we are in Rome.

Trattoria da Giggetto– Michele and I always go to the same place for lunch when we arrive in Rome.  We drop off our bags and walk to Da Giggetto (39-066861 05) at Portico D’Ottavia 21/A-22 in the Jewish ghetto.

I do not need to look at the menu because I always order the same things: fiori di zucca ripieni con mozzarella e alici.  The flowers were small and crunchy and very good. 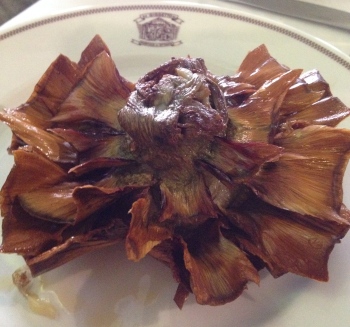 The tiny clams were tender and seasoned with just the right amount of parsley, garlic, olive oil and a hint of hot pepper.  Michele had carciofi alla romana, braised artichoke and fettuccine with ragu. We drank the Passerina del Fruisnate IGT 2014 from Feudi Del Sole. It went very well with the food even with the fried artichoke.

Trattoria Armando al Pantheon-Salita de’ Crescenzi 21 This is one of Michele’s favorite restaurants in Rome and one of the restaurants that you have to make a reservation for lunch or dinner. We only started going here a few years ago and have been going there ever since.

I started with grilled bread Roman style with butter and anchovies,  while Michele had Buffalo mozzarella with braised Roan artichoke.

Then we had spaghetti alla Matriciana, chicken in white wine with peppers, and grilled sausages with lentils. 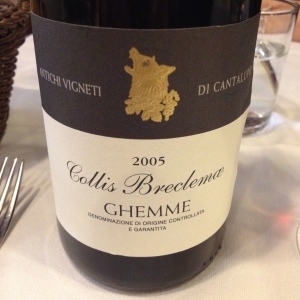 Michele and I have been coming here for the last 35 years and nothing changes, the owners, the waiters and the menu are the same. I started as usual with a carciofo romano, fried zucchini flowers stuffed with mozzarella and anchovies and of course bucatini matriciana

I had the roasted baccala with potatoes in a tomato and onion sauce, which was delicious. 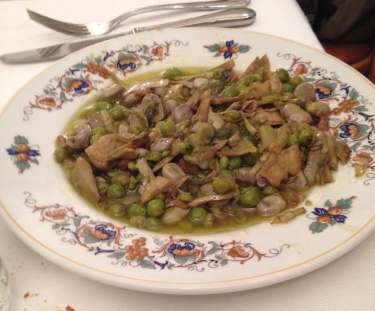 Michele likes to come here when the weather is warm so we can sit outside because the restaurant is in the Piazza Farnese and she loves the view.

We had fiori di zucca, fried artichoke, spaghetti with fresh anchovies and pecorino.

and crostata for dessert.

The Mariani family has owned the restaurant since 1887. Francesco Mariani takes care of the front of the house while his brother Elio is in the kitchen.

Michele and I have been coming here since 1981. It is the restaurant where I drank Fiorano Rosso for the first time. The vintage was 1961

We went with friends that live in Rome and they were surprised when the Francesco came over and the first thing he said was, “I have one bottle of Fiorano Rosso left, the 1983, do you want it?” That was a trick question. Of course I wanted it!

Considering the wine and the food, it is the best restaurant in Rome with over six hundred wines from Italy and all over the world. The wine cellar is dug into Monte Testaccio, a hill made from broken amphorae, which date back to Ancient Rome. Francesco gave us a tour of the cellar that holds over 600 wines. 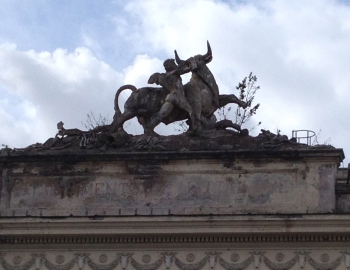 The slaughterhouses of Rome used to be located here and the restaurant still specializes in the so-called quinto quarto, the fifth quarter, or innards and other spare parts.