An Evening with Robert Mondavi Wines

Having attended previous Mondavi wine tastings organized by publicist Lisa Klinck-Shea, I was looking forward to this latest one, and the opportunity to meet the winemaker and the chef.

Reception: Carrot with Polenta and Sumac and Foie Gras with Preserved Vegetables. 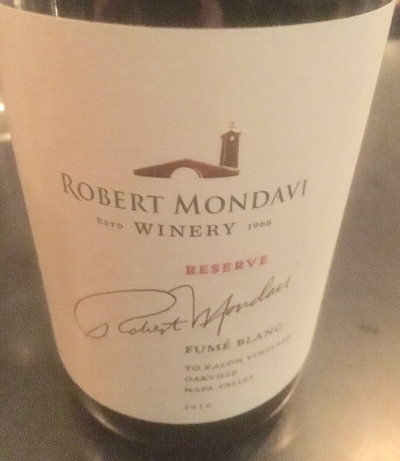 Robert Mondavi Winery Fumé Blanc Riserve 2016 TO Kalon Vineyards Napa Valley. Made from a blend of 96% Sauvignon Blanc and 6% Semillon. The grapes were picked between August 5th and August 23rd. The wine has hints of white peaches, grapefruit and a hint of orange blossoms with a nice finish and aftertaste.

Robert Mondavi Winery Pinot Noir Reserve 2015 Carneros, Napa Valley. Made from 100% Pinot grapes from selected blocks from Rancho Carneros (forty-year-old vines) and the Hyde Vineyards. The clusters were hand harvested and sorted. Portions of the grapes were destemmed. Fermentation took place mainly in small traditional open-ended fermentation tanks and the cap of skins was pushed down gently. Several days of cold soak prior to fermentation and extended maceration afterward added up to a total of 25 days skin contact. The wine went into 91% new French oak for malolactic fermentation and matured for 9 months. The wine has hints of red plum, cherry, a touch of vanilla and cinnamon and a fruity finish.

Robert Mondavi Winery Chardonnay Reserve 2016, Carneros, Napa Valley. Made from 100% Chardonnay from the Hyde ranch. Grapes are hand harvested into one-half ton bins at daybreak, the clusters were gently pressed and slow cool native yeast fermentation took place in 100% Burgundian-style barrels. Seventy-seven were new French oak. As the wine underwent malolactic fermentation, each barrel was stirred twice a week, recirculating the yeast to gradually build in greater creaminess and further enhance the texture. When optimal balance of fruit and oak influence was reached, it was blended and transferred to neutral barrels with the lees to continue aging for a total of 12 months. The wine was bottled in October 2017. The wine has citrus flavors and aromas with hints of pear and apple with a touch of toasty oak and almonds in the finish. 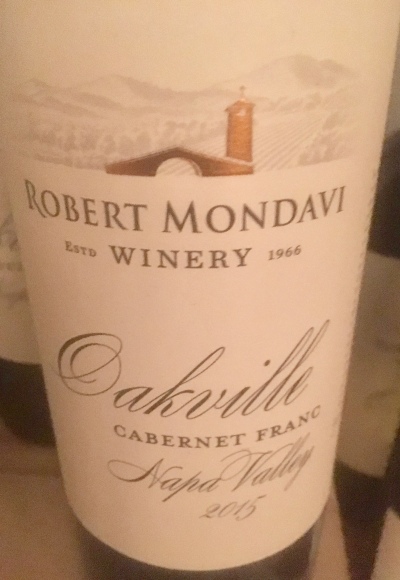 Grapes hand harvested into small bins and sorted in the gravity-flow cellar. The clusters were destemmed directly into traditional French oak tanks for cold soaking, fermentation and extended maceration for 32 days skin contact. The wine was drained, gently pressed into 100% new French oak barrels for malolactic fermentation. The final blend was assembled after repeated tastings over 20 months of barrel tasting. The wine was bottled in August 2017. This is a full-bodied wine with hints of dark fruit, violets and licorice, nice minerality and a long finish.

Robert Mondavi Winery Cabernet Sauvignon 2014, Oakville, Napa Valley. Made from 88% Cabernet Sauvignon, 5% Cabernet Franc, 3% Malbec, 3% Petit Verdot and 1% Merlot. The wine was drained and gently pressed into 29% new French oak barrels for malolactic fermentation. The final blend was assembled with tasting trials over 18 months of barrel aging. The wine was bottled in August 2016. The wine has hints of dark cassis, black cherry, and sage with a touch of vanilla.

Robert Mondavi Winery “The Reserve” Cabernet Sauvignon To Kalon Vineyard, 2015 Oakville, Napa Valley. Made from 92% Cabernet Sauvignon, 4%, Merlot, 2% Petit Verdot and 2% Cabernet Franc. The grapes were hand harvested with 3 stages of strict sorting: on the vine, by individual cluster and then by single berry. There was a total of 37 days of skin contact. The wine was drained and gently pressed into 100% new French oak barrels for malolactic fermentation. The final blend was assembled by repeated tastings over 20 months of barrel aging. The wine was bottled in August of 2017. The wine has hints of dried plums, cassis, black fruit, vanilla and a touch of tobacco.

Robert Mondavi Winery Cabernet Sauvignon Reserve 2008, Napa Valley made from 85% Cabernet Sauvignon, 8% Cabernet Franc and 7% Petit Verdot. The wine is blended from selected blocks from the To Kalon (highest beauty) as well as other vineyards within the Oakville Bench. Appellation 100% Oakville District, Napa Valley. Grape source 82% To Kalon Vineyard. Each vineyard block is hand harvested into small containers. The grapes are gently hand sorted and the clusters are destemmed directly into oak fermentation tanks using a gravity-flow method which eliminates the use of a must pump. After fermentation the wine goes through 40 days of maceration. To drain and press, the free run wine flows by gravity directly to the barrels and the pomace (skins and seeds) is conveyed to a basket press for a gentle extraction. Malolactic fermentation is in barrels. The wine is aged for 18 months in 100% new French oak. The wine was bottled in November of 2010. This is a well-structured wine with hints of blueberry, cherry and sage with hints of coffee and dark chocolate. The wine will age for many more years.

Dessert;  Apple and Fig Leaf with Seeds, Turmeric and Honey 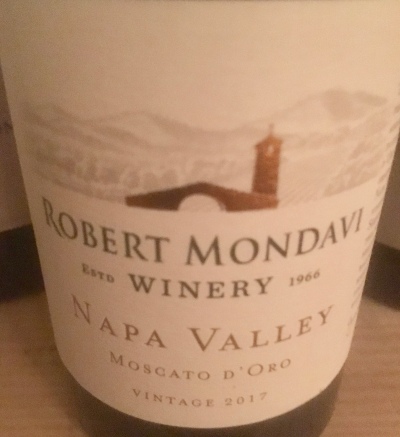 Robert Mondavi Winery Moscato d’Ora 2017, Napa Valley made from 100% Moscato di Canelli. All the grapes were harvested from a single block on the Wappo Hill Vineyard in the heart of Napa Valley’s Stag’s Leap District. The grapes were picked between September 4th and September 14th. The hand-picked grapes were gently pressed as whole clusters, the juice was inoculated with a yeast strain selected to heighten the inherent floral character of the Moscato. The slow cool fermentation was stopped when the natural sweetness reached optimal balance with the acidity. The wine was bottled in February of 2018 to retain freshness and fruitiness. Residual sugar 76g/l and the alcohol is 8%. The wine has hints of nectarines, peaches, white blossoms and honey and is very refreshing on the palate.

It was an unforgettable night of wine and food

The Culinary Luminaries series of panel discussions at the New School University in New York City celebrates crucial figures of the past and present world of food and gastronomy.  James Beard, Julia Child, M.F.K. Fisher, Craig Claiborne, Joseph Baum, Clementine Paddleford, Pellegrino Artusi, and Michael Batterberry are among those whose contributions have been explored.  The series is sponsored by the Food Studies Program at The New School for Public Engagement. Fabio Parasecoli, Associate Professor of Food Studies is the head of the program.

Last Fall I attended the program on Pellegrino Artusi (Michele was on the panel) and enjoyed it very much.  After the event, Professor Parasecoli asked me if I would like to be part of a panel on Robert Mondavi. I told him it would be an honor.

Robert Mondavi, Culinary Luminary
The panel considered wine and its role in U.S. culinary culture through a discussion of the life and work of Robert Mondavi, the pioneering Napa Valley vintner. Mondavi championed fine wine as an integral part of the good life in any country.  The speakers explored his decisions as a producer, his marketing practices, his international collaborations and global influence, and related cultural and economic issues
.http://www.youtube.com/thenewschoolnyc#p/u/11/CHiqHb6sE2c   This is the link to the video. It runs for almost an hour but I think you will find it very interesting.
Panelists: Tyler Colman, author of Wine Politics; Frank J. Prial, former New York Times wine columnist; Charles Scicolone, wine writer and wine consultant; and Julia Flynn Siler, author of the bestselling The House of Mondavi: The Rise and Fall of an American Wine Dynasty. Culinary historian and New School faculty member Andrew F. Smith moderates.
The first speaker was Ms. Siler and she spoke about  the Mondavi family and how poor business decisions led to their downfall. She also said the no one from the Mondavi family would speak to her about her book.
Tyler Colman spoke about food friendly, estate wines in California through the lens of Robert Mondavi’s legacy.
Frank Prial spoke about his first meeting with Robert Mondavi in the early 1970’s.
I spoke about California wine in general, Robert Mondavi’s contribution to wine and his worldwide influence on wine. I also said that what Julia Child did for food in this country, Robert Mondavi did for wine.