Rome in the spring is magical.  It is my favorite time to be there. Michele and I were spending a week in Sorrento and what better way to begin and end our travels than in Rome.

The days were becoming warmer and longer and just walking around the city and taking in the sites was a pleasure. Looking at the official seal of Rome, SPQR meaning ‘The Senate and the People of Rome,’  always reminds me that Rome was once the most important city in the world.  We sat in the outdoor cafes on sunny mornings enjoying cappuccino and cornetti and watching the world go by. At night we would stop for a Campari and soda or a Negroni at one of the roof garden bars watching the setting sun.  But as I have said before, I love the food in Rome and the highlights of the day for me are lunch and dinner.

Here are some favorite restaurants we went to on this trip. Some we have only been to a few times, others we have been going to for over 30 years. 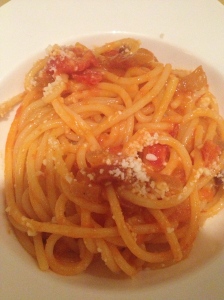 The first time I went to Il Matriciano ( 39-06-32500364) Via dei Gracchi, 55, was in 1981 and have been going back whenever I was in Rome, until two years ago.  On that trip, we sat outside and were disappointed in the service and the food.  The waiter wanted to serve us the antipasto, which included a slice of pizza, but I just wanted zucchini flowers.  He seemed to think he knew more than I about what I wanted and kept on suggesting dishes that were of no interest to me.  The menu has barely changed over the years and I always order the same things when I eat there.  It annoyed me and the experience was just not the same

We decided this year to give the restaurant another chance. On our way there, Michele said, “Let’s ask to sit inside because that is where all the Romans are.” When we arrived the owner offered us a table outside but we insisted on inside.  After moving a few tables around, we were seated. The restaurant filled up very quickly and Romans sat at every table inside. 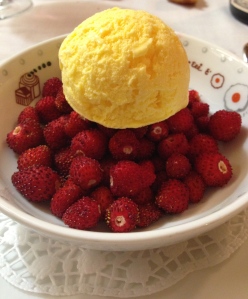 Our waiter was very good considering it was a busy Sunday afternoon.  He only spoke to us in Italian which we preferred.  As usual, I ordered zucchini flowers (I cannot get enough of them) to start. These were perfectly deep fried with a small amount of mozzarella filling and more than a hint of anchovies.  I ordered the bucatini all’Amatriciana.  Along with one or two others, this is one of the classic Roman pastas. Some places serve it with rigatoni but it is not the same. Then I had abbacchio (baby lamb) roasted with potatoes. It was cooked to perfection, moist with crisp skin. For dessert I had tiny fragoline, wild strawberries, and gelato. Michele loves fragoline and orders them every chance she gets.

The Barbera “Latina” 2007 from Cascina Castlet went very well with the pasta and the baby lamb. The restaurant had returned to form and produced the perfect traditional Roman meal. I was very happy.

Last year we went to restaurant Armando al Pantheon, Salita de Crescenzi, 3906 68880 3034, for the first time and liked it so much that we decided to go again this year.  Michele made a reservation on line and when we arrived in Rome we confirmed the reservation just to make sure. This is also a traditional Roman restaurant. We ordered crostini with truffles and quail egg, bucatini all’Amatriciana and grilled lamb. Once again we had the fragoline with gelato for dessert.  Michele really likes the food here.

The wine was the 2009 Montepulciano D’Abruzza, from Emidio Pepe.  At less than 40 euro, it was a real bargain in a restaurant. The wine was big but with a lot of fruit and not as tannic as I expected. I should have asked them to decant the wine. Most of my experience with this wine has been with vintages that are 25 years and older.

Roscioli Salumeria Vineria con Cucina – Via dei Giubbonari 21-22. This is not only a restaurant but also a salumeria, a shop specializing in salumi and cheese. Michele likes the restaurant because it has the best spaghetti carbonara in Rome. It can also be very creative with items like the hamburger di bufala with grilled ham and a balsamic drizzle, and the burrata e alici. This time we both ordered the carbonara. Michele is right, it was terrific.

The wine was the 2008 Cerasuolo (Rosè) 100% Montepulciano d’Abuzzo from Eduardo Valentini. I believe it is Italy’s best Rosè and it was less than 40 Euro. 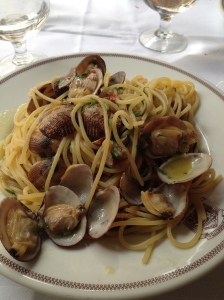 Da Giggetto (39- 066861 105) at Portico D’Ottavia 12 A, in the Jewish ghetto. It was a chilly and cloudy afternoon in Rome as we made our way to the restaurant. We sat   inside in one of the small rooms that look onto the street.  I do not need to look at the menu because I always order the same things: fiori di zucca ripieni con mozzarella e alici (small and crunchy but very good), carciofi alla giudia  (fried artichokes) and spaghetti con vongole veraci. The clams were small and tender with just the right amount of parsley, garlic, olive oil and a hint of hot pepper. Michele had fava beans with guanciale. We have been going here for many years and have never been disappointed.

Palatium- Enoteca Regionale Via Fattina 94   39-06-6920 2132. This is a restaurant run by the region of Lazio. All of the food is typical of the region. The wine is only from the region and a real bargain as most of them are between 10 and 14 euros. There is a very large selection. The restaurant was a few doors down from our hotel on the Via Frattina and as luck would have it we went there on the night that it rained. I had cacio e pepe which is a typical Roman dish and Michele had mozzarella in carrozza, a very large toasted sandwich.

We drank a bottle of Lazio I.G.P “Colle DE” Poggeri”  2011 from Cantina Stefanoni 100% Roscetto (Trebbiano Giallo). The harvest took place from 10 to 15 of October. Fermentation is on the skins for about 12 hours. The must fermentation is in wooden barrels for about two months. The color was yellow with golden reflections and the wine looked like it might have oxidized. This was not the case; it was fresh, soft and well balanced with good fruit aromas and flavors.  It is a bargain at 10 euros.