Two days after I returned from Lyon and Beaune in France, I attended a tasting of the wines of Chateau Climens, Grand Vin De Sauternes paired with cheese.

Chateau Climens is considered by many to be the number one producer in Barsac. Though Michele and I had enjoyed cheese and wine after practically every meal in France, the wines had always been red or white and I looked forward to attending. 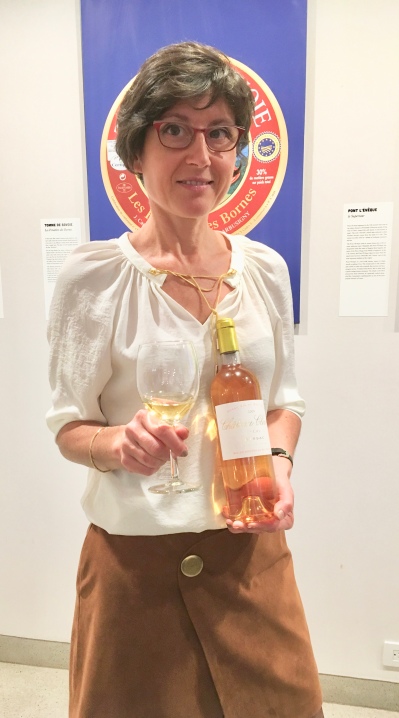 Château Climens’ history can be traced back to the 16th century. Lucien Lurton bought the property in 1971 and his daughter Berenice Lurton has managed the estate since 1992. In 2009 she brought the shares that belonged to her family and became the owner with 100% of the shares. We were fortunate to have Berenice as the speaker for the event.

Berenice said that the estate is located in the southern part of the Barsac appellation, just outside the small village of La Pinesse. The vineyards are all planted with Semillion grapes and lie on the highest point in Barsac at 20 meters. There are 30 hectares of vineyards stretching around the château in one continuous vineyard, which apparently has not changed since the 16th century. The soil is gravel/sandy topsoil and limestone clay subsoil. This is the “red sands of Barsac.” The average age of the vines is 35 years.

Berenice said that the micro climate of Sauternes, aided by the exceptional terroir allows for the early development of noble rot, Botrytis Cinerea. The staged harvest is meticulous in order that only grapes affected by perfectly pure botrytis are harvested. Yields can be low and vary from year to year.

The grape must undergoes fermentation in barrels without the addition of cultured yeast. This is an old technique and the only one which allows the beginning of the maceration on the lees. The wine is then aged in small oak barriques (new and used) for 20 months. The final blend takes place in vats.

Berenice said Climens is classified as a Sauternes 1er Cru Classé. In 2010 the estate was converted to biodynamic cultivation.

With the cheese we tasted 4 sauternes from Château Climens: 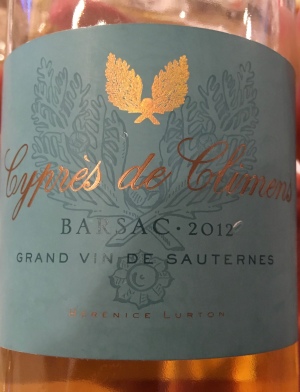 Cypres de Climens Barsac 2012 100%, Grand Vin De Sauternes made from 100% Semillion, like all of their wines. The winery is the only producer of single variety wines of the region.

This is the “second wine,” Berenice said, because it is the second selection from a blending, implying that there is no difference in the production process of the two wines, only the tasting deciding their future. Cyprés obeys a different idea, that of obtaining a delicious wine from an early age, while the complexity of Climens requires minimal aging of just a few years.

The wine is fresh and smooth with hints of white fruit, citrus fruit, apricot and a touch of pineapple. 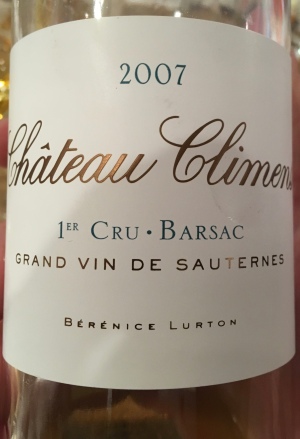 The 2009 and 2007 are classic Chateau Climens  wines and will only get better with age.

Berenice suggested we taste each wine with all the cheeses. 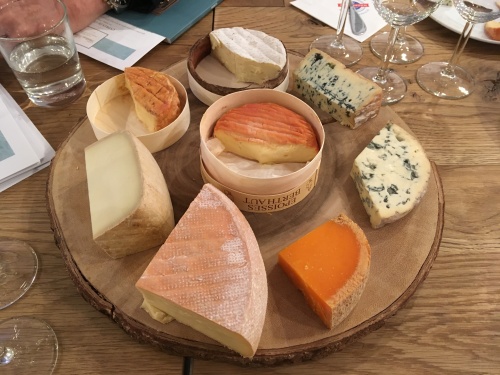 Saint-Nectaire (Auvergne) this is a pressed cheese matured for 6 weeks on rye straw. It is smooth but not soft, flavorful, nutty and vegetative with a touch of milk and salt.

Petite Sapin Vacherin Mont D’Or (Franche-Comté) this is a washed rind cheese ripened in spruce bark which should not be removed when serving. The cheese has a smooth, silky and buttery texture with woody and nutty flavors.

Mimolette Extra-Aged (Pas-de-Calais) this is a pressed and cooked cheese matured for 18 months. The cheese is hard dry and crumbly with an orange color. It has aromas of roasted nuts with a touch of butterscotch. I kept going back to taste this cheese! 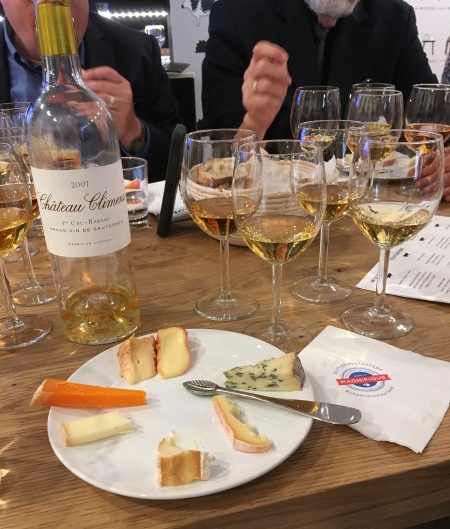 Ami Du Chambertin (French–Comté) this is a soft cheese with a washed rind by Marc de Bourgogne spirits and is matured for 1 month. It has a moist creamy texture inside, and strong sharp flavor with a savory tone.

Époisses (Bourgogne) this is a soft cheese with washed rind by Marc de Bourgogne spirits and matured for 1 month. It is creamy, firm and moist and full flavored. 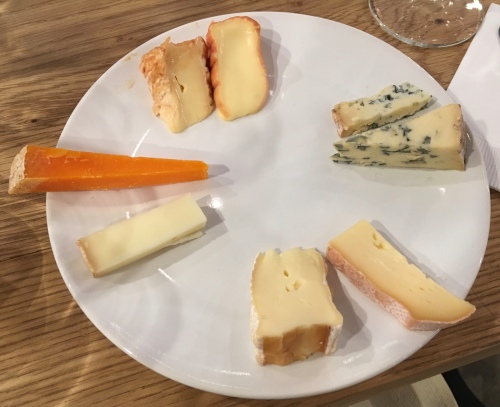 Blue D’Auvergne (Auvergne) this is a blue-veined cheese matured for 3 months. This cheese is firm, buttery and slightly supple. It is full flavored, woody with spicy tones of grass and mushrooms.

Fourme d’ Ambert (Auvergne) This is a blue-veined cheese, matured for two months. It is firm without suppleness, rich and creamy, fruity and slightly salty but sweet on the palate.

All of the wines worked very well with the cheeses.

The 2005 is fantastic. It is a complex wine with a precise balance between the sweet, acidic and bitter elements. It has hints of honey, apricot, nectarine, and marmalade,  mouth filling almost creamy with a very long finish and very pleasing aftertaste.

Champagne, Wine and Ravioli with Truffles

Our friends Ernie and Louise De Salvo invited us to their home for a special lunch featuring the season’s first white truffles. Their grandson Steven De Salvo, who is a terrific cook, would be assisting in the kitchen. I knew that Ernie would choose just the right wines to complement the meal.

We started with the Champagne Gosset “Celebris” Vintage Extra Brut 2002 made from 55% Chardonnay and 45% Pinot from Grand Cru grapes. This is complex Champagne with tiny bubbles, floral aromas and citrus fruits aromas and flavors, a hint of lime and a touch of vanilla. 2002 was an excellent vintage for Champagne. 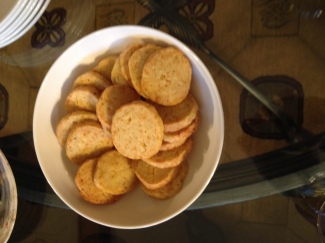 We had this with dates stuffed with foie gras, nuts and Parmesan cheese wafers.

Barolo Bussia “Dardi Le Rose” 1995 Poderi Colla made from 100% Nebbiolo from the hamlet of Dardi in Bussia Soprana di Monforte. It was the first to be vinified separately by Beppe Colla in 1961 and identified on the label. The vineyard has a south/southwest exposure and is at 300 to 350 meters. The vines were planted in 1970 and 1985 and there are about 4,000 vines per hectare. It is aged in oak casks for 24 to 28 months. This is a full-bodied wine with hints of red berries, tar, liquorice and tea. This is a classic Barolo. 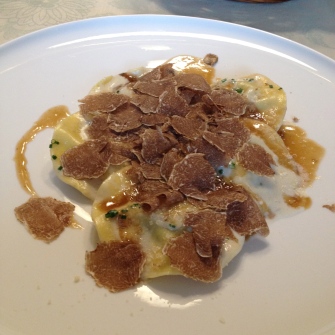 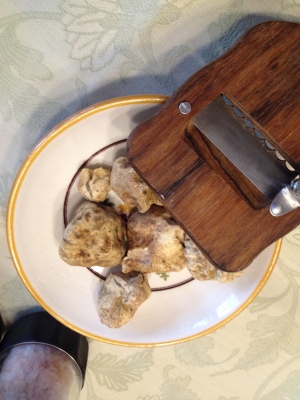 Ernie showered the ravioli with white truffles. The combination was exquisite!

Barolo Monfortino Riserva 1997 Giacomo Conterno 100% Nebbiolo from Serralunga’s Cascina Francia vineyard. The exposure is south/southwest and the soil is calcareous limestone. They use wooden vats with regular breaking-up of the cap. The wine is aged for 4 years in large oak barrels. Another classic Barolo with hints of tar, tea, leather, red berries and faded roses.

With this we had Ernie’s interpretation of a classic Osso Buco served on whipped potatoes.

A 375 bottle of Sauterne Chateau Doisy-Véderines 2001.Made from 80% Semillon,15% Sauvignon and 5% Muscadelle. Fermentation in temperature controlled steel vats for a week and then the must is transferred to barriques for about 20 months. This is a full-bodied Sauterne with hints of apricot, orange blossom and a touch of honey and marmalade. It is a dessert wine that will age.

With it we had a rich Italian style cheesecake.