After speaking about Valpolicella and differences related to altitude (see  https://charlesscicolone.wordpress.com/2016/11/14/valpolicella-background-and-the-influence-of-altitude/), Alberto Brunelli, the oenologist for the  Consorzio Valpolicella, turned to  the subject of  microclimate variations and the influence of Lake Garda. He divided the second group of wines accordingly.

The distance of vineyards from Garda Lake: the further  they are, the maximum summer temperatures are higher and can influence the vines and their expression in wine in many ways. From west (near the lake) to east (far from it), we have this trend:

Distance from the lake, along with the vineyards’ sun exposition and altitude influence every single valley’s and vineyard’s temperature.  The daily temperature range affects the polyphenolic and anthocyanin potential in a vintage, as well as the body, the color and the aging of the wine.

Gerardo Cesari Valpolicella DOC Classico 2015 made from 75% Corvina and 25% Rondinella. Harvest is from September 20th to October 15. Traditional fermentation with maceration for 10 days and then malolactic fermentation takes place. The wine remains in stainless steel for at least 4 months and then in bottle for a short time before release. The wine is fresh and fruity with aromas of wild berries. 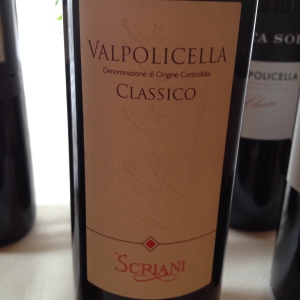 Scriani Valpolicella DOC Classico 2015 made from Corvina 60%, Corvinone 20%, 10% Rondinella, 7% Molinara and 3% Oseleta from the La Costa and Ronchiel vineyards in the heart of the Valpolicella Classico zone. The land ranged in altitude between 250 and 400 meters. The soil is composed of a mixture of clay, limestone and basaltic tufa. Harvest is by hand in early October. Fermentation takes place in stainless steel tanks with 12 days of maceration on the grape skins at a controlled temperature. The wine in fragrant and fruity with hints of red berries and a touch of sage.

Santa Sofia Valpolicella DOC 2014 Made from 70% Corvina and Corvinone with 30% Rondinella from vineyards with calcareous soils located in the municipality of San Pietro in Cariano. Maturation is in stainless steel and the wine remains in the bottle for another 3 months before release. The wine has hints of cherries, raspberries with a touch of spice and good acidity.

San Cassiano Valpolicella DOC 2014 made from 70% Corvina, 15% Molinara and 15% Rondinella. The training system is pergola and there are 3,300 vines per hectare. The grapes are left on the vine to dry for a week. Fermentation is in stainless steel vats, without the addition of yeast. The wine is aged in stainless steel vats for 12 months. They include 15% Molinara, a varietal abandoned by many producers, but they feel it gives the wine a salty taste with spicy notes. The wine has hits of red fruit and cherries.

Fattori Valpolicella DOC 2015 “Col de la Bastia” Made from 65% Corvina, 15% Corvinone, 10% Rondinella and 10% other varieties. 12 hectares located in Bastia, exactly on the valley between the Val d’Alpone and the Val d’lllai. The shaley clay-subalkaline land is formed in a broad plateau with slight slopes, produced by the alteration of limestone formations. The altitude is 450 meters. There are 5200 vines per hectare and the vines are between 20 to 35 years old. Harvest is by hand the last two weeks of September. Fermentation and maturation is in stainless steel and wooden barrels. The wine had fruity aromas and flavors with hints of cherries and other red fruits.

Next time vintages differences: The 2014 and 2015 and conclusions.