From the Alto Adige: Sylvaner, Sauvignon Blanc and Schiava

Alto Adige, also know as Südtirol due to its deep-rooted bicultural heritage, is Italy’s northernmost wine region. Located at the foot of the Alps and the Dolomites, the region borders on Austria and Switzerland. The Alps protect it from inclement weather from the North and the Atlantic, while the Dolomites protect the vineyards from the cold, damaging winds from the east.

Along with its proximity to the Mediterranean and Lake Garda, this makes it an excellent region to grow grapes. The vineyards range from 600 to 3,300 feet and the soil is mainly porphyry, limestone and slate rock with glacial deposits of gravel, sand and clay. It is interesting to note that in the summer, the temperature in Bolzano is higher than in Palermo in Sicily. The people that live here call their region the Sud Tyrol and themselves Tyroleans. The food is decidedly Austrian with only a hint of Italy. Ham is called speck and they have a cheese called Weinkase Lagrein and bread called Schuttelbrot. 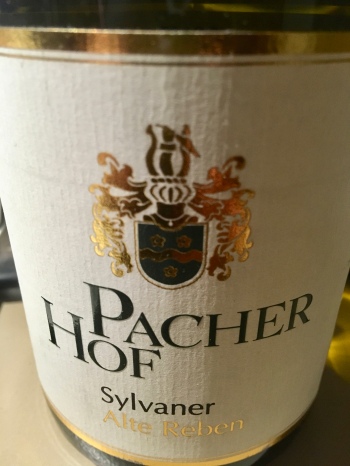 Sylvaner Alte Reben 2015 Valle Isarco DOC Pacher Hof 100% Sylvania. The winery is located on the slopes of Neustifit just above Brixen and the vineyards have been family property since 1142. The vineyards are at 620 to 700 meters with sandy and loamy soil. The microclimate makes it warm here and there is a big variation between night and day temperatures. Training system is guyot and the harvest is by hand the last week of October. There is a slow fermentation at a controlled temperature in stainless steel tanks and the wine remains on the lees in stainless steel tanks and barrels for 6months. The wine was bottled in April 2016. This is a wine with fresh aromas and hints of tropical fruit, pineapple and a touch of banana. The wine works well with speck and the difficult to match asparagus. $26

Lahn Sauvignon 2016 Alto Adige 2015 St. Michael Eppan, The 340 winemaking families that form the backbone of the winery joined forces in 1907 to create the St. Michael-Eppan Winery. Made from 100% Sauvignon from vines 10 to 25 years old in Eppan/Berg at 480 to 550 meters. The exposure is southeast , the soil is limestone gravel and the training system is guyot. Harvest at the end of September to early October by hand with a selection of grapes.
Fermentation and development of the lees is in stainless steel tanks until the end of February. This is a balanced wine with fresh fruit flavors, a hint of grapefruit, a touch of honey and good minerality. It matches well with light Asian cuisine such as sushi. $19 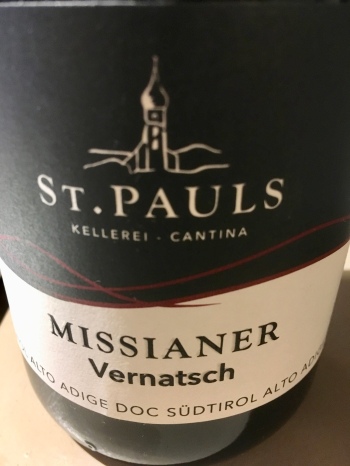 Missianer Vernatsch (Schiava) 2016 Sudtirol Alto Adige DOC St. Paul. The St. Paul’s Cooperative Winery was founded in 1907 by 36 wine growers from St. Paul, Missian, Berg and Unterrrain. Today there are over 141 members.
Vernatsch (Schiava) is a traditional South Tyrolean grape. The training system for these old vines is the Pergola. There is a slow fermentation at a controlled temperature in stainless steel, then the wine is aged in large wooden barrels. This is a fruity wine with red and fruit aromas and flavors and a hint of blueberries. The wine goes well with speck, cold cuts and cheese. $19