The Wine of Tenuta Montauto and Capezzana

I have known Beatrice a long time and have been drinking the wines from Capezzana for over 40 years and have always enjoyed them.

Riccardo said the reason there is a hare on the label is because in Italian Lepri means hare. He wants to make good wine as naturally as possible and make then clean and light and very drinkable. He also said that his wines can age and as they age they become more complex.

Tenuta Montauto is located in the hamlet of Campigliola in the commune of Monciano in the Province of Grosseto. The estate was founded in 1960  and in the 1980’s the founder, Enos, Riccardo’s grandfather, planted the first vineyard of Sauvignon Blanc.  Today there are 200 hectares of which 14 are planted in vines, 8 are olive groves, and 40 are of arable lands. He said the rest is covered in woodland which stretches down to the sea, providing an isolated special location with not a factory in sight. They do not use chemical herbicides or pesticides during the harvest.  The small crates are sanitized and the grapes are sanitized with ozone sandpit in a refrigerating room before being vinified. The wines are stabilized using natural chilling techniques.

The Wines of Tenuta Montauto

Maremma Toscana DOC “Enos I”  2020 made from 100% Sauvignon Blanc from 40 year old vineyards farmed with organic methods. The vineyards are at 200 meters and 10km from the coast in the southern part of the province of Grosseto. The soil is predominantly clayey and stony. Riccardo said the training system is spurred cordon to favor shading during the summer heat and to avoid an undesired oxidation. There are 3,300 vines per hectare. When the grapes are ripe they are harvested and selected manually during the last 10 days of August very early in the morning. This lowers the risk of undesired fermentation. A soft pressing of the grapes takes place. After a settling of 36 hours, fermentation is in stainless steel tanks at a constant temperature of 16C. This is a dry fresh wine with hints of citrus fruit, lime, aromatic herbs, and sage. 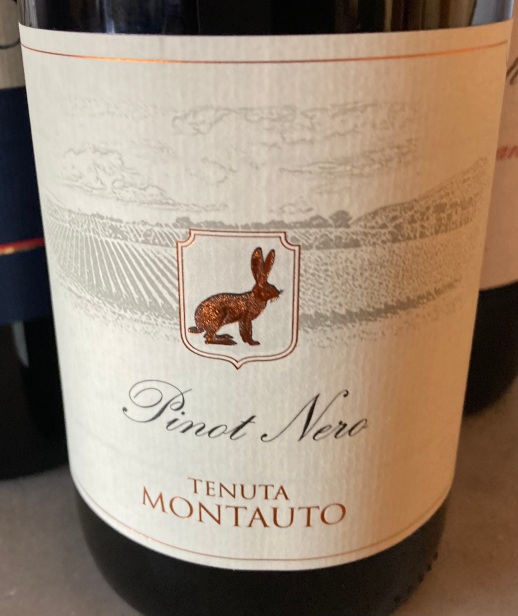 Pinot Nero Toscana IGT 2019  made from 100% organic Pinot Nero from 15 years old vines. The vineyard is at 200 meters and 10 km from the coastline in the southern part of the Maremma. The soil is mostly clay with many pebbles  There are 3,300 vines per hectare. Grapes are hand-picked to guarantee the best selection in the early morning during the last week of August.  Training system is high cordon to ensure the shading and preserve the aromas of the grapes.

After a soft pressing there is a cold pre-fermentation for 48 hours and then fermentation for 7 days with skin contact in chemo-regulated steel vats. The wine ages for 14 months in oak barrels of which 1/3 are new oak and 2/3 are old. This is an elegant wine with hints of delicate red fruit such as strawberry, raspberry with balsamic notes and a touch of spice.

The winery is northeast of Florence in the Carmignano region. Winemaking here goes back to 804 A. D. Since 1920 the Capezzana estate has been owned by the Contini Bonacossi family. In the 1960’s Count Ugo Contini Bonacossi transformed the estate from sharecropping into a modern estate with the help of his children.  Beatrice is the daughter of the Count.

Capezzana covers 650 hectares of which 78 are vineyards,140 is devoted to the cultivation of olives and the rest are woodlands and arable crops. Beatrice said they have an organic farming system. The oldest vineyard is 55 years old and the youngest planted quite recently. She said that if anyone wanted to look for the alchemical formula of Capezzana’s wine, they would find it in the extreme variability of the soil and the exposure of the vineyards. They exclusively use indigenous yeast. The estate accounts for about 50% of all Carmignano production.

Beatrice said that since 2006, 3,000 bottles of Villa di Capezzana have been kept aside so as to be able to offer them 10 years after the harvest and demonstrate the aging potential of the wine.

As to the aging potential there is no doubt. I have been to the winery a few times and was able to taste wines which were well over 50 years old. In 1985, Sheldon Wasserman, author of the  The Noble Red Wines of Italy, came to my house for dinner with Count Ugo Bonacossi and his wife Lisa. The Count brought a bottle of 1925 Villa Capezzano which was not labeled Carmignano but Chianti Montalbano. The wine was 60 years old at the time. It was a pleasure to drink and was drinking like a much younger wine.  The reason for the label was that Carmignano D.O.C. was not recognized until 1975, thanks to the efforts of Count Ugo, retroactive to 1969. 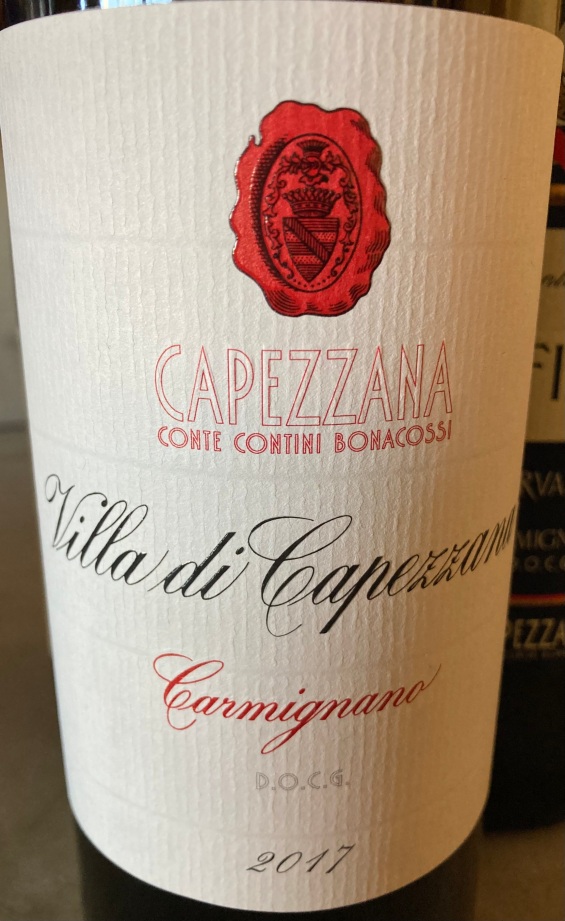 The elevation is 180/220 meters and the soil is clay, limestone, schist and marl. The age of the wines is 20/40 years and the training system is guyot cordon spur. There are 4,500 vines per hectare and they use organic farming practices. Fermentation is with native indigenous yeast. There is a 13 day extended maceration period. Malolactic fermentation takes place in French tonneaux. Aging: 60% in 2nd, 3rd or 4th passage French oak tonneaux, 10% in new French oak tonneaux, and 30% in 5/30 year old untoasted Allier or Slavonian 24 HL barrels for 12 months. The wine is aged for another 12 months in bottle before release. This is a complex and elegant wine with hints of red berries,  a note of blueberries and a touch of violets. 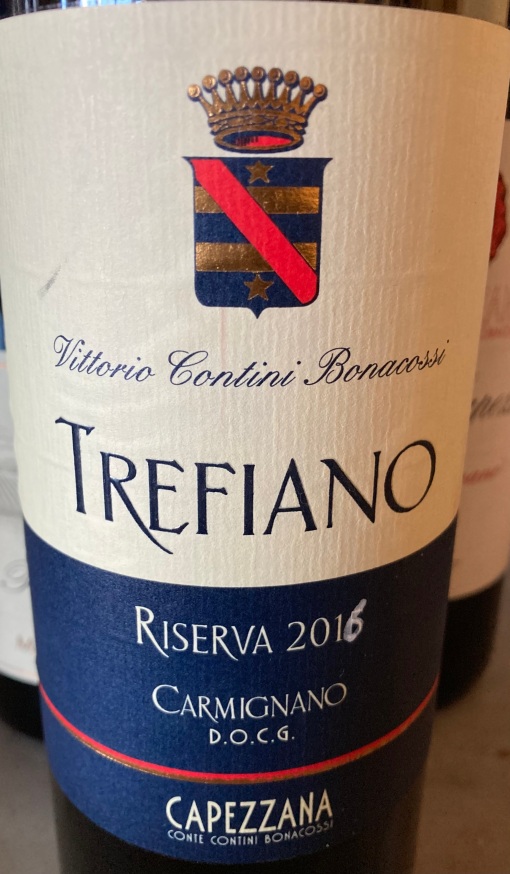 Carmignano DOCG Riserva “Trefiano” 2016  made from 80% Sangiovese, 10% Cabernet Sauvignon and 10% Canaiolo. The exposure is south-southwest and the vineyard is at 200 meters. The soil is clay, schist and marl and the vines are 22 years old. Harvest is at the end of September for the Sangiovese and for the Cabernet the first week of October.  Vinification is in steel tanks. There are 7 days of fermentation followed by 13 days of maceration with the skins before racking at a controlled temperature. Malolactic fermentation is in French tonneaux. The wine is aged in 1st, 2nd, 3rd and 4th passage French Tonneaux of which only 10% is new for 18 months and in bottle for at least one year before release. This is a well structured wine with hints of black cherry, raspberry, a hint of tobacco and a touch of spice. It is made in only the best vintages. It is an easy drinking but complex wine that will age.

A Wine Tasting in Florence

It is always a pleasure to see Riccardo Gabriele of Pr-vino  in NYC or Italy. A little over a week ago, when I was in Florence, Riccardo managed to take the time to meet me there so I could taste some of the wines he represents. The tasting was held at da Burde a very traditional Florentine restaurant about a 20 minute drive from the center. Also at the tasting was Ciro Beligni owner of Le Volpi e l’Uva, the best wine bar in Florence. 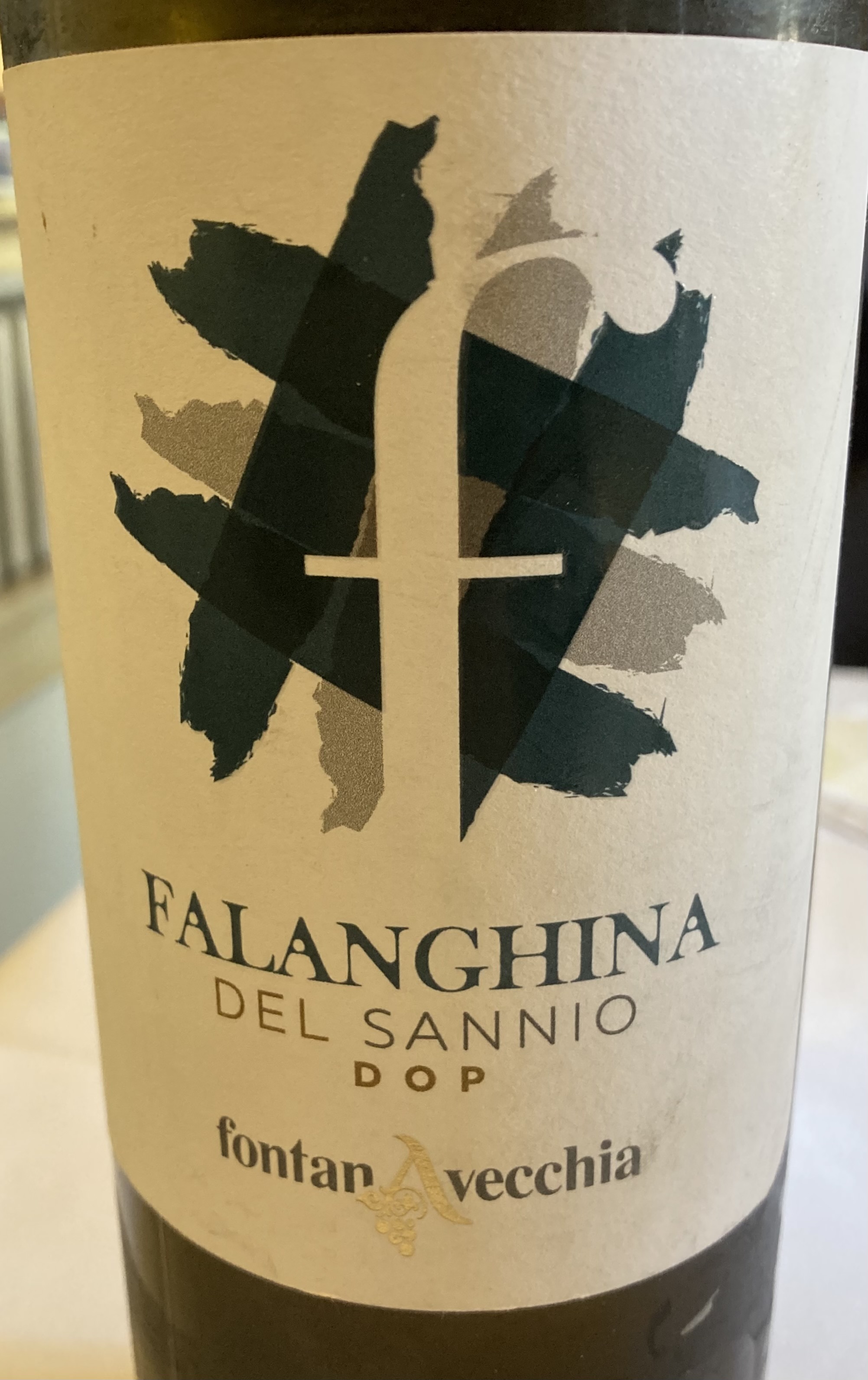 Falanghina del Sannio DOP 2018 made from 100% Falanghina Fontana Vecchia.  The vineyard is at 350 meters and the soil is argillaceous with lime rich marlstone outcrops. The training system is guyot and harvest is the third week of September. Vinification with direct pressing of the grapes at a controlled temperature. Fermentation lasts for 7 days. The wine is aged in steel before it is bottled. It has hints of citrus fruit, lemon, lime with a touch of green apple. I visited this winery a few years ago on a press trip with Campania Stories and I am a big fan of Falanghina.

Bianco Toscana IGT 2019 made from 100% Colombiana Bianca Fattoria Fibbiano. The grapes undergo cold maceration at 10 degrees celsius in steel tanks for ten days. Then the grapes are pressed to ferment the must at 12 degrees celsius. This is done with the aid of selected yeasts which preserves the character of the grapes. The wine then remains in concrete tanks for 4 months before being bottled. The wine has hints of rich fruit, pineapple, papaya and notes of pressed flowers with good acidity. Note The Cantone family of Fattoria Fibbiano found this rare white Colombiana grape among the rows in their vineyards. It is identical to the grape grown in Lombardy with the name Verdea. It is named after a wandering Irish Monk Colombiano.

Friuli Colli Orientali Sauvignon Blanc 2018 “Genesis” Butussi  made from 100% Sauvignon Blanc grapes from a single 40 year old vineyard with a southwest exposure. The soil is of alluvial and colluvial origin, composed of marls deep down and calcareous stones on the surface. During manual harvest  the grapes are picked at optimum ripeness  at the break of dawn. The grapes are destemmed and undergo cold maceration for 24 hours. Only the free run juice is used. Stabilization lasts for 3 days. The first two days the must is kept moving and on the third day it undergoes static clarification. The juice in then racked and fermented at a controlled temperature. !5% of the wine is fermented in traditional oak, the rest in stainless steel. The wine is usually bottled during the week after Easter according to the lunar calendar. It  has hints if citrus fruit, herbs, sage, grass and a hint of white peaches. 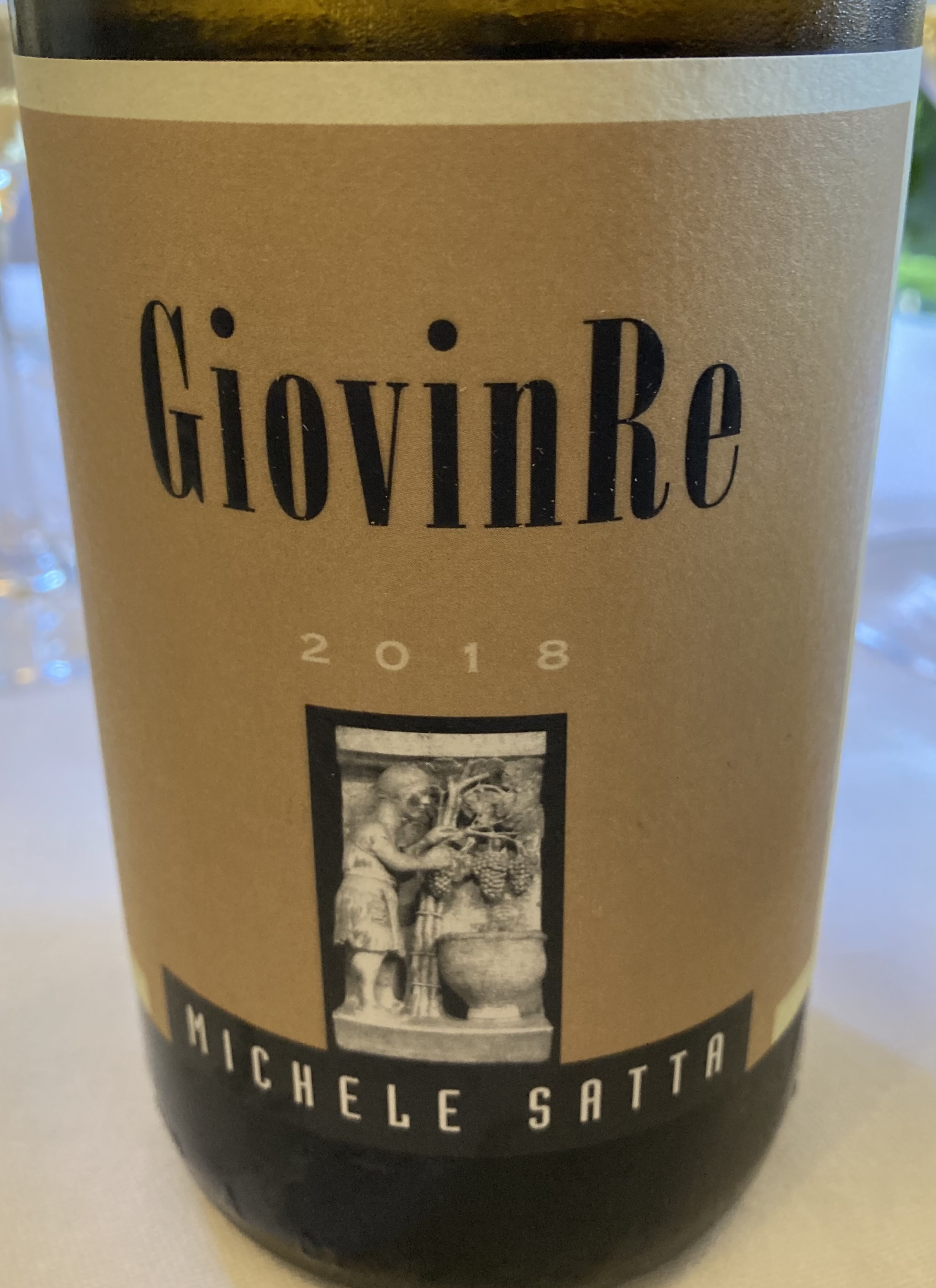 GiovinRe Toscana IGT 2018 Michele Satta made from 100% Viognier. Harvest is the first week of September. The grapes are harvested at full maturation and whole bunches are placed in the  press. The must is decanted for 3 days at 5 degrees and racked. Following the yeast inoculation during the early fermentation, the wine is poured half in old barriques, previously cleaned and polished, half in cement.  Here the alcoholic fermentation takes place and the wine is kept until January without malolactic fermentation taking place. The frequency and number of batonnage are determined by tastings. Once assembled the wine remains in stainless steel tanks for 2 months until the bottling. Then it ages one year in bottle before being released.  This is a white wine that will age.

Friuli Colli Orientali Bianco “At Oasi” 2017 Aquila Del Torre. Made from 100% Picolit grown on hillside terraces. The soil is flysch, interbedded clayey-textured marl and sandstone. The vineyard is at 175/ 300, the training system is guyot simple and there are 5,000 vines per hectare. The wines are 14 years old on average and the exposure is south/southwest. Spontaneous fermentation with native yeasts in French oak barrels. The wine remains on the lees for 12 months. This is a dry white wine with hints of citrus, floral notes and a touch of balsam.

Cuveé Brut Metodo Classico (Champenoise) Tenuta Montauto made from 100% Sangiovese from a 15 year old vineyard at 200 meters on the coast south of Grosseto in the Maremma. The soil is clay and skeleton rich. There are 4,000 vines per hectare and the training system is spurred cordon. The grapes are picked at full maturity by hand and harvest takes place after first week of September. The grapes are gently pressed to obtain a yield of 50%. Fermentation takes place using the cold techniques to enhance the aromas. Sugar 4.5 g/l  This is a crisp  fresh fruity wine with hints of citrus, flint, a touch of passion fruit and a note of brioche. This was the first time I tasted a sparkling wine from Sangiovese made by the Champenoise method and I was impressed.

Another time the Red wines