Thanksgiving dinner is always held at our apartment with the same group of friends. It works out well because they are all involved with food and wine and all contribute something. It was a long fun evening beginning at 4:00PM and ending at 10:00 PM.

Michele likes to change the menu every year.  This year she decided to make a turkey recipe that she had tasted in Palermo, Sicily when she was leading culinary tours there.  She and her group dined at the home of a former caterer and chef, and though retired, the woman still enjoyed preparing meals in her home for visitors to her city.   When Michele visited, she made a roast turkey stuffed with pasta and it was delicious.

Michele asked her about it and was told that she had come up with the idea while experimenting with a similar recipe from the 19th century that was made with partridge.  Since she couldn’t get a partridge, she substituted turkey.  To make the the stuffing, the woman combined a Bolognese type ragu made with a minimal amount of tomato with Bechamel.   She cooked some ziti, tossed it with the sauce and grated cheese and used this as her stuffing.  Whatever could not go into the turkey, she baked in little timbales, one for each guest.

Michele made the turkey in much the same way, though she substituted some homemade turkey gravy for the Bechamel to lighten the sauce.  She made the gravy with turkey parts that she roasted a few days before Thanksgiving.

Also, she made the Bolognese with ground turkey and pork, rather than the usual beef or veal.  For the pasta, Michele used imported mezze maniche, which are something like small rigatoni.  Additional brown turkey gravy was served to moisten the bird and stuffing.  With it, we had roasted sweet potatoes, fennel, rutabaga and buttered broccoli, as well as Michele’s fig and cranberry mostarda.

We started as always with Champagne

Billecart-Salmon (Magnum) Blanc de Blancs 1981 (Mareuil-Sur-Ay) made from 100% Chardonnay. The Champagne was showing its age but it was drinkable and enjoyable.

Fiano Di Avellino DOC 2000 made from 100% Fiano Selezione Erminia Di Meo. The late harvest grapes were selected from a particular family parcel. There is a prolonged maceration with the skins at a low temperature followed by soft pressing and controlled temperature fermentation. A year after the harvest the wine remains in stainless steel with the “fecce fin” for 13 more years before release. This is an exceptional Fiano. Even though it was a 2000, everyone believed it needed more time to open up. 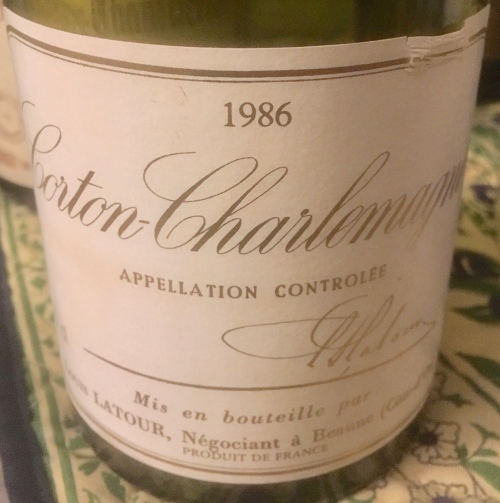 Corton-Charlemagne 1986 made from 100% Chardonnay Louis LaTour. The soil is stony limestone and the vines are 30 years old. Harvest is manual. Traditional fermentation in oak barrels with complete malolactic fermentation. The wine is aged for 8 to 10 months in medium toast new oak barrels.The wine had a hints of honey, dried fruits and an herbal note.

Gevrey-Chambertin “En Pallud” 1985 (Magnum) Domaine Maume. Made from 100% Pinot Noir. The vineyard is .63 hectares and the vines are 70 years old, the soil is clay and limestone. The clusters are 100% destemmed. The wine is aged for 18 to 20 months in mostly older barrels and is bottled without fining or filtration. This for me was the wine of the evening and I was very happy it was a magnum!

Barolo “La Serra” 1978   Marcarini made from 100% Nebbiolo This wine was produced when the legendary Elvio Cogno was the wine maker. This is a classic Barolo with flavors and aromas of faded roses, licorice, tar, tobacco and a hint of cherry. 1978 was an excellent vintage for Barolo.

Chateauneuf-du-Pape  1978  Chateau de Beaucastel made from 30% Mourvédre, 30% Grenache ,10% Syrah, 10% Counoise and 20% other permitted varieties. The grapes are hand picked and only the best grapes are kept and vinified. After a total de-stemming, the wine is traditionally vinified in temperature controlled vats for 15 days an then aged in oak barrels. This is a full bodied mature wine with hints of blackberries, blueberries, violets and a touch of pepper. 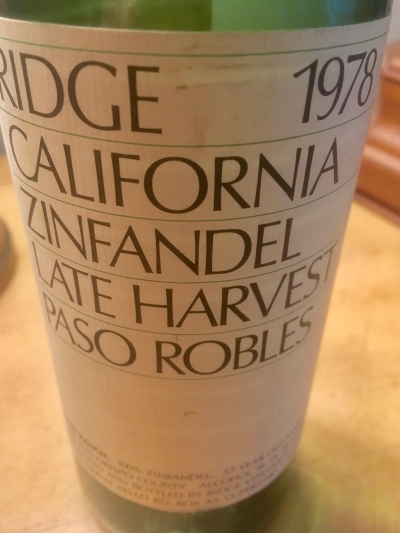 Late Harvest Zinfandel “Paso Robles” 1978 made from 100% Zinfandel from the Dusi vineyard. Ridge. The Benito Dusi Ranch is the only Ridge vineyard source south of the San Francisco Bay area. The vineyard was first planted in 1923 and was only planted with Zinfandel. Ridge started using this vineyard to make wine in 1967. Destemmed and fully crushed grapes vinified on native yeasts are sent to tanks for submerged cap fermentation for 11 days. This is followed by full malolactic on the natural occurring bacteria; oak from barrel aging; minimum effective sulfur. There is pad filtering at bottling. This is a wine with fruity aromas, with hints of black cherry and other black and red fruits with a touch of prune and spice.

Back in the 1980’s I brought a case of this wine in this vintage. If I knew it was going to last this long I would have brought more. It was showing almost no sign of age and it was like I remember the wine from 30 years ago.

We had it with the cheese.

Grappa con Erbe Serafino Levi – this was a special treat because grappa made by Romano Levi is my favorite and I only had the Grappa con Erbe once before. Even more so since he passed away several years ago, grappa made by him is difficult to find. He was known as “The Angelic Grappa maker” and was a legend in his own time. The perfect way to end a wonderful evening!