Pensione, Restaurant Wildner  Last time I was in Venice, I posted some pictures on Facebook and a friend, Faith Willinger, who lives in Florence and is a noted cookbook and travel writer saw them. She wrote that I should go to this “fantastic restaurant” and added that “the wine list will blow you away.” She told me to ask for Luca Fullin, the son of the owner, who is responsible for the wine list. With a recommendation like this, we just had to go.

The restaurant is right on the Grand Canal and there is a covered patio for outdoor dining. We introduced ourselves to Luca and told him that Faith had highly recommended the restaurant. As Faith had promised, we had a great meal.

We liked the restaurant so much that we decided to return again this year. I had the mazzancolle, large grilled red shrimp. They were plump and juicy just as I remembered them from last time.

I followed this with the moleche, baby soft shell crabs. They were crisp and full of flavor. I order them whenever I can because their season is very short. 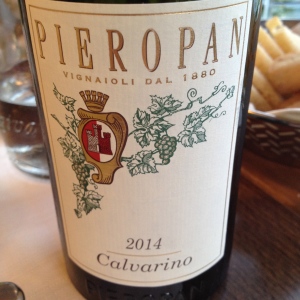 We drank the Soave Classico DOC “Calvarino 2014 Pieropan made from 70% Garganega and 30% Trebbiano di Soave from hillside vineyards in the Soave Classico zone. Volcanic soils situated at 200 to 300 meters facing northwest. Traditional pergola Veronese trained, 3,000 vines per hectare. The vines are 30 to 60 years, hand harvested, often in two harvests to select the ripest grapes. Trebbiano di Soave is picked in mid September and the Garganega in October. The grapes are de-stemmed and crushed with the free run juice fermented separately in glass-lined cement tanks. The wine remains in the tanks on the fine lees for one year. It is aged in the bottle for a few months before release. 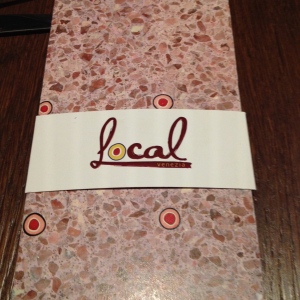 After dinner Luca suggested we visit his new wine bar called Local just around the corner, 3 minutes away. This being Venice it only took us 15 minutes to find it. But we liked its cozy appearance and contemporary style. Benedetta, Luca’s sister, welcomed us warmly.

They have a very extensive wine list and we ordered the Cerasuolo d’ Abruzzo, which is a Rose from Emidio Pepe 2014 vintage made from 100% Montepulciano d’Abruzzo . The grapes are vinified as if it was a white wine and are pressed by foot. The must is fermented without the skins. We had the 2012 last time at Wildner and it was much lighter in color but with this very “natural” winemaker, one never knows.

We had this with a plate of assorted cheeses and condiments from the Veneto area.

For lunch the next day we went to the highly recommended Trattoria Antiche Carampane, not far from the outdoor fish market. This is a lovely restaurant and it is better to go for lunch because it is very crowded for dinner.

and fried moleche with fried Jerusalem artichokes cooked to perfection.

We also loved our desserts, which included a layered meringue, cream and berry parfait. I had something equally delicious, but ate it so fast that I can’t remember what it was.

Single vineyard with chalky, clay soil situated at 200 to 300 meters, facing southwest. Spur pruned cordon trained with 5,000 vines per hectare. The age of the vines is 10 to 50 years. Grapes are handpicked at the end of October, often in two harvests to select the ripest grapes. The grapes are de-stemmed and crushed followed by a short maceration with skin contact in 2,500 liter barrels. After fermentation the wine is racked into 200 to 500 liter barrels and ages for 15 months on the fine lees and remains in bottle for a time before release. It was interesting to taste the two wines one day apart.  Both  Pieropan wines were excellent but the La Rocca is a bigger wine and needs more time.

We also drank the Trebbiano d’Abruzzo 2011 Eduardo Valentini 100% Trebbiano. The wine is aged in large botti of Slavonian oak for 24 months. This was a very complex full wine with a mineral character, hints of citrus fruit and apple, good acidity, great finish and aftertaste with that extra something that is difficult to describe.

As we approached Venice by water taxi I was struck once again by how magical and dream-like this ancient city is with its picturesque canals, graceful bridges and beautiful architecture.

The taxi docked right beside a café and restaurant that looked as if it would be an ideal spot to have breakfast called the l’Ombra del Leone. When we returned the next morning, the place was empty although the outdoor seating was the perfect place to watch the gondolas participating in the celebration of the Festa e Regata della Sensa, an annual event. Among the boats was an ornate one called the Bucintoro used by the Doge, the leader of Venice. The mayor, replacing the Doge of old, throws a gold ring overboard to symbolize Venice’s marriage to the sea. Yes, Michele and I agreed as we sipped cappuccino and ate our cornetti, Venice is a magical city and full of surprises around every corner.

The Restaurants We Enjoyed

Ai Gondolieri is a meat lover’s restaurant in a city surrounded by water and known for its seafood. The restaurant began as an old inn where locals could go to eat simple meats, drink a glass of wine and play cards. Today it has become a refined, quiet restaurant with excellent service and food. I had perfectly fried zucchini flowers to begin and then slices of calf’s liver on Venetian polenta, which was wonderful.

With dinner we had a wine that I have been drinking for many years, the Villa Capezzana Carmignano 2008 DOCG made from 70% Sangiovese, 20% Cabernet Sauvignon and 10% Canaiolo.

The hillside vineyards are at 150 to 200 meters and the exposure is south, southeast and southwest. The soil composition is shale and the harvest is in mid September. Vinification is in steel tanks and the wine is aged in 25HL Allier barrels for 10 months. It remains in bottle another 3 months before release.

Pensione, Restaurant Wildner  I posted pictures of Venice on Facebook while we were there and a friend, Faith Willinger, who lives in Florence and is a noted cookbook and travel writer saw them. She wrote that I should go to this “fantastic restaurant” and that “the wine list will blow you away.” She added that we should ask for Luca Fullin, the son of the owner who is responsible for the wine list. With a recommendation like this we just had to go. The restaurant is right on the Grand Canal and there is out door dining.

Pasta with Zucchini and Zucchini Flwers

We introduced ourselves to Luca and told him that Faith highly recommended the restaurant to us.

We discussed the extensive wine list and I found a wine I had never had before from one of my favorite producers, the Cerasuolo di Abruzzo Rosato which is a Rose from Emidio Pepe 2012 vintage made from 100% Montepulciano d’Abruzzo . The grapes are vinified as if it was a “white wine” and are pressed by “foot” and the must is fermented without the skins. It was one of the best Rose wines that it has ever been my pleasure to drink.

The wine was an excellent combination with pasta with zucchini and zucchini flowers to start followed by seppie (cuttlefish) in a black ink sauce and peas with grilled polenta.

Fiaschetteria Toscana This restaurant began as a Tuscan wine shop where products from Tuscany were sold. It later became a trattoria and in 1983 a restaurant. Michele and I have been coming here for a number of years.

It has a very nice dining room and two upstairs rooms for larger parties and outdoor dining in a small piazza just across the street. I ordered the moleche, which are baby soft shell crabs. They were crisp and full of flavor and I order them whenever I can. We ended with Michele’s favorite, wild strawberries with crema gelato.