After I made reservations for Naples and Rome, I was invited to the Anteprima Amarone Valpolicella Tour in Verona. It would mean I had only one week between trips!

I decided to attend anyway. Verona is a fascinating city, the food is very good and then there is the wine. I would be able to taste the wines of Valpolicella, visit the wineries and speak to the producers again at the dinners. When one has the opportunity to visit Italy, one goes.

The Consorzio per la Tutela dei Vini Valpolicella, founded in 1924, sponsored the event. The members include viticulturists, winemakers and bottlers from the Valpolicella wine production zone, a territory that includes 19 municipalities in the Verona area. Over 80% of the producers are members.

I received a listing of over 80 wineries that I could choose from to visit. On Tuesday, Wednesday and Thursday, I visited 10 Wineries: Bolla, Bertani, Villa Canestrani, Villa Crine, Vigneti di Ettore, Roccolo Grassi, Massimago, Fidora, Cantina di Soave and Marco Mosconi.

The Valpolicella appellation is located north of Verona. It borders Lake Garda to the west and is protected by the Lessini Mountains to the east and north. It covers the Verona foothills area, which is part of the eastern Alps. The vines are traditionally pergola-trained according to the typical “pergola Veronese system.”

The main grapes are Corvina, Corvinone and Rondinella and to a lesser extent Molinara. All of them are strictly indigenous and found only within the Verona province.

On Friday night there was a dinner with all the participating wineries. I could choose the wines that I wanted with dinner and had a chance to speak to the producers at my table.

On Saturday morning there was a blind tasting of the 2013 Amarone with sommelier service. There were about 80 wines, both barrel samples and those already bottled.   After the tasting, representatives of the participating wineries gathered in another room with their wines and I was able to taste any of the Amarone wines that I missed.

It was a very interesting and informative event and I am glad that I went. For me the highlight was tasting a broad range of Amarone, one of Italy’s great wines.

Next time I will report on the wineries I visited.

Amarone and Turkey for Thanksgiving

Often I am asked which wine I drink with Thanksgiving dinner when I have turkey and all the trimmings. There are, of course, many different choices that can work very well but if I had to chose one it would be Amarone.
Amarone can be expensive but it has warm aromas and flavors that make it perfect for the colder weather and all the different dishes that accompany the turkey.
Here is one Amarone that I like a lot.  You can see by how it is made why it would work for Thanksgiving.

Amarone Della Valpolicella DOC 2007 Tenuta Santa Maria alla Pieve made from 75% Corvina, 10% Rondinella and 15% Corvinone. The training system is the pergoletta and there are 5,600 vines per hectare. The grapes are hand harvested and placed in wooden trays inside rooms with well-circulated air for 4/5 months. In the middle of January after reaching their desired sugar content and losing 25%/30% of their weight, the almost raisin-like grapes are pressed and fermented for 25/30 days at controlled temperatures with daily pumping over.  After a period of decantation and refining in French barriques and Italian oak tonneaux malolactic fermentation takes place.  After 48 months the wine is bottled and remains for 6 months before release. It is a complex and elegant wine with hints of dried cherries, prunes and spice. The finish is very long and there is a lingering aftertaste. $75

The families’ tasting this year was called “Amarone:  the Gentle Giant Awakens.”  The spokesperson was Sandro Boscaini, owner of the Masi Winery, who I know and respect both as a producer and for his knowledge of Amarone.  Sandro made a few opening remarks about the “Families” and Amarone in general and went on to discuss how Amarone is produced.

He said that the weather during the drying of the grapes (appassimento) is just as important as the weather during the vintage.  The colder the weather, the better it is for drying the grapes. The grapes used for Amarone are thick skinned and can take a long drying period. This longer winter drying makes the resulting wine more concentrated. Only after the drying period takes place do they know if the juice is good enough to be made into Amarone.  Amarone is only made in the best vintages. Most of the producers try to avoid the formation of botrytis on the skins of the grapes. Of the 12 producers, only Sandro said that 2% of his grapes had Botrytis.  He did say however that he felt a touch of Botrytis might be present in the grapes, especially the Corvina, which may not be detected.

This was a very interesting seminar because it covered vintages between 2007 and 1988.

Amarone Della Valpolicella Classico “Vignetto Monte Sant’Urbano D.O.C. 1988 Speri made from 65% Corvina Veronese, 25% Rondinella, 5% Corvinone, 5% Molinara and other indigenous varities. The vines are 19 years old and the vineyards are at 280-350 meters. Manual selection of the best bunches the first week of October. The grapes were dried for 120 days on racks in the fruit drying rooms of the Monte Sant’Urbano estate where there are ideal conditions of temperature, humidity and ventilation. The grapes lost 40% of their initial weight and pressing took place at the end of January 1989. Fermentation took place in large oak barrels. There was no signs of Botrytis. The wine was aged in 50hl Slavonia oak barrels for 4 years, 10% new, and refined in the bottle.  Weather conditions were very good and1988 is considered an excellent vintage. It is a full, complex wine that still has aromas of ripe fruit with hints of cherries, dries figs and a touch of hazelnut. The retail price is $300 and there are about 60 bottles left.

Amarone Della Valpolicella Classico “Mazzano” D.O.C. 1990 Masi made from 75% Corvina, 20% Rondinella and 5% Molinara.  About 2% of the Corvina was affected by Botrytis. Average age of the vines is 24 years and the vineyards are at 305/415 meters.  In the beginning of October the best clusters from the hillside vineyards are selected and laid in wooden boxes or on bamboo racks in large rooms in an old farmhouse in the hills until the middle of January. There are large openings and windows to allow the free flow of air that is vital to the drying process.  Sandro Boscaini said that the grapes lose 35/40% of their weight and have enhanced flavor as well as a high concentration of sugar. The grapes were affected by botrytis. He said it was an outstanding vintage for Amarone. This is an elegant wine, balanced with dry fruit aromas of prunes and figs and a touch of leather. $300 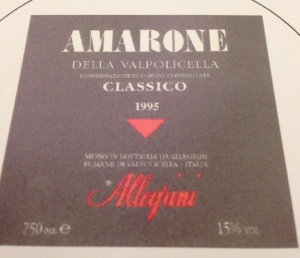 Amarone Della Valpolicella Classico D.O.C. 1995 Allegrini made from 75% Corvina Veronese, 20% Rondinella and 5% Molinara. The vines are 24 years old and at 250 meters. Hand harvested the second week of October. The ground was dry and there was no rain, so there was no risk of mold of any kind. The grapes were dried naturally on bamboo/straw-lined racks in the drying lofts for 3 months losing about 45% of their original weight.  Pressing took place on January 10.  The wine was fermented and aged in Vosges and Cher oak casks of different sizes for 36 months. Aging in the bottle for 18 months followed blending. This is a highly structured complex and well-balanced wine that will last for a number of years. Not for sale by the winery. 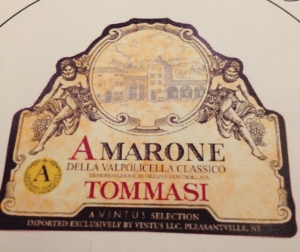 Amarone Della Valpolicella Classico D.O.C. 1997 Tommasi made from 50% Corvina, 15% Corvinone, 30% Rondinella and 5% Molinara. The vines are 40 years old and are at 220-260 meters. Selection of the grapes to be dried took place on September 18/October 7. After 5 months of drying with total control of the humidity, pressing took place on February 7.  Fermentation was in stainless steel tanks for 30 days.  Aging was in Slavonian oak barrels of 35hl for 36 months.  This is a concentrated wine, elegant and smooth, with long aging potential. $150 if it was available.

Rondinella, 5% Osteleta and 5% other local grapes. The vines are 30 years old and are at 150/200 meters and the harvest was by hand starting on September 3, 2003. Drying takes place in a fruit drying facility where the temperature is controlled (cold temperature process) as well as the ventilation and humidity The grapes are dried for 90 days and lose about 40% of their weight.  This increases the sugar content and changes the extract and flavor. Pressing of the grapes began on December 1, with a roller /crusher.  The grapes were not destemmed. Fermentation in temperature controlled stainless steel with the tanks with periodic pumping over.  Fermentation and maceration lasts for about 45 days. The wine is aged in 25hl four year old Slavonian oak barrels for about two years. The wine was filtered and remained in the bottle for 8 months before release. While 2003 was not expected to be a great vintage Sabrina Tedeschi said that for them it turned out to be an excellent vintage and she expected the wine to have a long life. This is a balanced, complex wine with jammy fruit and hints of chocolate, pepper and a touch of balsamic. The current vintage of this wine is $75

Amarone della Valpolicella Classico Riserva “Sergio Zenato”  Zenato 1998 D.O.C. made from 80% Corvina, 10% Rondinella, 5% Sangivese and 5% Molinara. The age of the vines is 20 years and the vineyards are at 300 meters. The grapes are picked by hand and left to dry in the fruttaio (drying room) for 3 to 4 months in small trays with only one layer of grapes, well spaced to allow for good air circulation. The grapes are pressed in December/January.
Fermentation and skin contact is for 15/20 days and then the wine is aged in big Slavonian oak barrels for 48 months. The wine is aged in bottle for one year before release. The wine has aromas of dried ripe fruit with hints of liquorice and spice. The wine is drinking very well now but could last for a number of years.

One of my favorite wines to pair with the turkey and everything that goes with it is Amarone. The Amarone Families” make Amarone at different price points so you could find one for about $40. A wine not as big but with some of the same tastes as Amarone is the Valpolicella Ripasso which is less expensive and would also go well with the turkey

MICHELE AND I WILL BE DOING A REGULAR FOOD AND WINE SEGMENT ON WNYC-TV CHANNEL 25 STARTING THIS SATURDAY AT 11:00 PM AND REPEATED ON SUNDAY AT 1:00 PM FOR i.ITALY| NY.  THE SHOW DEALS WITH EVERYTHING ITALIAN IN THE NYC AREA