I drink Grappa all year long but as the weather turns colder and the holiday seasons is under way I tend to think of Grappa more often. 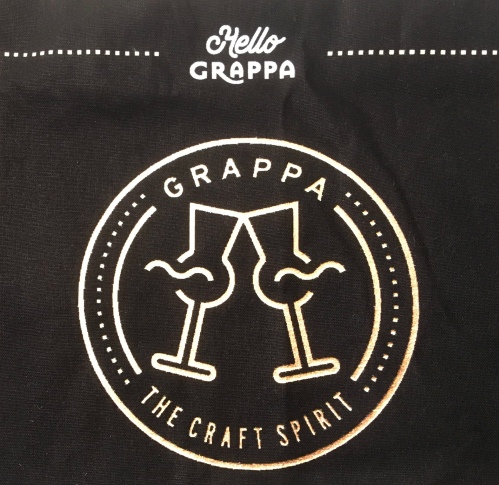 While writing on another subject I came across a number of pictures of my last “Hello Grappa” trip that I wanted to share.   As I looked through my photos, I sipped a glass of grappa and enjoyed a grappa brownie that Michele had made. For more on Grappa see Hello Grappa, Distilleria Marzadp,  Grappa Cocktails

The first stop  was the Bonollo distillery near Padua (Trento)

Elvio Bonollo after the Grappa tasting

Bonollo- The vinaccia, after it has been distilled. 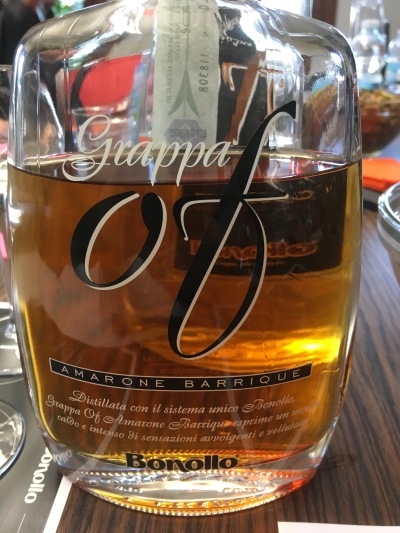 Tasting Grappa with another Grappa lover Tom Maresca at Bottega 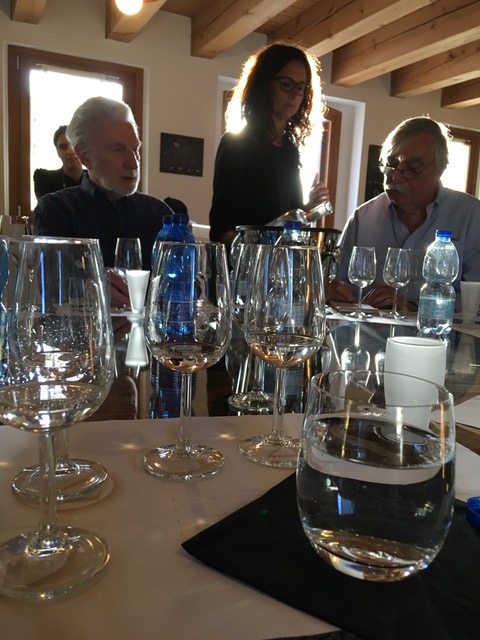 Lisa Tosolini giving us a tour of the distillery 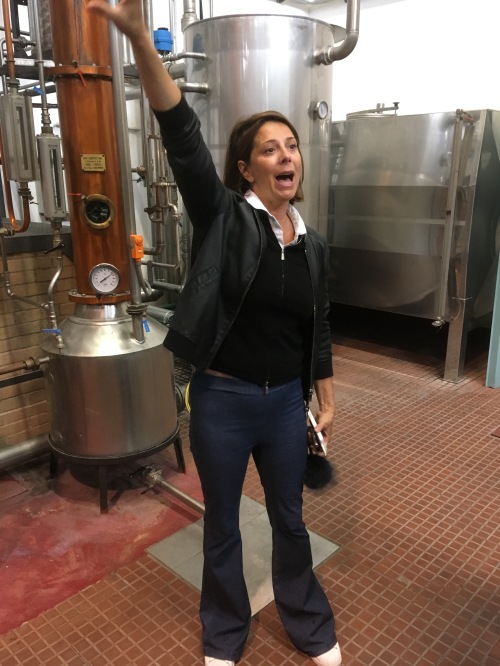 Most of the barrels have been signed by visitors to the Distillery. Michele had been here on another press trip but could not find the barrel she signed the first time so she signed another barrel.

I even signed a barrique! 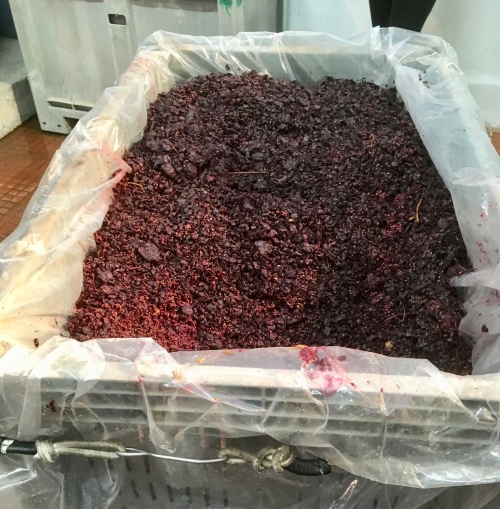 The vinaccia (must) going into the still

Individual tasting sheets for the tasting conducted by Lisa, very interesting and informative. 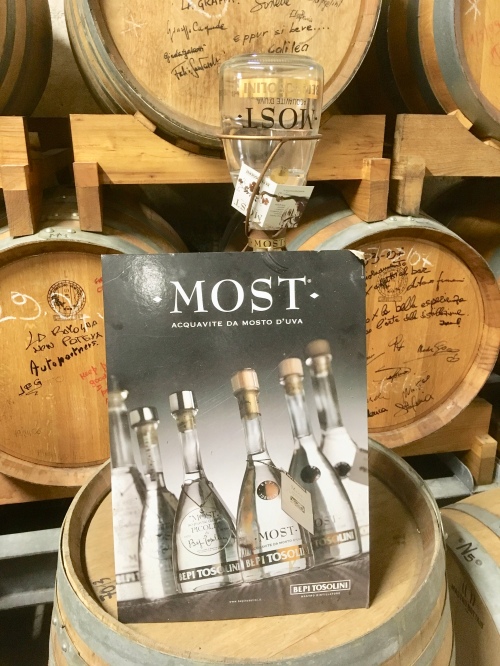 We also tasted a unique Smoked Grappa, almost like an island scotch

Next stop was the Castagner Distillery in Treviso (Trento) 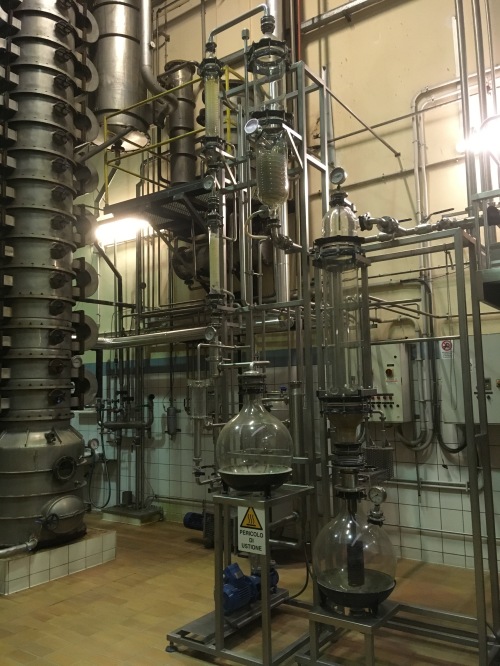 It is all done by computer

Giulia conducted a  tasting for us of a number of Grappas 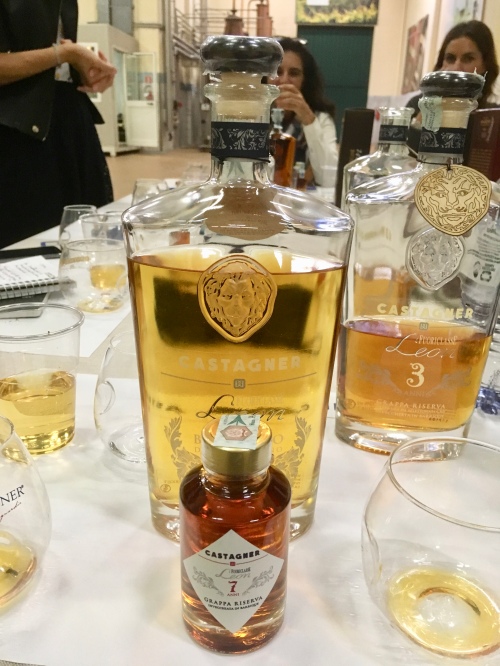 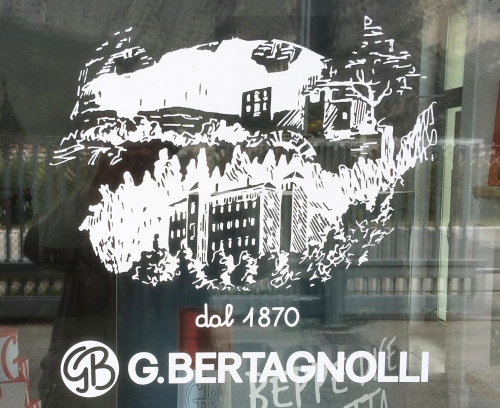 Stefano Pederiva, the export manager explained how grappa is made 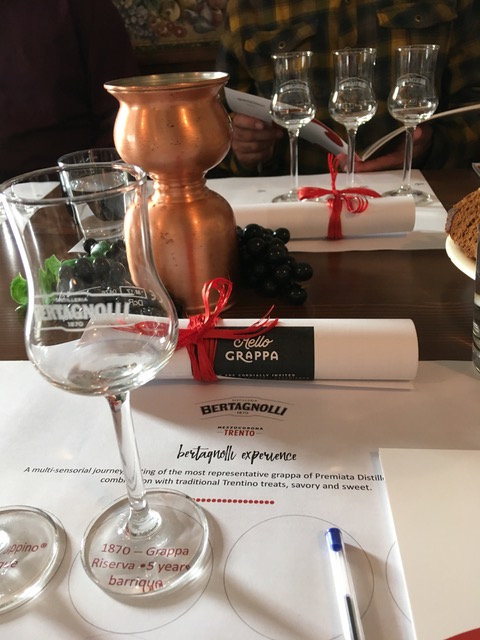 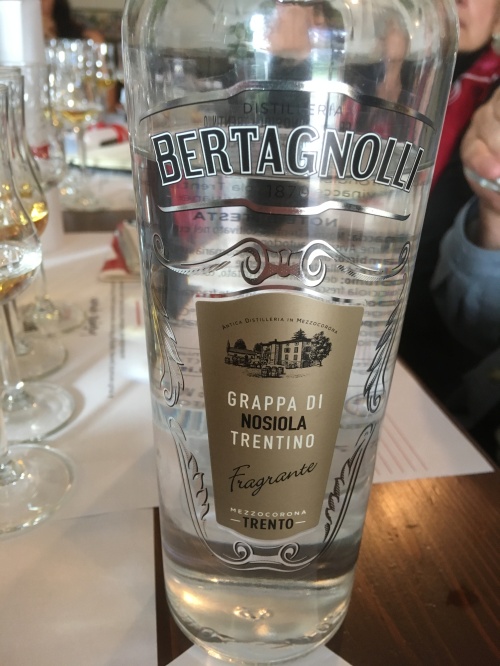 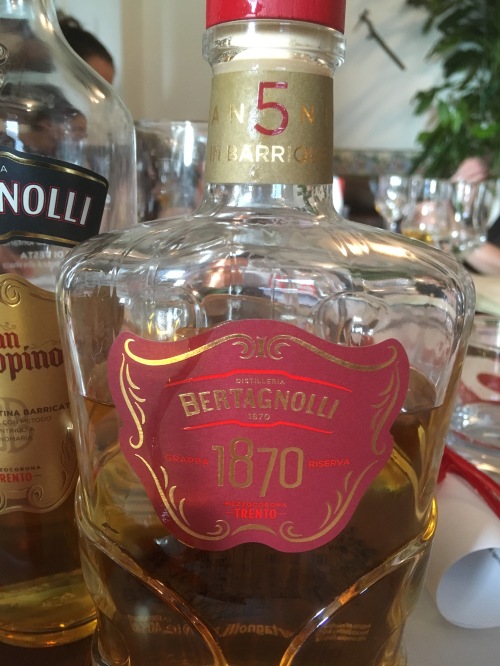 Grappa at its Best

I have been a grappa drinker since the first time I went to Italy in 1970. I generally enjoy grappa after meals, but I also like it in espresso (caffé corretto), drizzled on Italian ices, in a fruit salad, with chocolate, etc.

Grappa tastings don’t typically include dinner so I was intrigued to receive an invitation to a grappa tasting dinner. When I arrived at the restaurant to meet the host, Michele Dolzan, General Director of the Villa de Varda Distillery, I found him seated at a table covered with grappa bottles.

Located in the small town of Mezzolombardo in the region of Trentino, the Villa de Varda Distillery is situated on the Piana Rotallana, a wide, highly fertile, well drained alluvial plain crossed by the Adige River and the Noce Stream at the foot of the Alps.

Michele said that it is a family owned distillery and they grow their own grapes (except for the Amarone grappa). The vines are cultivated using the pergola system.

Once Michele started talking about his grappa, I understood how knowledgeable and passionate about grappa he is and how very proud of the distillation method developed by his father Dr. Luigi Dolzan.

He explained in detail his father’s method, known as the de Varda Method, for the distillation for Italian grappa. There are four steps:  Selection of Raw Materials: carefully selected marc derived from the soft pressing of a single grape that has been picked from soft, fresh bunches still dripping with must.

Fermentation of the Must: conducted right after the marc arrives at the distillery. It takes place under controlled temperatures with select yeasts and enzymes.

Distillation: conducted slowly in exclusive discontinuous pot-stills where the “heads and tails” are eliminated, allowing the volatile components responsible for each grappa’s flavor to undergo evaporation and consequent condensation that enables the grappa to fully maintain the typical characteristics of the Trentino grapes.V

Maturation: the grappa remains in steel casks for at least 6 months. For a grappa to be considered Riserva Trentina it must spend more than two years in oak. Then the alcohol is reduced and the final spirit is refrigerated and filtered.

Grappa Pinot Grigio (I Monovitigni) 100% Pinot Grigio pomace. Michele referred to it as traditional grappa, because it is crystal clear. This is a fresh clean grappa, well balanced with nice fruit and aromas of ripe pears, peach and citrus notes. On the palate it is well rounded and it has certain smoothness but is unquestionably grappa! 373 ml $49.9

Grappa Moscato (I Monovitigni) 100% Moscato pomace Traditiona grappa. It has typical aromatic aromas of the Moscato grape with hints of orange blossom, apricot and a touch of pineapple. Michele Dolzan said that this may be the best grappa for “beginners” because it is so aromatic.” 375 ml $49.99 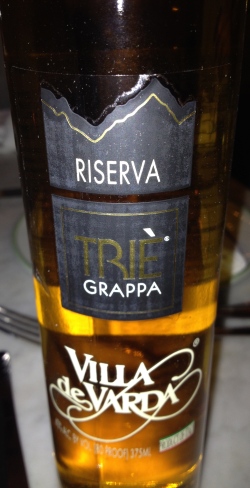 Triè Grappa Riserva made from Teroldego, Pinot Bianco and Muller Thurgau pomace. It is aged for a minimum of 36 months in medium toasted 225 liter French oak barrels, and then the lots are blended together. It has hints of dried fruits, plum, and wild flowers. 375ml $49.99 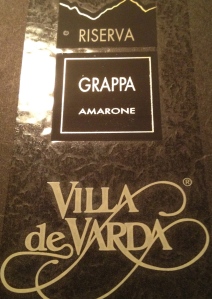 Grappa Amarone Riserva made from Corvina, Molinara and Rondinella from vineyards in Valpolicella. Mr. Dolzan said that the pomace for this grappa is from the dried grapes used to make Bertani Amarone. The grappa is aged for a minimum of 3 years in medium toasted 225-liter French oak barrels, and then the separate lots are blended together. It has hints of flowers and fruits with a touch of almond. 375ml $59.99

Grappa Amarone Stravecchia (Alta Selezione)  Michele said this is a special and limited selection 750ml in a fancy glass bottle with a wooden box. The skin/grapes are careful selected. This grappa is aged for 5 years in barrels that previously held Bertani Amarone. This is a very impressive grappa, smooth, well balanced with hints of almonds flowers, dried fruits and a touch of coffee.

Michele did not pour the grappa from the bottle but used a “wine thief” because he did not want to disturb the grappa. $249.99

I like grappa. I often drink it after a nice meal as a way to relax and to help me to digest. I put a few drops in my espresso, for what Italians call caffè corretto. I drizzle grappa on my lemon granita and other flavored ices and even have it with chocolate. A number of years ago Michele and I wrote and article for Gourmet Magazine called “Cooking with Grappa.” The beautiful grappa chocolate cake appeared on the cover of the magazine.

A friend invited me to a wine tasting. When I arrived, one of the wine reps told me that there was a grappa seminar starting in five minutes, would I like to attend. He knew me well enough to know that I would say yes. 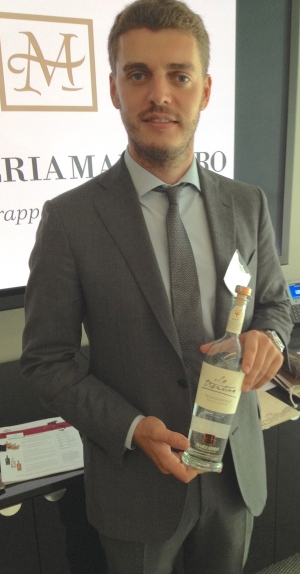 The speaker was Alessandro Marzardo, third generation of the owners of the Marzardo Distillery that was founded in 1949. The distillery is in Bancolino di Nogaredo in the heart of Vallagarina in Trentino. In 2005 they built a new state-of-the-art distillery.

Alessandro said that at one time, grappa was only drunk by farm workers in the cold weather to give them energy before they went into the fields to work. It was a morning drink taken between the hours of 8:00 AM and 10:00 AM. He made the point that grappa was only made by the farmers in Northern Italy. Southern Italy does not have a tradition of grappa because it is too warm. It is only recently with the popularity and often high prices for grappa that wineries in Southern Italy have their grape pomace (vinaccia in Italian) turned into grappa. He said the grappa was first called acqua vita, water of life, and the people of Trentino have always embraced the art of distillation.

There are 45 distilleries that produce grappa in Italy. An Italian wine producer will send his pomace to one of these distilleries to be made into grappa. Pomace is the grape residue left after the first pressing when making wine. It is against the law for a winery to have a distillery on its property. There are over 4,000 grappa labels on the market today.

Up until about 15 years ago all grappa was what Alessandro referred to as traditional grappa, that is, made without being aged in wood. It was clear in color and the flavor reflected the grapes that it was made from. Now many grappas are aged in new barriques and for the most part they are dark in color and in many cases the wood flavor has taken over.

The Marzardo distrillery produces many different distilled sprits and Alessandro said that you must start with the best raw material. Trentino makes great wines so this is not a problem. Knowledge and experience are also needed to produce a great product.

Alessandro said that in the distillery there are 100 days of work, 24/7 from September to December. The freshest selected pomace is distilled each day. The distillation takes place in alembics using the traditional discontinuous bain marie system (steam distillation), which is part of the Trentino culture. He said that the first part of the production called the “head” tastes bad because it contains too much methane (he said it tastes like nail polish) and is therefore discarded. The last part is called the “tail” and contains too many impurities and is also discarded. The discontinuous method produces small amounts of high quality grappa.

The alembics are handmade out of copper and are excellent conductors of heat. Therefore the particular fragrances and aromas of the pomace are enhanced to their maximum. In order to keep everything uniform, the whole system is computerized.

Alessandro pointed out that the continuous process of grappa production in giant stills produces large amounts of grappa. He said that this type of production, which he does not use, produces commercial grappa that is not of a very good quality.

After distillation the traditional grappa is left alone. The grappa that is to be aged is placed in barrels of 225 liter barriques to 1,500 liter barrels made from four types of roasted wood, including oak, acacia, cherry and ash, for two years. Alessandro said they use wood from all over the world but do not use any from America. The new barrels are from a barrel maker who makes barrels for producers of balsamic vinegar. We tasted two different lines of grappa, three in each line. 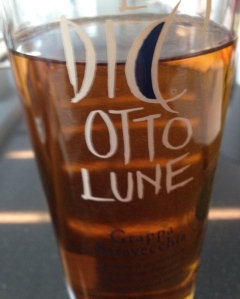 The first grappa was the Le Diciotto Lune Grappa Stravecchio. Italian law requires a minimum of 18 months of aging before a grappa can be labeled stravecchio (old). Alessandro said that this is an aged, high quality Grappa, which is emblematic of the culture, care and art of distilling. It is produced from the best pomace of Trent, from selected vines, and distilled in the typical still. The Grappa is left to refine for 20 months in small cherry, ash, oak and ash casks, each of which lends its characteristic perfume, aroma, color and flavor, to the grappa.

La Trentina “Tradizional” – Grappa Giovane – This is traditional grappa at its best. I really liked this grappa.

Giare “Gewûrztraminer” This was the most aromatic of the grappas- there was no mistaking which grape this was made from.

Giare “Chardonnay” This was a grappa with hints of oak and vanilla.

Giare “ Amarone” This grappa had the most taste with just a slight hint of oak.