Tag Archives: Pizza by the slice

Filaga: Pizza Anyway You Slice It

I am always looking for new pizzerias to try. Liliana Rosano, a journalist I know, recommended I try Filaga Pizzeria Siciliana. She said if I wanted to go she would call the manager and let him know I was coming. I was very interested because their pizza is sold by the slice.  I prefer to order a whole pizza since slices are generally reheated and not very good.  No one seems to care.  I was hoping that this would be different.

Filaga Pizzeria Siciliana is located in the Chelsea market and the afternoon I went it was very crowded by customers buying pizza by the slice. You pay for the pizza and get a number which is called when the pizza is ready.

Salvatore  with the Sfincuni, Valerio with the Margherita and Gabriele with the  Diavola

I was met by Gabriele Lamonaca, the general manager, who is from Rome. He introduced me to the chef/manager Salvatore Gagliardo, from Porto Empedocle, Sicily and the pizzaiolo Valerio Coletta. I do not know if it was because they came from Italy but the passion for what they were doing was unlike any pizza by the slice place I have ever been in. They really cared about the product they were making.

Gabriele referred to the pizza as pizza Siciliana, made with techniques that come from the Roman tradition of Pizza in Teglia–the tradition of square pizza by the slice.

As in Rome the pizzas are displayed and then reheated when they are ordered in a special stone oven.

Gabriele said they use Polselli 100% pure “00” flour. The flour comes from Frosinone a city south of Rome. They make a hydrated dough (about 83%) and the dough is left to rise for 96 hours. He said this produces a light, digestible and crispy dough. Gabriele said reheated pizza is sometimes associated with a low quality product  but this is not true.  Pizza Teglia is supposed to be reheated before it is served. There is extra moisture in the dough and when the pizza is reheated this extra moisture is released to obtain the perfect crunch to the crust.  It is thin-crusted pizza with enough bite to make it chewy.

All of the cured meats and cheeses are imported from Italy, and the produce is local and seasonal. They use Mozzarella di Bufala from Italy for their cheese that they break by hand every day to ensure the perfect texture. Only Italian organic tomatoes are used for the sauce. The extra virgin olive oil is from Puglia.

“Sfinciuni” very typical of Sicily, especially Palermo. It is made from tomato sauce, onions, pecorino and breadcrumbs and it was wonderful.

Spinaci and pancetta with smoked mozzarella.   I had a slice of this one and it was fantastic. 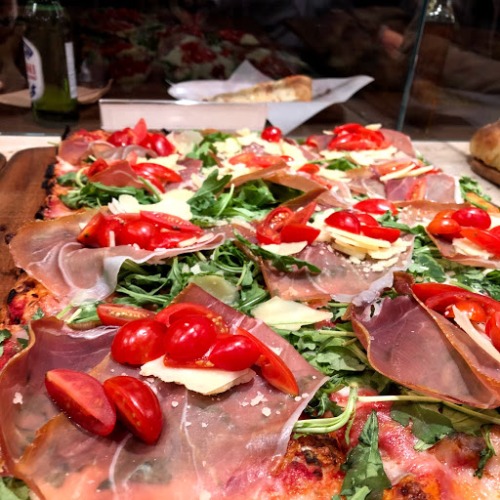 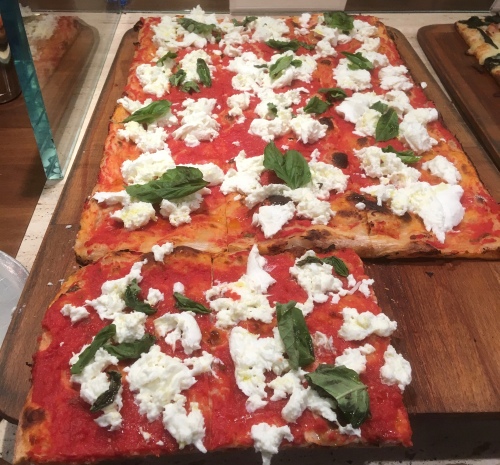 The Margherita  with tomato, bufala mozzarella and basil and tomato, one of my favorites.

I also had the Diavola made with spice salami, tomato sauce, mozzarella which Gabriele is holding in the first picture. 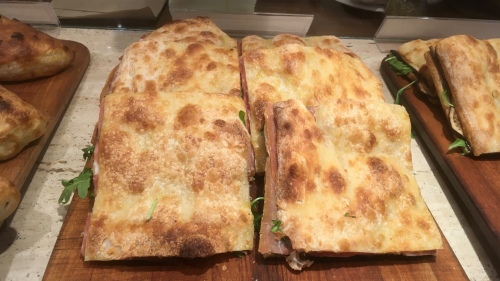 Yes, Filaga is different and it is the only pizza by the slice place I have ever recommended. I look forward to returning soon!

Filaga is a small village not far from Palermo.

Tagged as Filaga, Pizza by the slice