When Michele and I told Lars Leicht of Cru Artisan Wines that we would be spending 3 weeks in Rome, he suggested that we visit Fontana Candida in Frascati, less than 30 minutes away by train.

Two of the white Fontana Candida wines, Vigneto Santa Teresa Fascati Superiore and Luna Mater can age. I had tasted these wines a few years ago and wanted to see how they were holding up.

Mauro Merz, the oenologist and director, whom I had met in NYC, met us at the station and after a short ride we were at the winery. 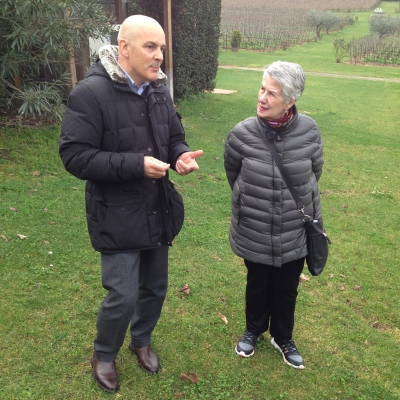 Mauro began by giving us a tour of the vineyards. He said Fontana Candida has 25 hectares of its own vineyards but they also buy grapes from 210 different growers.  Mauro made it a point to say they buy grapes and not juice. In 2005 they started a vineyard-based project to help their growers. They hired a top agronomist and he acted as a consultant to the growers free of charge. Fontana Candida also paid the growers above market price if they produced healthier and more mature grapes.

He said they have two cellars: the vinification cellar at Frascati and the bottling cellar at Monteporzio Catone.

He pointed out a small section of the vineyard where the vines were tied to long stakes in the ground. He said this was the way the vines were trained in the past. It was a good system because you could have 10,000 plants per hectare but because the plants were so close it was easy for disease to spread.

We started with the Vigneto Santa Teresa Fascati Superiore 2014 DOC It is 30% Malvasia Puntinata del Lazio, 30% Malvasia di Candia, 30% Trebbiano Toscano and 10% Greco. The grapes come from a 13-acre vineyard of which seven and a half are planted in Malvasia del Puntinata del Lazio and four acres in Greco. It is in the locality of Santa Teresa, in the commune of Rome. The 30-year-old vines are trained using the cordone speronato system at 985 feet above sea level on soil of volcanic origin with a southern exposure. Mauro called it a “light soil that looked like talcum powder”. They are not allowed to irrigate so the roots of the vines have to go deep to find water.  Mauro said that 2014 was a difficult vintage because there was a lot of rain and humidity. There is a selective picking of the different grape varieties according to the rate of ripening. Malvasia was picked first, followed by the Greco and then the Trebbiano. The Trebbiano and Greco were gently pressed followed by a classic white wine vinification. The Malvasia was cold fermented on the skins for 12 hours. After a natural clarification the must was fermented with selected yeasts and left to rest in temperature controlled stainless steel tanks until bottling in early spring. Mauro called this an elegant wine. The wine had white peach aromas and flavors and a hint of apple and smoke. It has good mineralogy, acidity and a finish and aftertaste of almonds.  At the moment this wine is no longer imported into the U.S because of a dispute over the name.

Luna Mater Frascati Superiore DOC 2014, Fontana Candida Made from 50% Malvasia di Candia, 30% Malvasia del Lazio, 10% Greco and 10% Bombino. The grapes are grown in selected hillside vineyards ranging between 650 and 1,300 feet in the communes of Frascati and Monteporzio Catone.  The volcanic soil is loose, porous and dry but not arid. Spalliera, Guyot and Cordone Speronato training systems are used.

First, selected bunches of mature grapes are picked by hand. Then the best grapes from each bunch are chosen. The grapes are transported in small baskets directly to the cellar so that they will be in perfect condition when they arrive.

The vinification of the grapes for the Luna Mater is a process that they invented and takes place in three different stages. In the cellar the grapes are separated into two batches. This is called the “modern” stage. The first batch is cooled immediately prior to a gentle pressing to ensure maximum aromatic qualities. The second batch is destemmed, cooled and fermented in contact with the skins to produce a marked varietal character. This is done without oxygen to keep the grapes fresh. After 6-7 days the skins were removed, any longer than this and there would be too much extract.

Three days later a small quantity of the best grapes are destemmed by hand and added whole to the fermenting must with their own natural yeast for bouquet and flavor. The berries remain in the must until the end of February.  The alcohol helps extract tannin from the skins and pits. The wine is aged in 10HL acacia wood barrels, which may be the best wood for the Malvasia grapes. The barrels are not toasted and were steam folded.

Mauro  feels  barriques do not give him the type of wine he wants to produce and they are not traditional.  The wine is left to age in bottles laid horizontally in the ancient tufa tunnels under the Frascati hillsides.

Luna Mater means Mother Moon; it reflects the wine’s close ties to nature and the 50 old vines that are used to make this wine. It has floral aromas with hints of white peach and honey with bitter almond in the finish and a very pleasing aftertaste.

The first vintage was 2007 and it was vinified and aged in stainless steel and some toasted barriques.

Luca took us to Locanda Dello Spuntino in Grottafretto for lunch. We drank the wines with an assortment of antipasti and typical pasta dishes.