As with the Master Class on white wines that I wrote about last week,   https://charlesscicolone.wordpress.com/2017/09/21/touring-the-veneto-with-vignaioli-veneti/    Kerin felt that these reds were examples of the diversity of wines made by the member wineries of Vignaioli Veneti and in the Veneto in general. The wines were divided into two flights. 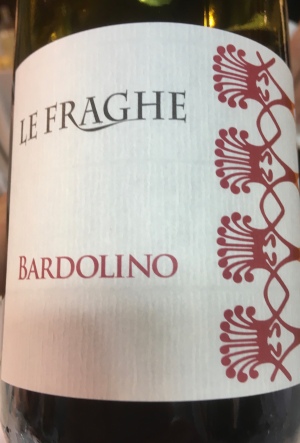 La Fraghe Bardolino 2016 made from Corvina and Rondinella vinified separately. Maceration lasts for 7 to 8 days and coincides with the fermentation period. The cap is managed daily, with a délestage in the morning and a pump over in the evening. Malolactic fermentation usually occurs in the following month. The wine is aged in stainless steel tanks for 3 months. 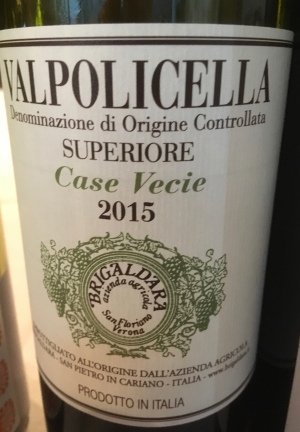 Brigaldara Valpolicella Superiore “Case Vecie” 2015 made from 40% Corvina, 40% Corvinone, 20% Rondinella. The must is left in contact with the grapes during the whole fermentation process. Pumping over is carried out twice a day and délestage is carried out half way through the fermentation process. The wine is aged in 25HL Slavonian oak for 1 year.
In response to a question about Rondinella, Kerin said that one of the reasons it is used in the blend is because it is resistant to mold.

La Fontanina Valpolicella Valpantena Ripasso Superiore DOC 2015 made from 60% Corvina and 40% Rondinella. Parts of the grapes harvested are immediately pressed while some are placed in wooden boxes for a light drying period of 15 to 20 days. Key lots of grapes are vinified separately for fermentation: partially in stainless steel tanks while the semi-dried grapes go into wooden barrels. The wine is aged for 10 to 12 months in tank and 5 to 6 months in bottle before release.

Ottella Valpolicella Ripasso “Ripa Della Volta” 2014 made from 70% Corvina, 20% Corvinone, and 10% Oseleta, Spigamonte, Corvina and Turchetta. Fermentation in temperature controlled steel vats and the “wine” is passed over the Amarone marc for about 10 days. The wine is aged in 25 HL Slavonian oak barrels and French barriques for about 2 years. Michele Montresor, President of Vignaioli Veneti, owns this winery. 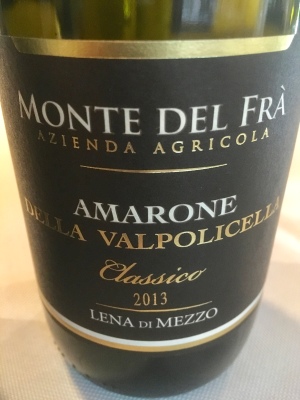 Monte del Fra Amarone della Valpolicella Classico DOCG “ Lena di Mezzo” 2013 made from 80% Corvina and 20% Rondinella. The grapes are picked just after they start to dry on the vine. The grapes are then dried for 90 to 120/130 days until the sugar in the grapes reaches at least 28% to 30%. Gentle crushing and destemming of the grapes, depending on the vintage, between the end of January and late February. Fermentation is in small, temperature-controlled truncated cone-shaped stainless steel vats and is started by indigenous yeasts. The fermentation is a slow one, with long maceration on the skins. 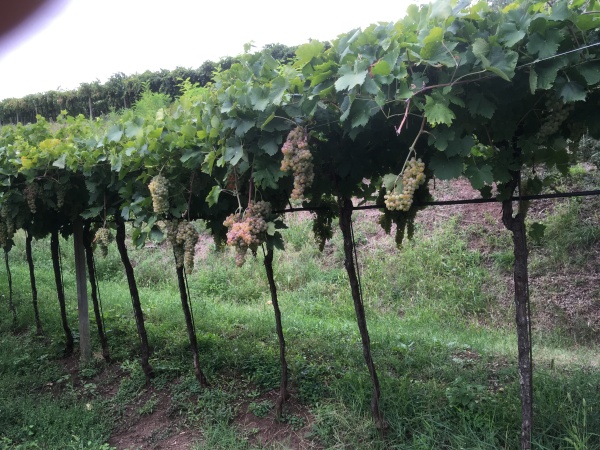 Kerin pointed out that most producers kept the old training system, the pergola (pergola Trentina, pergola Veronese and Pergoletta, which protect the grapes from getting too much sun and has a high yield) and for new plantings used the guyot training system. A few producers still use the pergola system for all their vines. Using both systems protect the final product if the weather is too cool or too hot.

Allegrini Amarone della Valpolicella DOCG 2013 made from 45% Corvina Veronese 45% Corvinone, 5% Riondinella and 5% Oseleta. Grapes are hand harvested in September. The grapes are naturally dried for 3 to 4 months in the drying facility. The grapes lose 40% to 50% of their original weight. Destemming and soft pressing takes place in January and fermentation is in temperature controlled stainless steel tanks at 46 to 72 degrees F. Fermentation lasts for 25 days with periodic pumping over. The wine is aged in oak for 18 months, and then blended together for 7 months. 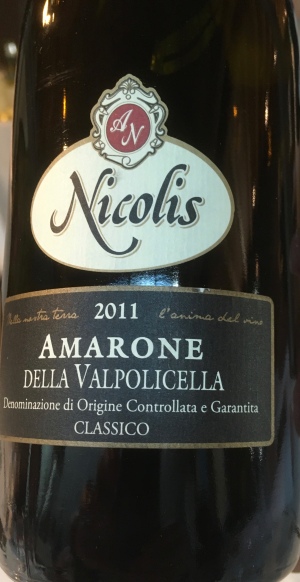 Nicolis Amarone della Valpolicella DOC Classico 2011 made from 65% Corvina, 20% Rondinella, 5% Molinara and 10% Croatina. The grapes are placed in special dry, well-aired rooms, to dry naturally, then the semi-dried grapes are softly pressed. Due to the low temperature, the fermentation process is long and slow. Maceration takes over a month. The wine is then aged in medium sized Slavonian oak casks, where it continues to ferment and where it remains for about 30 months. At least 8 months in bottle before release. Kerin said that 2011 was a very hot vintage but this wine is very well balanced.

Kerin pointed out that even though Molinara is longer mandatory in the blend it is still used by some producers.

Secondo Marco Amarone della Valpolicella Classico DOCG 2011 made from 45% Corvina, 45% Corvinone and 10% Rondinella. The training method is Pergoletta. There is a long natural drying process for around 120 days and the weight loss is 50%. Prolonged pre-and post-fermentation maceration, indigenous yeast, malolactic fermentation and fining in concrete vats. Then long aging in wood and long maturation in bottle before release.

These last two wines were a pleasant surprise for the journalists and many of them said that they reminded them of old style Bordeaux. 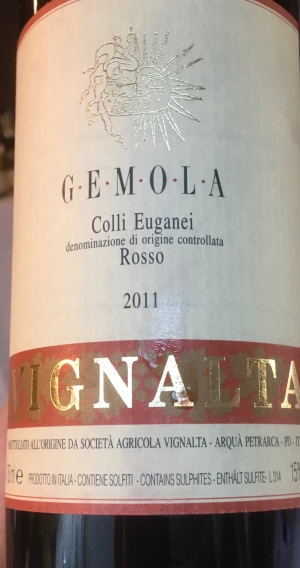 Vignalta Colli Euganei Rosso DOC “Gemola” 2011 made from 70% Merlot and 30% Cabernet Franc. There is 20 days of fermentation and maceration in stainless steel tanks. Pumping over 4 times a day at a controlled temperature of 27/28 degrees C. The wine is aged in new French oak barrels for at least 12 months.

Touring the Veneto with Vignaioli Veneti

The Veneto is a region of Italy I travel to often because of the wine and the food. I like to visit Venice and Verona but I usually stay on Lake Garda. Recently Vignaioli Veneti invited me on a press trip to the Veneto. The invitation read: Vignaioli 2017: Discover Veneto’s Top Grower-Producers, Growing Areas and Wines. 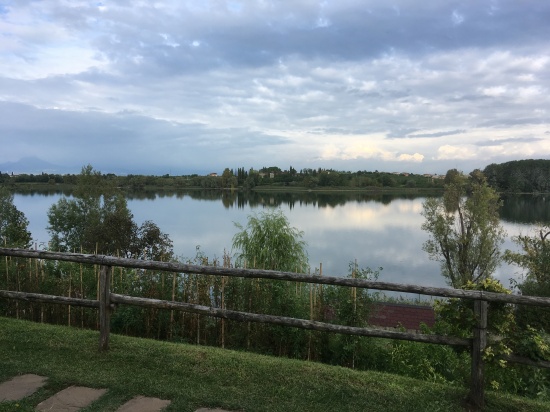 I would be staying in a hotel on Lake Garda.

Vignaioli Veneti is a newly-formed organization of over fifty of the Veneto’s top small producers. The president of the association is Michele Montresor and the Director is Giulio Liut.

The program included two Master classes conducted by Kerin O’Keefe, visits to eleven wineries, and dinner in some of the best restaurants in the area. There were 7 other journalists in the group and I enjoyed sharing these experiences and our conversations as well.

The first evening there was a welcome dinner at Ristorante alla Borsa, in the town of Mincio. It is a restaurant I have been to before, famous for its tortellini filled with cheese, meats or vegetables.

Mr. Montresor said the Veneto has historic cities of art and culture such as Venice, Padova and Verona, but they are only one aspect of this region. It stretches from Lake Garda to the Dolomites and to the Adriatic beaches. Vignaiolo Veneti’s mission is to establish the Veneto, its wines and wineries worldwide as a manifestation of quality. 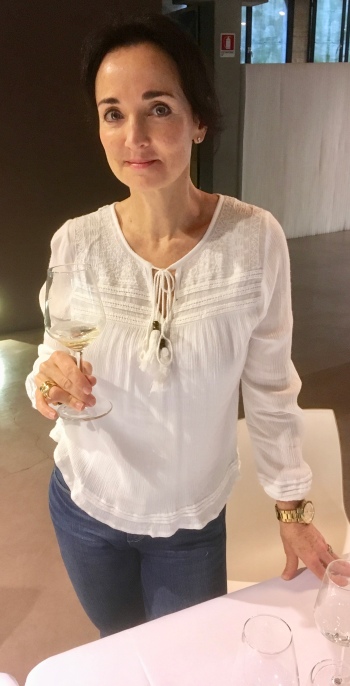 I was looking forward to the Master Class conducted by Kerin O’Keefe. Kerin reviews all Italian wines for the Wine Enthusiast magazine. She is the author of several books, including Franco Biondi Santi: The Gentleman of Brunello (2005), Brunello di Montalcino: Understanding and Appreciating One of Italy’s Great Wines (2012), and Barolo and Barbaresco: The King and Queen of Italian Wine (2014).

I have known Kerin for a number of years. At the Master Class there were 20 wines in all, 10 whites and 10 reds divided into 4 flights. Kerin felt that these wines were examples of the diversity of wines made by the member wineries and the Veneto in general.

Gorgo Custoza DOC San Michelin 2016 made from Garganega, Cortese, Trebbiano Toscano and Riesling. Fermentation and aging in stainless steel and malolactic fermentation does not take place.

La Morette Lugana Mandolare 2016 made from 100% Turbiana. Fermented in stainless steel. Kerin said that Turbiana is relative of Trebbiano di Soave, but it is a separate grape variety. Most producers use 100% Turbiana. She added that the best grapes come from the area close to the lake, where the soil has the most clay. There are 5 different types of Lugana wine.

Ottella Lugana Riserva DOC “Molceo” 2014 made from Turbiana (Trebbiano di Lugana). Kerin said some producers put both names on the label. Partial malolactic fermentation, aging for 16 months on the lees mostly in stainless steel and also in tonneaux and barriques.

2nd Flight
Cà Rugate Soave Classico “Monte Fiorentine” 2015 made from 100% Garganega. Fermentation is stainless steel for about 10 to 15 days. Kerin said that as of 1998 Trebbiano Toscano was not allowed in the blend.

Pieropan Soave Classico DOC “Calvarino” 2015 made from 70% Garganega and 30% Trebbiano di Soave. Kerin said this was the first “cru” made in 1971. The wine remains in glass-lined cement tanks on the fine lees for one year 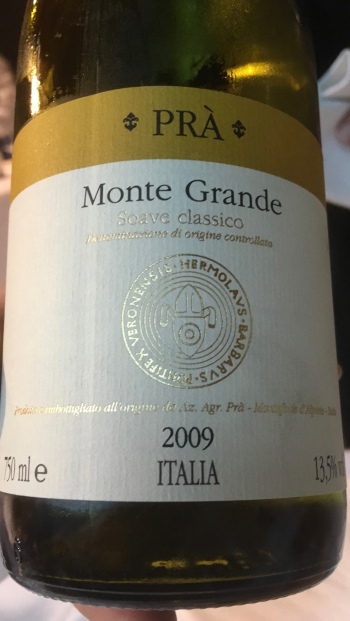 Pra Soave Classico “Monte Grande” 2009 made from 70% Garganega and 30% Trebbiano di Soave. The grapes are dried on the vines for one month and then destemmed and gently pressed. Fermentation is carried out in large 15/20 hl casks made of Allier oak. The wine is then left in casks to mature for ten months. The wine was showing no signs of age.
After visits later to the producers Pieropan and Pra, it confirmed once again that Soave is a great white wine that only gets better with age.

Bonotto Delle Tezze Prosecco Superiore Col Real Valdobbiadene DOCG 2016 made from 100% Glera. The grapes are harvested by hand and subject to soft pressing. After setting, the must is fermented in autoclave and after the wine is bottled,

My next report will cover the red wines we tasted.