From Puglia: The Wines of Azienda Vinicola Cantele

Paolo Cantele is the brand manger for the Cantele Winery in Puglia. We have met several times in the past, most recently at a tasting organized by Radici del Sud 2016 in Puglia where I tasted his wines again. I liked them and decided it was time to write about them. 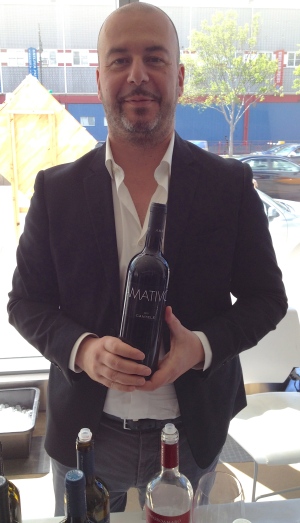 Paolo said the winery was founded in 1979 by Gianni Cantele and his sons Augusto and Domenico. The Cantele family now owns 50 acres of vineyards and manages/rents an additional 120 acres in the township of Guagnano in southern Puglia. Paolo said it is a family affair, his older brother, Gianni, is the winemaker and the other family members take part in running the winery. 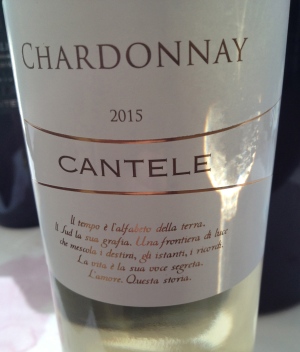 Chardonnay IGT Salento, the production area is Guagnano (LE) and Monternesola (TA) 100% Chardonnay.The training system is guyot and there are 5,000 plants per hectare. Harvest is the first ten days of August.

The grapes are destemmed, crushed and gently pressed. The must is cooled to 10C in order to allow for natural fining. Alcoholic fermentation is carried out in stainless steel vats at 15C. Paolo said the wine should be drunk young. It has fruity citrus flavors and aromas with a hint of juniper. 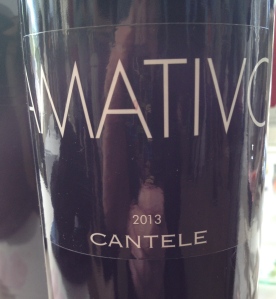 “Amativo” IGT Salento, Production area is Guagnano (LE) ,Sava (TA) and San Pietro Vernotico (BR) made from 60% Primitivo and 40% Negroamaro. The vines are head- trained (alberello) and there are 5,000 plants per hectare. Primitivo is harvested in early September and the Negoramaro in late September. After being destemmed and crushed, the must is macerated with skin contact for 12/15 days during which délestage is employed on a daily basis. Fermentation is temperature controlled. After malolactic fermentation is completed, the wine is aged in barriques for about 12 months. Paolo said the wine can age for 4 to 6 years. The wine has nice fruit hints of dried figs, spice and a touch of vanilla.

Negroamaro Rosato IGT Salento , production area Guagnano (LE) 100% Negroamaro. The training system is spur-pruned cordon and there are 5,000 vines per hectare. Harvest takes place the second half of September. Paolo said the grapes are macerated for 12 to 24 hours in order to extract the correct color from the skins and the classic aromatic notes of Negroamaro. The free-run must is fermented at 14/15C in stainless-steel vats where it remains until alcoholic fermentation is completed. The wine is aged in stainless steel until it is bottled. This is a well-balanced fresh wine with hints of strawberry and cherry. Paolo said the wine should be consumed upon release or with in a year or two.

Salice Salentino Riserva DOC, production area Guagnano (LE). 100% Negroamaro. The vines are pruned-spur condon trained and there are 4,500 vines per hectare. Harvest takes place at the end of September. After being destemmed and crushed, the must is macerated with skin contact for about 10 days. Fermentation is carried out at 25/26C. Once malolactic fermentation is completed, the wine is aged 1 year in 2-year-old barriques and about 6 months in bottle before release. The wine has hints of candied fruit, spice, and tea and is well balanced. Paolo said the wine is ready to drink but will continue to evolve for 3 to 4 years.

Primitivo IGT Salento Production area: Sava (TA), Torricella (TA) and San Pierto Vernotico (BR) 100% Primitivo. Vines are head trained (alberello) and there are 4,500 plants per hectare. Harvest is in early September. After being destemmed and crushed, the must macerates with skin contact for 6/7 days. Fermentation is carried out at 25/26C. The wine is then aged for about 6 months in barriques. The wine is ready to drink but will continue to evolve for 3 /4 years. The wine has hints of sour cherry and prune with spicy notes.