I first met Cinzia Merli, owner of Le Macchiole a number of years ago and was impressed by both her and her wines, especially the Paleo Rosso. I have followed the many changes she has made in this wine over the years and was very happy to accept an invitation to a tasting and lunch at Eleven Madison in NYC. We would be tasting a number of wines going back to 1996. 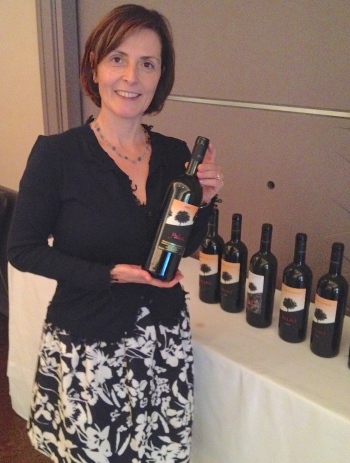 Cinzia said that making wine is a learning process and she is still learning. She feels that she can do what is correct with the land, making intense changes in the vineyard and cellar and does not follow convention. Over the years the name Paleo Rosso has remained the same but the grapes for this wine are different as is the aging process.

She said that she learns something every day, and does not know all of the answers but needs to figure it out. This is something I have never heard from a producer before.

Cinzia said Le Macchiole was one of the first wineries established in the viticultural zone of Bolgheri, located approximately 100 kilometers southwest of Florence along the Etruscan Coast in Tuscany. There are 22 hectares of land 2/3 covered by woods.

She said Bolgheri is among Italy’s famed wine producing regions, but this seemed far from a possibility in 1983, the year Le Macchiole was founded and a time when the area was known simply for close proximity to the sea and having abundant fruit and grain agriculture.

“My husband Eugenio and I started off with very limited, if almost no, resources” Cinzia recalls. “We gave up working his parents’ retail and restaurant business and bought a few hectares of land planted with wheat. We decided to plant vineyards starting with many varieties – sangiovese, cabernet sauvignon, cabernet franc, merlot, syrah, chardonnay, sauvignon blanc and vermentino – so that we might see what grew best on our little property. That is how our life project began and, for me, our learning is still in progress. I believe that Bolgheri is in the early stage of development. It has just become aware of its potential and understanding of which grape varieties give their best to each part of the different soils; much is still yet to be accomplished here.”

As they cultivated and learned the possibilities for their land, the Le Macchiole strategy became single-variety wines beginning with the 1994 vintage. This was an unusual, perhaps daring, plan for a winery of the region to commit to at the time. The idea took shape gradually over years of tireless experimentation by Eugenio and Cinzia and with the help of Luca D’Attoma, the winery’s long time consulting enologist, who began working with them in 1991. Ultimately, vinifying separate varieties has been extremely successful for the winery allowing the wines of Le Macchiole to demonstrate the potential of terroir in Bolgheri differently.

The winery’s planting density is between 5,000 and 10,000 plants per hectare and vine growing is rooted in organic farming practices. Manual harvesting is followed by the sorting of bunches and then berries on a double sorting table.  The winery continues to evolve in both the vineyards and in the cellar .

The Evolution of Paleo Rosso

In the beginning, in 1989, the idea was to make a blend of Cabernet Sauvignon and Sangiovese grapes. In 1993, some Cabernet Franc was added to the blend. “Cabernet Franc is usually seen as the ugly duckling of the family compared to Cabernet Sauvignon. It is greener, rougher, untamable, a difficult challenge to manage. In Bolgheri, Cabernet Franc is something thoroughly different. Its tannins are softer, it is extremely fruity and amazingly fresh, characteristics that help us make the best of every harvest”, said Cinzia Merli.

The decisive turn came in 2000: due to the exceptionally warm summer season, the winery was forced to add a higher amount of Cabernet Franc to the final blend to give the wine freshness and acidity. And it began to dawn on them that they were ready for the big leap: transforming Paleo Rosso into a 100% Cabernet Franc wine. They completely changed the wine’s structure while keeping its name and the winery’s signature style unchanged.

Le Macchiole vineyards stand on alluvial, rich, clayey, deep and resilient soil, with a solid skeleton and suited to enhancing each grape variety’s characteristics. The climate is mild owing to the influence of the sea and summers are generally warm with day/night temperature swings. On average, temperatures are higher than in other Tuscan areas and the harvest is usually in September.

All the wine growing stages, from pruning to harvesting, are carried out by hand. Great attention is given to harvesting and sorting of grapes, which is carried out first in the vineyards and then in the wine cellar, on a double sorting table. Organic farming methods are used in the vineyards for the sole purpose of practicing sustainable wine growing and maintaining a safe and healthy working environment. The basic idea is that human intervention on the plant should be kept to a minimum to respect its natural balance and give it a chance to strengthen on its own. This is very important to Cinzia because her husband Eugenio died of cancer in 2002 and she believes that the chemicals in the vineyard killed him. 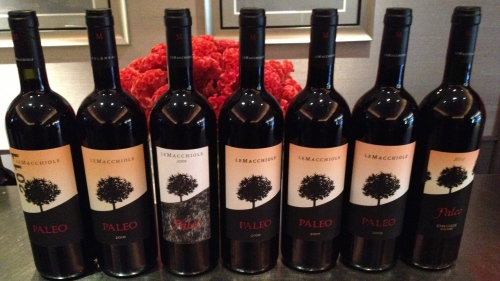 Paleo Rosso 1996 DOC– Bolgheri Rosso Superiore made from 85% Cabernet Sauvignon, 10% Sangiovese, 5% Cabernet Franc from the Casa Vecchia (1984) and Madonnina vineyards (1977). There was a green harvest in late July and the harvest was in late September/early October. Fermentation lasted for 14/16 days and the wine was aged for 22 months in 225 liter oak barrels. All of the wine is unfiltered. This was my favorite wine and I drank it with lunch. It could last for a number of years.

Paleo Rosso 2000 DOC– Bolgheri Rosso Superiore 70% Cabernet Sauvignon, 30% Cabernet Franc from the Madonnina, Casa Vecchia  and Puntone (1993) vineyards. Green harvest from July 20th to August 10 and the harvest was from September 4 to 8. Fermentation lasted for 20 days. The wine was aged for 18 months in 225 liter oak barrels. 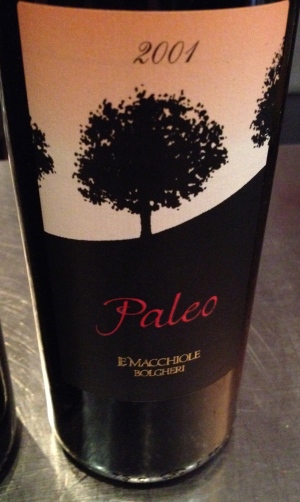 Paleo Rosso 2006  IGT Toscana 100% Cabernet Franc from the Casa Vecchia, Puntone, Casa Nuova, Vignone (1999) and Madonnina (2002) vineyards. Green harvest was in July and the harvest in the first two weeks of September. Fermentation lasts for 20 days. The wine is aged for 14 months in new 225 liter oak barrels and 10% in 112 liter oak barrels.

Paleo Rosso 2007  IGT Toscana 100% Cabernet Franc  from the Casa Vecchia, Puntone, Casa Nuova, Vignone and Madonnina vineyards. The green harvest was in late June and the harvest was the second and third week of September. Fermentation is for 20 days. The wine is aged for 14 months, 90% in new 225 liter barrels and 10% in 112 liter oak barrels. This wine seemed to have the most aromas of vanilla and oak. Cinizia said that because of the weather conditions it was aged differently.

Paleo Rosso 2008 IGT Toscana 100% Cabernet Franc from the Puntone, Casa Nuova, Vignone, Madonnina vineyards. Green harvest was in late July and the harvest was the second and third week of September. Fermentation for 20 days in steel and concrete vats. The wine is aged for 14 months, 75% in new oak barrels, 25% in barrels of second year use.

Paleo Rosso 2009 IGT Toscana 100% Cabernet Franc from the Puntone, Casa Nuova, Vignone and Madonnina vineyards. Green harvesting took place in late July and the harvest first and second week of September. Fermentation was for 20 days in steel and concrete vats and aging for 14 months, 75% in new oak barrels, 25% in barrels of second year use. Ciznia said this is a complex wine with floral and fruity notes with good structure.

Paleo Rosso 2010 IGT Toscana 100% Cabernet Franc from the Puntone, Casa Nuova, Vignone and Madonnina vineyards. Green harvesting took place in late July and the harvest first and second week of September. Fermentation was for 20 days in steel and concrete vats. Aged for 14 months, 75% in new oak barrels, 25% in barrels of second year use. Cinzia said the wine has good aromatic complexity, with lower alcohol than past vintages and with mineral notes.

Paleo Rosso 2011 IGT Toscana 100% Cabernet Franc from the same vineyards. Green harvest in late July and harvest is the second and third week of September. Fermentation for 20 days is steel and concrete tanks Aged for 20 months, 75% new oak (1/3 228 liters and 2/3 225 liters) and the rest in second passage barriques of 225 liters.